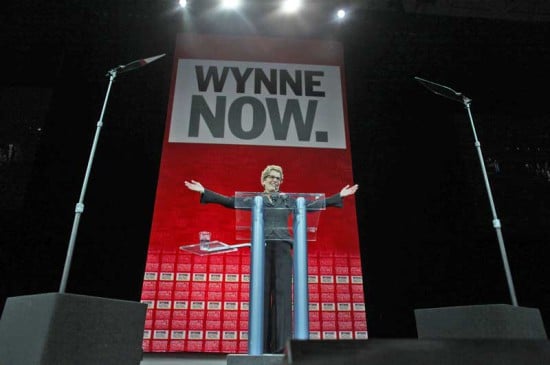 TORONTO—Ontario Premier Kathleen Wynne was bullish on her government’s recently passed budget during a Northern press teleconference. The passage of the budget, with the support of the NDP opposition, ensures the survival of the premier’s minority government and relieves the province of possibility of spring/summer election.

The premier noted that her government remains committed to “making minority government work” and said she believes her government has “accomplished a lot since I was sworn in four months ago.”

Among those changes were what the premier described as “an unprecedented investment in home and community care so that we can continue to improve the delivery of care to aging parents, grandparents where they need it and when they need it.”

The premier also referred to a $100 million investment in rural infrastructure. “To give credit where credit is due, this is an issue that I first heard about in Northern Ontario when I was Minister of Transportation,” she said.

Premier Wynne also referenced the funding for youth employment and skills training. “Young people need to be exposed to a wide range of employment and career opportunities,” she said. Premier Wynne said that her government is committed to growing the economy “without across the board budget cuts or unrestrained spending.”

She concluded her remarks by saying that she would be travelling across the province highlighting how the budget fits in with local priorities. “I am optimistic about where we are going, not only with manufacturing,” she said.

In questioning from Northern reporters during the press conference, Ms. Wynne quelled rumours of any move of the Ontario Lottery and Gaming Commission headquarters from Sault Ste. Marie, but added that she was “not going to pre-empt the organization” on administrative issues of how many jobs are located in the various offices.

A major portion of the conference centred on the recent announcement by Cliffs Resources that they were suspending their efforts on the Ring of Fire operations, throwing the timetable for the building of a new $4 billion Sudbury area smelter operation into question. Premier Wynne noted that her understanding was that the company was continuing its work.

“There are a lot of facets to these projects that we need to get right,” she said. “It is important that we get those right at the beginning of the process.” Prime among those facets is the need for First Nation engagement and consultation. “If we pay attention to engagement of First Nation communities at the beginning, things will proceed much smoother.”

The Ring of Fire remains a critical part of the province’s economic strategy going forward.

In answer to a question from The Expositor regarding the province’s strategy for tackling the issue of water levels, the premier said that she felt this was an issue that needed the combined efforts of all of the Great Lakes states and provinces. “There are many economic and environmental issues,” she said “The IJC (International Joint Committee) is also talking about these issues as well.” Premier Wynne noted that she had met with a number of Georgian Bay community and business leaders during the recent meeting of the Federation of Northern Ontario Municipalities in Parry Sound. “We are looking at the possibility of whether the issue qualifies as a national disaster,” she said. “Do we need to address it in that vein?”

The Northlander train service and the Ontario Northland Transportation Corporation dominated the questions from Timmins and North Bay, and the premier noted that the divestiture of that service was no longer the only option being considered. She noted that the concept of a role for Metrolinx in the mix may be a possibility, but that any funds raised in the North would be allocated to address the needs of the North. The $100 million new dollars in infrastructure spending in the North was a starting point, she said, but added that there is a clear need for a comprehensive transportation strategy for the North.

Premier Wynne has made greater consultation with Northern and rural communities a keystone of her cabinet and government’s approach to their mandate and the Northern media conferences are one of the concrete indications of that approach being implemented. This is the second such Northern media conference held since the premier was sworn in four months ago and the premier made good on her commitment to hold a cabinet meeting in the North within 30 days of being sworn in.