M’CHIGEENG—I am halfway into writing my own novel, and I started last year. And here I was standing in front of a man who has written over 100 books and has 10 more coming out this year. Wow!

On Monday, September 14, Eric Walters, the renowned Canadian author, gave a presentation at Manitoulin Secondary School. During the two one-hour presentations, Eric Walters kept the audience captivated by being animated and intense. Clearly benefitting from his previous teaching experience, he knew how to keep the young adults engaged as he shared his many stories.

According to his website, Eric Walters started writing in 1993 by writing the novel Stand Your Ground for his Grade 5 class. Before becoming a teacher, Eric was a social worker. He worked in a few different settings, including private practice, mental health treatment, and in an emergency department for 18 years. He drew on these many experiences to connect to readers. Mr. Walters has won over 100 literary awards, but he is most proud of the Children’s Choice Awards he has won.

Mr. Walters started his presentation by choosing two volunteers to make into characters in an imaginary book, giving us a glimpse into his creative process. Dustin McKenzie and I became two characters, and Mr. Walters made a story out of us. Mr. Walters told Dustin that his character was athletic, really liked hockey and was very nice, but was quite shy when it came to my character. My character was a nice girl who loved to read. Every time Dustin tried to talk to me, I giggled because he sounded like a little girl. By the end of the demonstration everyone in the room was laughing (okay maybe a few of us were blushing).

When I asked him how he makes up his characters, Mr. Walters said, “I see a potential character in everyone. In the book Stand Your Ground the main character was an actual boy in my class. This demonstration was to show that anyone can be a character. I always ask my students if I can use them as a character in my book, and they usually say ‘yes’.”

While Mr. Walters spoke, a slideshow played in the background, showing the covers of many of the young adult books he has written. He used visuals to accompany the stories he told, making them more real. He was able to keep the attention of the sometimes distractible audience with his fast pace, well-timed humour and serious content. 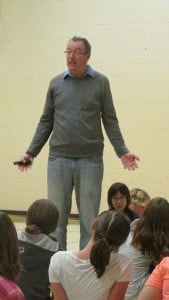 Mr. Walters had returned from Kenya only days earlier and spoke about his experiences during the presentation. He paused at several emotional moments and made eye contact with members of the audience. He spoke about the things that impacted him the most. In 2007, Eric Walters and his son travelled to Kenya for the first time to visit a family friend. It was in the market of Kikima, Kenya where Walters met Mutuku. Mr. Walters found out that Mutuku was one of 500 orphans in the Mbooni Region of rural Kenya. Mr. Walters became a Kamba Elder in the Mbooni region and a local hero. The Rolling Hills Residence is home to 55 orphans, but the Creation of Hope started with one orphan, then four and now the Creation of Hope supports over 400 orphaned and impoverished children in Mbooni.

A curious student asked with which character Mr. Walters most connected. He had to think about it before for a short moment before answering: “I connected most with Baraka.” The book called My Name is Blessing is about a small boy named Muthini (this means suffering in Swahili) who was born with a physical disability. This boy lives with his grandmother, and eight cousins, in a small home. Mr. Walters sponsored this boy. He now goes by the name Baraka which means “blessing.” This true story clearly continues to inspire the author.

Another true story that continues to inspire Mr. Walters is also one of his best known books. Run is about a boy who runs with Terry Fox in the Marathon of Hope. This inspirational story helps young readers connect with the Terry Fox story. I asked him what the book Run means to him. Mr. Walters gave a simple smile and said, “Terry is one of my personal heroes, and I have never even thought about taking a penny from that book. Every cent made from this book goes to the Terry Fox Foundation and to finding a cure for cancer.”

Mr. Walters has written 101 books, and he said he has another 10 new books coming out this year. How does a writer produce up to eight books a year? Mr. Walters says that he is always writing more than one book: “There are always several stories flying through my head.” Tell Me Why took him eight months to write, but he said, “Without the other stories being written at the same time, it would have been longer.”

“Everything inspires me to write. Everything I see, and everyone I talk to is something new that becomes a part of a story. I am constantly writing. I write before I go to bed, at the breakfast table, and even in my tent during a sandstorm in the middle of the Sahara Desert.”

Eric Walters’ presentation provided an inside view to the issues of rural Kenya and made it clear that every small action is making a difference. When Mr. Walters was finished, he received a round of applause from MSS English students, Writer’s Craft students, as well as visiting students from Lakeview Public School and Wikwemikong High School. As he was leaving the school, Mr. Walters checked his phone. There was a missed call from the Governor General’s Office giving him details about receiving the Order of Canada, which recognizes “outstanding achievement, dedication to the community and service to the nation.”

He clearly is deserving of this honour for his many contributions to children’s literacy and international development. As a bonus, he may have encouraged a few members of the MSS audience to become readers or maybe even activists.