A black Chevrolet vehicle entered the check and upon the officer talking with the driver a strong odour of marijuana was detected. This led to further investigation and search of the vehicle which produced a quantity of marijuana and a large amount of cash being seized.

As a result of this investigation, the driver of the vehicle, a 42-year-old woman of Sudbury, has been arrested and charged with the following offense: possession of a controlled substance for the purpose of trafficking.

She was later released on a Promise to Appear to the Ontario Court of Justice in Gore Bay on the August 31, 2015. 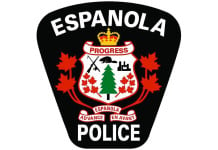 Huge haul of drugs and weapons in Sudbury