EDITOR’S NOTE: This weekend, members of the Sheguiandah First Nation will head to the polls to elect a new chief and council. Three are running for the position of chief: Andrew Aguonie, Orville Aguonie and Ron Aguonia (Neganiwina). Orville Aguonie’s interview before the Friday election follows here. Despite repeated attempts to contact the other candidate, this newspaper was unable to reach them.

Ron Aguonie believes in the five Cs of growing community

After almost half a century away from his home community of Sheguiandah First Nation, Ron Aguonie is ready to return to offer a fresh perspective, free of bias, to govern the First Nation.

He explained that this is not the first time he has run for chief, putting his name on the ballot three elections ago which saw his brother Orvillle Aguonie elected as chief. “I’d like to try it one more time,” Mr. Aguonie added.

“I’m not tainted by all the family squabbles happening on the reserve,” the candidate for chief noted.

“I’m a handyman—I take care of people’s issues,” he said, explaining that he would bring the same outlook that he brings to his successful business to overseeing the community, “in a good and responsible way.”

Mr. Aguonie said he is a firm believer in the ISO 9000 method, which he would bring to the structure of the Sheguiandah First Nation. ISO 9000 is a quality management standard that presents guidelines intended to increase business efficiency and customer satisfaction. The goal of ISO 9000 is to embed a quality management system within an organization, increasing productivity, reducing unnecessary costs, and ensuring quality of processes and products.

“I would get it in place and get people to stick with it so the reserve can move forward in a positive way,” he explained.

The candidate also believes that guidelines must be set in place for each job title that do not change with each election, setting a structure of continuity and stableness. While the chief needs to be involved with the goings on of the band office, this should be primarily left to the staff, he believes, leaving the chief to focus on being a representative to the community locally, provincially and federally.

Mr. Aguonie would also commit to bringing an economic development officer into the band office.

He is also a firm believer in the ‘five Cs’ of growing community: communication, collaboration, children, culture and care.

“If elected as your chief, it will be my mandate to bring community members together, to work together, to share ideas and find mutually agreeable solutions that will make Sheguiandah a better community for everyone,” he said.

“Once we understand the value of our community and can recognize what each of us has to share and offer one another, we will then see the potential of our community to grow in a way that will create a legacy for our children and future generations to follow,” he concludes.

Voting for Sheguiandah First Nation chief and council will take place this Friday, November 6 at the band office.

Andrew Aguonie: Keeping  on the path of community healing in Sheguiandah

Andrew Aguonie has two main platform planks in running for the position of chief of Sheguiandah First Nation. “I would like to keep things much the same,” he said, “and enhance what is there.” But first and foremost amongst those areas in which he would like to see enhancements are education and housing.

“Those are the most pressing areas of need in our community,” he said. “If we are going to prosper as a community, if our members are going to be able to get ahead, they need to have the education that qualifies them for better paying jobs, and everybody needs to have a place to live.”

Mr. Aguonie, a father of four, is currently employed in construction, but he spent many years working as a youth mental health worker at Enaahteg Healing Lodge in Victoria Harbour, in southern Ontario.

“I approach everything with kindness and respect,” he said. “That is what Anishinaabek means, kind people. Be kind in everything you do.”

The candidate notes that most of the skillset he brings to the council table is based on “general lifeskills,” but that his approach to dealing with issues in the community are founded on the principle of putting people before the paper. “We are dealing with peoples’ lives,” he said. “We have to separate that from the dollars.” The focus must be on people and their needs first.

Mr. Aguonie said that healing is one of the things that the Sheguiandah community needs. “It is one of the things we have to look at,” he said. “We have to find our way to a point where people are not afraid of each other.” Mr. Aguonie said that “if we can open dialogues between ourselves, keep the peace and remain civil to each other,” the community can start to build the bridges that will close the rifts that have plagued the community for years.

One of the first tasks facing the new council will be economic development,” said Mr. Aguonie. “We need jobs for our community members.” He pointed out that the band has a large amount of heavy equipment that could be leveraged, with band members educated in their proper use, to look at taking on off-reserve building projects.

Orville Aguonie says he is ready to bring his past years of experience—four as a band councillor and four as chief—back to the table to once again serve his community of Sheguiandah First Nation as chief.

“With my previous experience, I plan to hit the ground running,” Mr. Aguonie told The Expositor. “I know what needs to be done.”

If elected, Mr. Aguonie plans to implement a custom election policy “to get out from under the Indian Act so the community decides how council is elected.” This, he says, would be tailored to the community’s needs.

“We have so many issues on our reserve—the single biggest one is corruption,” Mr. Aguonie claims, pointing to redirected government funds, employees being hired without funding and pre-election home renovations. He also pointed to the half-million dollars, the community’s portion of the Northland Power wind farm money, that was, he says, claimed one year ago. “Where has it been spent?” he asks.

From his previous time as chief, Mr. Aguonie said there are numerous projects that were started but never finished due to the protests of two band councillors that all but shut down band council proceedings in 2012. One of these is a 48-lot subdivision housing plan that would see lots developed and then built upon as needed. For economic development, he pointed to a grant awarded to the First Nation to see the roundhouse up and running as a business, with plans stopped during the protest.

“I’m also really looking at agriculture,” Mr. Aguonie says. The Sheguiandah First Nation owns 600 acres of farmland that he would like to see developed into a sustainable farming venture that could provide jobs as well as affordable, good food for the community.

Land claims is another issue Mr. Aguonie would like to see brought to the forefront. “There are a number of land claims that need to be looked at and we have had no update on them in two years,” he adds.

Mr. Aguonie notes that he is happy to see a federal Liberal government elected to power and would look forward to working with them.

If elected, the candidate says he would give a monthly chief’s report on all of his doings as well as hosting public finance meetings at least twice a year to keep the community apprised of its finances.

Mr. Aguonie says he would also like to see the volunteer fire department brought back, more recreation for the youth, bringing Internet back to the recreation centre as well as more programming for elders. He also has the idea of repurposing the four-plex apartment building into assisted living apartments for the elders of the community.

Mr. Aguonie says he believes decisions should always be based on ‘is it good for the community?’ and ‘how will the community benefit from this?’

He spoke of the family divide that has plagued his community for years and would bring in professional help to teach courses to its members on conflict management.

“It’s always been a have-not community,” Mr. Aguonie says. “If we don’t change that now, it’s every person for themselves.”

“I bring honesty and integrity to the position and I let my record stand on that.” 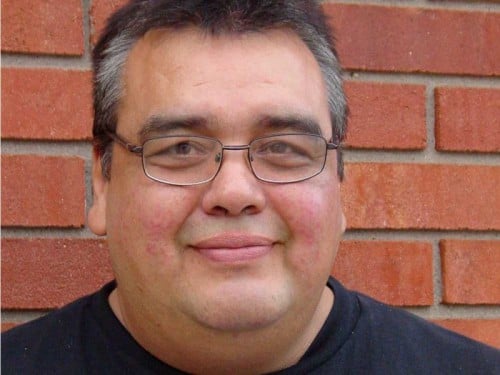