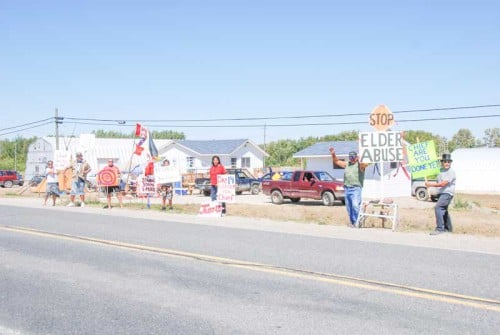 SHEGUIANDAH FIRST NATION—Today, Wednesday, August 22, marks day 30 of the protest on the Sheguiandah First Nation which has the community at odds over the protestors’ main goal—to see the resignation of Chief Orville Aguonie.

The protestors first began their campaign one month ago to bring to light alleged issues of nepotism, criminal charges against the chief and what Councillors Derek Assiniwe and Kevin Mishibinijima, who lead the protest, call unfavourable practices in band administration.

At the beginning of the protest, located along Highway 6 in that community, the councillors and their supporters simply wanted a meeting with the chief to air the issues they feel are plaguing the community but a sticking point between the chief and his supporters on the one side and the protestors on the other has remained—the difference between holding an all-inclusive meeting with community members as opposed to one with just band members, those who are status members of the Sheguiandah First Nation—causing such a meeting to not take place.

Last Thursday, Northern media outlets reported that the protestors had the backing of the United Chiefs and Council of Mnidoo Mnising (UCCMM), thanks to a letter from Councillors Assiniwe and Mishibinijima. A later broadcast restated that the protestors had the backing of two UCCMM elders, Josh Eshkawkogan and Gloria Oshkabewis-McGregor, not the organization itself. A press release from Hazel Recollet, UCCM CEO, stated: “This is to advise that the United Chiefs and Councils of Mnidoo Mnising is not involved in the internal issues of any First Nation. We respect the autonomy of each First Nation. We pray that there will be a positive resolution to the issues.”

Mr. Mishibinijima told The Expositor that the protest group had sent a letter to the UCCMM, stating that they no longer recognize Chief Aguonie as their leader.

A main topic for the chief has been the $60,000 in rent arrears owed to the Sheguaindah First Nation by its members and the fact there are those who have not paid in years—a practice he has stopped. Those who do not pay their rent face eviction.

“He’s focussing on housing, but there’s other issues than just that,” Mr. Mishibinijima said, noting that his group has hired the services of a lawyer. “We’re still a peaceful protest,” he reiterated.

The councillor said that three band employees who are in support of the protest group, and were employed by the band, have since been let go.

“The three employees that were fired were asked to meet with Alison (Aguonie, acting band manager and wife of the chief) for a Monday meeting and they asked me to attend with them,” Mr. Mishibinijima explained. “When she found out I was coming, she cancelled the meeting.”

The chief agreed, noting that in fact four members had been let go, all with the approval of a human resources lawyer.

When asked about the chief’s accusations that the majority of those on the picket line are not band members, Mr. Mishibinijima replied, “The people on the protest line are here for support, they’re not agitators.”

The councillor pointed to a press release sent out to the community by the chief, which reads, “I know that the law-abiding community members are frustrated that the elders’ centre, recreation centre and mailboxes have been taken over by these so-called protestors and outside agitators.”

“We’re not blocking the rec centre,” Mr. Mishibinijima replied. “Anyone is welcome to drive through and use it. A few elders came and asked if they could use it for bible study and we welcomed them to do that, although they didn’t show up. The mailboxes aren’t blocked from use either.”

“I don’t think that Orville understands that this a peaceful protest,” he added. “Who would have thought we’d be here for 27 days?” he noted on Sunday.

Indian and Northern Affairs Canada has been in contact with both groups, asking for both parties to come up with a mutual date for a meeting. The protest group requested the earliest date possible, while the chief requested a meeting in September, which is the confirmed date and one that upsets both protesting councillors, knowing that the protest will be prolonged that much longer.

A band council meeting was scheduled for Monday, but both councillors decided that due to what they considered unfair notice of the meeting, and at the advice of their lawyer, they would not attend. “There wasn’t proper notice—just a poster in the band office window,” Mr.Mishibinijima said.

“I was going to ask for their resignation,” Chief Aguonie said of Councillors Assiniwe and Mishibinijima.

In that same press release sent out to the community, the chief writes, “Councillors Derek Assiniwe and Kevin Mishibinijima are attempting to have all financial transactions frozen. If this happens, services such as Ontario Works, medical transportation, back to school allowances, all elder and youth programs and health services will be affected.”

The letter the chief refers to is dated August 10 and appears on Sheguiandah First Nation letterhead and is addressed to Taylor Wood of TD Canada Trust in Sudbury. (The First Nation banks with TD Canada Trust.) In that letter, Mr. Mishibinijima writes, “With the divide in leadership, Councillor Derek Assiniwe and myself, Kevin Mishibinijjima, councilor, are requesting that all Sheguaindah First Nation funds be suspended until further notice. Councillor Derek Assinewai and I (Kevin) constitute a quorum of leadership as per the Indian Act.” The letter urged Mr. Wood to contact the councillors should he have any questions and was signed by both councillors.

The chief explained that the letter was taken seriously by TD Canada Trust, and that transactions by the First Nation were indeed frozen for a couple of days.

“That’s a breach of trust,” the chief said. “They misrepresented themselves. They swore an oath of office when they were sworn in as councillors (November 2, 2011), and as far as I’m concerned, they’ve broken that oath.”

While the two councillors may have been under the impression that they indeed had quorum and could direct such things, a letter dated August 17 to the Sheguiandah First Nation from Monique Doiron, director, governance, individual affairs and government relations, Ontario region, with Indian and Northern Affairs Canada, explained that the quorum for the council of the Sheguiandah First Nation is three.

In response, the councillors shared a letter written on their behalf by their legal counsel, which states: “Under the Indian Act, the operations of the band accounts should be performed by the oversight of an executive council steered by their chief. Unfortunately, council meetings have not been held and when they are held, financial records are not adequately provided. As a result, our confidence in the operations of the band’s finances had been adversely affected,” the letter states.

“Having been shut in the dark, with respect to the band’s finances, we, as the majority of the elected council of Sheguiandah (MECS), felt that it was essential to hold the chief and band staff to account,” the letter continues. “This decision (contacting TD Canada Trust) was not taken lightly, and was made only to ensure the chief comply with the Indian Act and provide to us (MECS) the proper documentation of the band’s finances. This is a legal requirement, which the chief must fulfill.”

“This is our moral and legal duty owed to our community, as we act as their elected councillors under the Indian Act,” the letter states. “We want to ensure that the operation of the band’s finances are sound. We withdrew our support of the band’s accounts only after being shut out of the oversight process. Spending can resume once again when MECS is included in the oversight process.”

“The majority of people are on side with the band office,” the chief said. “Out there (off of the reserve) if you don’t pay rent, you get evicted. It’s just people resisting change—change for the better.”

“Our coffers from the government are getting smaller and smaller,” Chief Aguonie continued, noting that the increase in education is only two percent each year—not enough to send each child to continue their education.

When asked about the protestors’ claim that they will hold strong until they receive his resignation, the chief replied, “I’m here until October 2013 and that’s an awfully long time to be sitting on the side of the road.”

While The Expositor was at the encampment on Sunday evening, supporters had brought by a roast with fresh bread, potatoes and vegetables. A young man sat by the sacred fire, drumming and singing softly while children ran around, playing before supper. Mr. Mishibinijima pointed to the new, improved shelter located beside the highway, proud of the group’s work. “We’re still holding out,” he added.

A band council meeting has been rescheduled for next Wednesday, August 29 at 10 am. 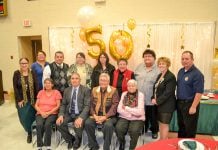