LITTLE CURRENT-Shovels have begun to chew into the ground at the site of the Manitoulin Great Spirit Circle Trail (GSCT) hotel in Little Current’s newest hotel-beginning a year-long construction process that will see a modern 58-room facility with conference and meeting room facilities for up to 350 participants.

“Things are really coming along,” said GSCT manager Kevin Eshkawkogan, whose organization is spearheading the development on behalf of eight First Nation community proponents. “We have 95 percent of the site preparation work completed. This Friday we will be meeting to finalize the bidding process for the footings and foundations.”

The next step in the process will be to begin lining up the local contractors and service providers for the construction project and beyond. We deliberately set it up this way to provide lots of opportunities for local contractors, both Native and non-Native suppliers,” said Mr. Eshkawkogan. “People who are interested in bidding on some of these opportunities should get in contact with Perry and Perry Architects.”

The architectural firm is acting as construction managers on the project, as opposed to general contractors as previously reported. “One of the reasons we decided to go the contracting manager route as opposed to general contractor is to maintain better control over the project,” said Mr. Eshkawkogan. “There will be a lot more invited contacts with this project.” The developers’ hopes are to maximize the local economic impact of the construction phase of the project.

“Of course the project has to adhere to budget and to time-lines,” cautioned Mr. Eshkawkogan, “but we feel we have a good viable project here.”

Much of the development of this project was designed with an eye to maximizing the economic potential for the region. “The conference centre is designed for meetings of 325 to 350 people,” noted Mr. Eshkawkogan. “While the hotel cannot accommodate that many, there will be a significant overflow that will have to be taken up by other accommodation providers in the area.”

Although rumours have been rife over the status of the project, Mr. Eshkawkogan noted that the project is definitely going ahead. The financing is fully in place and the partners involved in the project are fully engaged. There were a couple of original proponents in the project which, for their own reasons, pulled out almost three years ago, but those on board after that have remained so.

The bar for involvement is relatively high, with a $250,000 buy-in required from the member communities. “It is a very significant investment for smaller communities to make,” noted Mr. Eshkawkogan. “The decision to go ahead with this was not made lightly.”

The hotel will be branded, but not as rumours might have had it with a major name-brand. Instead, the GSCT will be taking on the role of franchiser-this project may well become the pilot model for other hotel and accommodation products. “We have a number of other communities that have expressed an interest in doing something like this for their communities,” said, Mr. Eshkawkogan. “This project will be closely watched.” The consortium is not ruling out building even more accommodation on Manitoulin in the future.

Jeff Perry, of Perry and Perry Architects, said that he was very excited to be part of this project. “We were brought on board three years ago, and although there have been a lot of delays along the way, collecting funding and so on, we are confident that things will proceed smoothly from here on in,” he said.

“The hotel will feature 58 rooms, a mixture of standard units and some more desirable suites,” said Mr. Perry. With the hotel’s choice location overlooking the North Channel and the Little Current Swing Bridge.

The acoustics in the new conference centre’s meeting halls will be the result of a careful selection of materials and construction. “This will be a multi-purpose facility that poses a number of challenges that must be taken into account,” said Mr. Perry. “You have to be very selective in your choice of materials.”

One of the most exciting facets of this particular design, said Mr. Perry, was the extensive use of wood in the project. “It has good sound qualities, and that is certainly a plus,” he said, “but there are also considerations in sustainability and it is culturally appropriate in the context as well.”

The site plan for the hotel has been submitted to the Northeast Town for review, and it was expected to be presented to the municipal council yesterday (Tuesday). 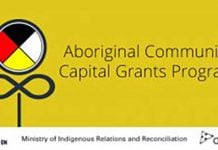 New Cliffs smelter a sign of hope for the North