MANITOULIN—Manitoulin Island’s many miles of shoreline feature an unusual companion, shoreline road allowances that run 66-feet along the highwater mark. Put in place during the early days of settlement when the Island was first surveyed, these road allowances are often left unopened, but since the 1990 Manitoulin Land Agreement are considered municipal property.

“The problem is, people think that is the same as being Crown land,” said surveyor Gord Keatley of Little Current when contacted by The Expositor. “It isn’t at all the same.”

Mr. Keatley explained that being an unopened road allowance means that people have “the right to pass and repass.” At least “within reason.”

But what has been happening in many Island municipalities is that some people believe they can access unopened road allowances as they wish. Setting up tent sites, starting campfires and otherwise utilizing the land for their own recreation.

“It’s becoming an issue for a lot of municipalities,” agreed Assiginack CAO Alton Hobbs. “From a municipal perspective, that opens up a host of liability issues.” Those issues can manifest themselves in costs.

“People assume that the property in front of their camp or cottage is private property and they set about landscaping it to their own enjoyment,” said Mr. Hobbs. Sometimes they even place buildings on the shoreline road allowance. “When you build things on it, you are, in fact, trespassing and creating a liability for the municipality.”

Central Manitoulin CAO Ruth Frawley noted that the municipality has had to deal with the issue regularly. “We always get calls about it,” she said. The municipality has a care and control bylaw that allows for the adjacent property owner to utilize the property in a low-key manner. “That’s things like planting flowers or mowing the grass,” she said. “But these days we encourage people to not interfere with the shoreline.”

“People are allowed to walk by, but they should not be interfering with the adjacent property owner’s enjoyment of their own land,” Ms. Frawley noted. “If people are wondering what they can and can’t do they should look at our bylaw. It is posted online on the municipality’s website.”

“We really don’t have a lot of shoreline residences,” said Gore Bay CAO Stasia Carr, “so the issue really doesn’t affect us.” As a fairly compact municipality, Gore Bay’s shoreline properties are mostly inhabited by either municipal buildings or organizations like Manitoulin-Sudbury District Services.

But when the conflict involves next door neighbours, it can become a real challenge. “I had one client on Lake Manitou whose neighbour liked her spot on the lake better than their own,” said Mr. Keatley. The neighbour set their canoe on the shore in front of his client’s property and set about putting the land to the way they wanted it.

“She was constantly having to look at her neighbour,” recalled Mr. Keatley. “Eventually, she just got tired of it, sold the house and moved away.”

“People just don’t understand the difference between Crown land and a road allowance,” he said. “They are not the same. The closest analogy would be a highway. You wouldn’t set up camp in the middle of a highway and you can’t just settle down in the middle of one. You have the right to travel back and forth on the highway, that’s it.” 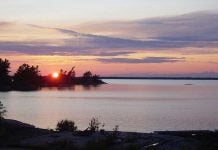