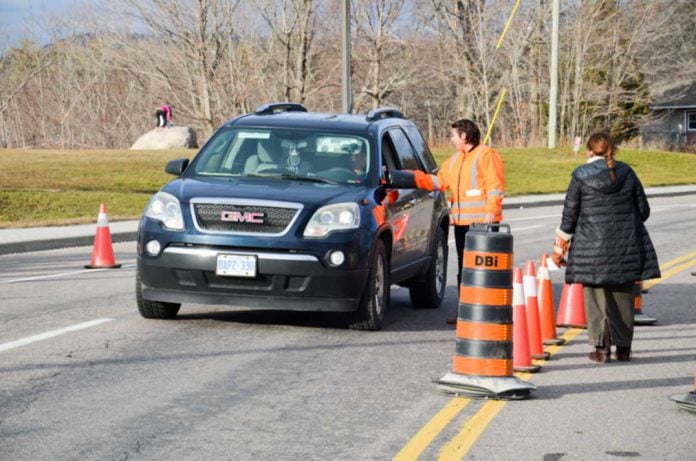 WIKWEMIKONG—This past week saw plenty of action on the Standing Rock front, with an information session at the arena in Wikwemikong and an information picket slowing traffic travelling through Whitefish River First Nation on Saturday afternoon following a grandmother pipe ceremony in the community centre.

But protest turned to jubilation when it was learned that the US Army Corps of Engineers (USCAE) announced December 4 that it was refusing to grant a permit to allow the Dakota Access Pipeline to travel under Lake Oahe, a reservoir formed by a dam on the Missouri River that acts as a water supply for the nearby Sioux Reservation of Standing Rock.

The oil pipeline, which snakes some 1,885 miles from Stanley North Dakota to Patoka, Illinois, was originally slated to cross the Missouri River near the North Dakota town of Bismark and nearly is complete, except for the one-mile link beneath the lake.

The protest against the Texas-based Energy Transfer Partners LP pipeline began with one woman setting up a tent to oppose the behemoth corporation, but quickly grew into a series of tent cities with supporters numbering in the thousands drawn from across the globe. Several Manitoulin Island residents made the pilgrimage to Standing Rock, lending their weight to the scale of world opinion and some residents, like Rosette Toulouse of Wikwemikong, are currently braving the aftermath of the recent blizzard at Standing Rock.

While shouts of jubilation filled the air at Standing Rock during the initial euphoria in response to the announcement from the USCAE, the timing of the announcement (with an avowed supporter of the pipeline about to take control of the White House) and the spectre of a court challenge requesting the USCAE permits be ignored and the pipeline be allowed to be completed still pending, have left some cynical at the news.

“It’s great that (US President Barak) Obama has finally come out on the side of the people who want to protect the water,” said Little Current resident Peter Jones, who travelled to Standing Rock with his family earlier this fall. “But I think it is BS. I think they will drill it anyways and pay the fines. They won’t let a bunch of Indians stop them.”

Many of the protesters have vowed to remain in place until it is clear that the DAPL has indeed been stopped in its tracks. The Standing Rock Sioux leadership have indicated that they will not oppose the pipeline being re-routed to another location (although any new location will likely also cross the Missouri River), but the Indigenous Environmental Network, a group that opposes the pipeline, say they will continue to block the construction.

At an information session in Wikwemikong former M’Chigeeng Chief Joe Hare, his wife Susan, an Island lawyer and indigenous rights activist, and their sons Forry and Thomas gave presentations on Standing Rock.

Ms. Hare put her legal training to use at one of the many “legal tents” at the camps in Standing Rock, helping protestors prepare for the inevitable clashes with the police by prepping ‘get out of jail’ lists, including important information for individuals, including medical issues, next of kin and documentation.

Ms. Hare was sporting a lime green baseball cap that she wore at the camp. “I complained that it was far too visible a target,” she said, only half-jokingly.

Forry and Thomas are both strapping young men and they took up positions at the front, facing tear gas and rubber bullets, many of which were fired in contravention of guidelines on their use.

“They are supposed to aim at the legs,” noted Mr. Hare. But evidence coming from infirmaries in the area clearly indicate those regulations are not being followed.

During the Wikwemikong presentation Joe Hare announced that he would be collecting gifts for Christmas to take to Standing Rock. It was unclear at press time Monday whether he would still be making the journey south, but given the determination of the water protectors in the camp who have vowed to continue to stand guard on the waterway, it is likely that he still intends to make the journey.

“It is cold there,” agreed Thomas Hare. “There is no bush to cut the wind, it’s basically wide open.”

“Not everyone can afford, or is able, to make the trip,” said Mr. Hare. “This is a way that people can help even if they can’t go themselves.”

The following afternoon, a group of people whose ages crossed all cohorts, gathered in a circle in the community centre at Whitefish River First Nation while elders Gloria Oshkabewisins-McGregor, Genny Jacko, Christina Agawa and Arlene Pitawanakwat lit their grandmother pipes for a ceremony in preparation for an information picket that slowed traffic on Highway 6 from 2 pm to 5 pm.

Following the pipe ceremony, there was a feast to fortify against the coming cold, before the group headed out, signs and placards in hand to inform passing vehicles about the situation at Standing Rock.

Police cruisers sat on both sides of the road, well back from the picket with lights flashing, and large orange and black pylons were set out on the side and middle of the road to delineate where the pamphlet distributors were to stand.

Organizer Crystal Clark-McGregor took a moment out from videotaping the picket to talk about how she came to be involved.

“Sebastien (Shawanda, a young man who had been at Standing Rock) came to me and asked about doing something to help inform people about what was going on there, what was at stake,” she said. “We talked to the principal at Espanola High School about doing something at the school, but there wasn’t enough time to do something there because there is so much going on at this time of the year.”

Mr. Shawanda said that he had been deeply affected emotionally when he saw the younger youth fighting for something they believed in at Standing Rock. “We spent five days down there,” he said. “It was calm and peaceful while we were there. It didn’t get violent until after we left. It was just a lot of people who had come to North Dakota to stand with the people.”

When he saw the images of what was happening after he left, the attacks by company security personnel with dogs and tear gas on crowds of protestors, he felt he had to try and do something to make people aware of what was going on. He had a sense that things were going to get even worse.

In the last couple of days, as many as 7,000 American veterans have converged on the camps at Standing Rock to set themselves as a human shield between the police, troops and company security as a December 5 deadline to evacuate the area loomed.

During the Wikwemikong information session, Mr. Jones noted that he believed the struggle against pipelines was going to get much closer to home with the federal government’s recent greenlight on two western pipelines.

“You won’t have to go that far to join the fight to protect the water,” he said. “It is happening in our own back yard.”