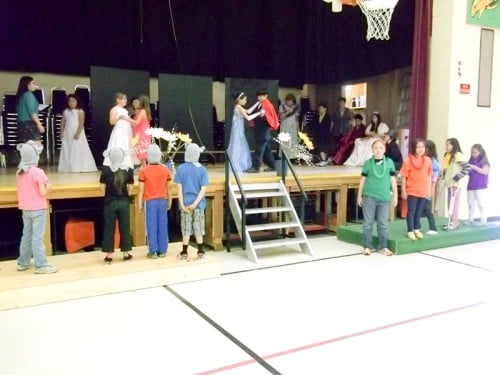 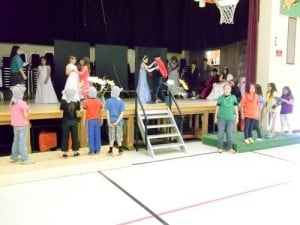 M’CHIGEENG—Prepare to be enchanted this Thursday, May 17 as Lakeview School in M’Chigeeng will perform the well-loved tale of ‘Cinderella,’ with the curtain lifting at 7 pm.

“The cast (consisting of over 30 students) have been practicing for the last two months,” Colleen Freeman, one of the Lakeview teachers involved in the production, told The Expositor. “The director (fellow Lakeview teacher) Sara Winberg chose the play because she felt it would be a great way to involve younger students as well as older, those who have experience from our 2011 Christmas production of ‘Scrooge’.”

Also involved in the production are Lakeview music teacher Joanne Smith, who will be leading the live choir, and Kristin Farquhar.

“It’s been a group effort,” said Ms. Freeman. “All the teachers at the school have been really supportive, as have the parents and community members, assisting with costumes and props.”

The production not only features a cast of over 30 students, but also a production crew of senior students helping with sound, lighting, props, sets and curtains.

‘Cinderella,’ also called ‘The Little Glass Slipper,’ was a folk tale first published by Charles Perrault in 1697. The fairytale tells the story of a widower with a young daughter (Cinderella) who marries a mean woman with two daughters before dying and leaving his daughter to the care of her cruel stepmother. Cast into servitude, Cinderella is forced to wait on her stepmother and sisters. The family receives an invitation to a royal ball, where the prince will choose his future wife. Cinderella is denied by her stepmother to attend, while her stepsisters eagerly go, fighting for the prince’s hand. A fairy godmother appears and magically transforms Cinderella from a servant into a lady and sends her to the ball, unbeknownst to her family, in a pumpkin turned to gold carriage. She and the prince meet and fall in love, but Cinderella is forced to flee before the clock strikes midnight and her fairy godmothers magic wears off. In her haste, Cinderella leaves behind a glass slipper, which the prince uses as a tool to scour the land looking for his lost love, eventually finding Cinderella and marrying her.

“The students are really looking forward to the performance on Thursday,” said Ms. Freeman. “It will be a lot of fun, we even have two Grade 8 boys playing the ugly stepsisters. We are hoping everyone from across the Island will come out and support the kids.”

“The Cinderella cast has been working extremely hard,” added Ms. Winberg. “The students have put in countless hours practicing this wonderful play. After many hours of rehearsal the actors are in full character and the magic has come alive!”

The family production will also feature songs from the Disney film of ‘Cinderella,’ Ms. Freeman hinted.

The Lakeview School production of ‘Cinderella’ will be held Thursday, May 17 at 7 pm at Lakeview in M’Chigeeng. Admission is free. For more information contact the school at 705-377-4988.