SUDBURY—A report released last week shows that Northern Ontario remains hardest hit by the opioid crisis in Ontario. The province saw a dramatic increase in the number of opioid-related deaths in the first year of the pandemic and another increase over the second year.

The Office of the Chief Coroner of Ontario released the preliminary figures, which also noted an overall drop in the death rate in March.

“It is definitely disproportionately affecting more in the North and Northeastern regions,” said Samantha Mortimer, a public health nurse with PHSD. “We know that. During the pandemic there was definitely an effect to do with the COVID-19 decrease in services and isolation but we also know that there are many social and economic determinants of health that contribute to that increase, especially in the Northern region.”

The housing crisis, housing disparities, poverty, different traumas and experiences related to colonialism, different social and physical environments and occupational environments in the North that are different, especially when compared to Southern Ontario, Ms. Mortimer said. “A big thing that definitely contributes is the lower availability of services in our rural and remote regions. That type of isolation can make it hard to reach those that are at higher risk of overdose.”

“PHSD is actively working at beefing up programs and services and doing outreach to be able to close that gap and help lessen the disparities that are experienced by the North,” she said.

Pushing for more services is part of what needs to be done, as is continuing to work with community partners within the district. That includes Manitoulin, Espanola-LaCloche, Sudbury East and Chapleau. “Working with them and our Indigenous communities play a role in this,” Ms. Mortimer added. “Getting advice from our partners and people who are greatly affected by this crisis is huge to us in developing those services.”

Community members can continue to raise awareness and International Overdose Awareness Day (IOAD) (August 31) is a good opportunity to do that. IOAD was created to help raise awareness, decrease stigma and recognize those individuals who died due to overdoses and the grief and loss experienced by their loved ones, their family and their friends.

“We always as an organization really push and encourage people to get Naloxone training, to carry Naloxone and to keep having open and honest discussions about substance use and the harms related to it,” said Ms. Mortimer. “It (discussion) also helps to decrease stigma and increases people accessing services.”

PHSD is continuing its outreach work and “a big part of that is collaborating with partners and having communities and community members reach out to us as well,” she said. Ms. Mortimer and several peers will be on the Island on August 31, providing training to a community for overdose awareness.

The solution to the crisis requires a multifaceted approach. “There’s lots of things that can contribute to a solution but it’s not one quick fix,” Ms. Mortimer said. “It’s going to take immediate, mid-term and long-term strategies to resolve the situation.” 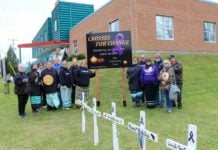 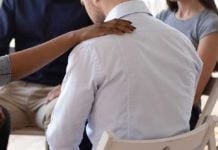