The long awaited Divisional Court Charter Challenge of three industrial wind turbine projects wrapped up on Thursday, November 20. The appeal went before Justices F.N. Marocco, D.M. Brown and J.R. Henderson at the courthouse in London. Arguments were made by Julian Falconer and team, counsel for the four families (Drennan, Dixon, Ryan and Kroeplin) objecting to the proximity of industrial wind turbines to their homes in the 140 turbine K2 (Drennan) and 15 turbine St. Columban (Dixon and Ryan) wind projects currently under construction in Huron County, and the 92 turbine Armow Wind Project being constructed in Bruce County. Counsel for the Ministry of the Environment and the wind developers argued in support of the current legislative regime for the development of wind projects in Ontario. The matter of a stay of construction of the K2 and St. Columban Wind Projects was also heard. The Appeal was well attended each day by an attentive audience of supporters of the four families, press and other interested parties. This Charter challenge appeal was to the constitutionality of certain provisions of the Environmental Protection Act, which was amended by the Green Energy and Economy Act. The Stay action was also spoken to. At the end of the appeal hearing, the learned judges reserved their decision on all matters before the court. The four families are not seeking any type of financial settlement in this action.

It is important to note that on the first day of the appeal intervenor status, in support of the four couples, was requested by the County of Lambton as well as by a community coalition of 14 different groups from across the province.

Serious harm to human health, arising from exposure to industrial wind turbines, was at the heart of this appeal. What became very clear during the appeal was the disturbing data gaps when it comes to a solid understanding of how these turbines impact human health. Proper, scientifically based setbacks for these projects are critical for everyone—people living within the projects, wind developers, governing bodies and, in fact, all residents of our province. The focus of the appeal was, of course, part of a much broader ongoing discussion across the province on the wind turbine front. Other concerns include the economics of wind energy development, animal health, property values, tourism, source water protection, wildlife habitats, migratory routes, loss of longstanding municipal rights and authority, loss of local democracy, loss of prime agricultural land for food production, loss of future development potential within wind developments, a drain on local extractive resources and the loss of trust among family members, friends and neighbours—people who have lived and worked together for years and who now feel deeply divided and betrayed.

SWEAR (Safe Wind Energy for All Residents) is a group which formed in 2011 to support Shawn and Trish Drennan as they embarked on their legal journey to address their concerns about health impacts from wind turbines. Other avenues had been exhausted and, sadly, the legal route became the one remaining option. A considerable record has been created since that time and was brought to bear at Divisional Court. The Dixons, Ryans and Kroeplins, along with their supporters (HALT and HEAT), came under the SWEAR umbrella for this appeal and we will all move forward together. Since its inception, all funds contributed to SWEAR have gone directly to legal costs. All other incidental costs have been and will be borne by SWEAR members.

It is our belief that the Green Energy and Economy Act, 2009, is a particular instance of a piece of provincial legislation gone terribly wrong. Going forward, it is quite possible that a similarly deeply troublesome piece of legislation will be passed pertaining to some other matter and will profoundly impact the day to day lives of other ordinary people in this province. Let’s be thankful that the four families in this situation have had the courage to stand up and fight for governmental accountability. Let’s do all that we can to send a cautionary message to our provincial legislators.

If you share our concerns, please help to fund this important case which is essentially public interest litigation. It is unfair and unreasonable to expect a few to fund something which stands to benefit so many. In all likelihood, further action will be required, regardless of the outcome of this appeal. Cheques can be made payable to “SWEAR” and sent to Dave Hemingway, R.R.#2, Bayfield, ON N0M 1G0. Donors can also go online to the SWEAR website at www.swearontario.wix.com/swearontario, and hit the “donate” button. For further information on this case, go to www.falconers.ca and www.halt-safe.ca.

On behalf of SWEAR 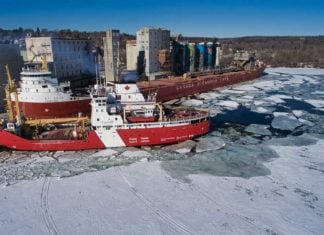 Press Release - January 10, 2022
Sarnia, Ontario – The Canadian Coast Guard advises residents in the areas of Fisher Harbour and Midland that the CCGS Griffon will carry out...