TEHKUMMAH— Manitoulin mushroom farmer Ray Reckahn of Tehkummah fell into the business of raising shitake mushrooms in his grandmother’s cedar bush “by fluke.”

“When I was a kid I used to love to go hunting for morels (a popular type of wild mushroom found on Manitoulin),” he said. “But the last time I went out, I couldn’t find any.”

Morels can be very challenging to find, particularly as too few amateur pickers use the traditional onion bag to store and carry their finds. The onion bag allows the spores of the mushroom to escape and lie dormant for the next time conditions are ideal for them to spring up.

“I decided to see if I could grow them,” said Mr. Reckahn. He eventually found a 72-year-old semi-retired mushroom farmer. “He told me he could sell me the spores and would wish me good luck,” he laughed. It seems raising morels in captivity is more than a little challenging. “He then told me he would sell me shitake spores along with a warranty.”

Shitake mushrooms are almost as popular as morels with the added bonus of being much easier to raise and harvest, not that it doesn’t take a fair bit of effort to raise shitakes.

“The guy I bought the spores from once had 55,000 logs on the go,” said Mr. Reckahn. “It was his job. Now he is 72 he just sells the spores and the thimbles that you put into your logs.”

Mr. Reckahn currently has 500 logs as his production base. “He told me that anything under 2,000 logs is just a hobby,” said Mr. Reckahn. Although he may grow to the 2,000 log level, the Tehkummah mushroom farmer didn’t think he would go beyond that level. 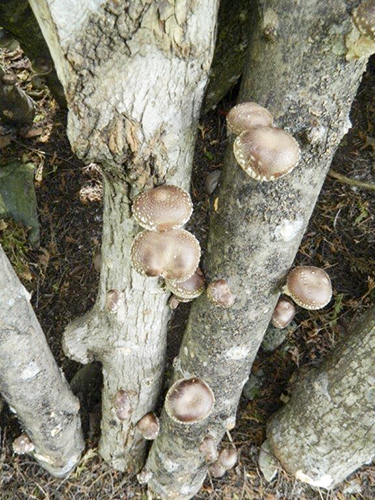 The harvest schedule for the mushrooms is from May to the end of October, said Mr. Reckahn. Although the normal season for mushrooms in the wild is only in the spring and fall, a mushroom farmer has tricks to extend that season throughout the summer months as well. “You can force the log to produce,” he said.

The process involves fully submerging the hardwood logs, preferably red oak but maple will do (anything like poplar would soon deteriorate under the soggy conditions necessary to encourage mushroom growth), for 24 hours. The key element is the heartwood, he noted. Once the logs have been pulled from the water, they need a good pounding. “You take a hammer and hit it a good whack,” he said. “You have to really physically shake the log.”

The logs are then stored under a blue tarp. “They only need about 10 percent light,” he said.

So soak, shock and then put it in the dark.

Forget that old adage of being kept in the dark and only fed plenty of manure, however, because there is no manure involved in this process.

The first year of production is really just getting things into the swing, with inoculation only producing about 40 percent. “You don’t get any mushrooms the first year,” he said. But once production is well established, the haul from each log will net about 15 to 30 mushrooms, or about two pounds, per log every two weeks.

The mushroom farm is a very family affair, with Mr. Reckahn’s wife Tara and his children Jacob and Skylar pitching in to plant, store and harvest the plants. Ms. Reckahn is helping out despite not being too crazy about mushrooms herself, while children are split down the middle on the saprovoric delicacies.

Skylar especially enjoys harvesting the mushrooms. “You pick them by cutting them off with a pair of scissors, snip, snip, snip,” said Mr. Reckahn. The logs will each last for about five or six years in production.

A less popular pastime is slug picking. “Slugs love mushrooms,” said Mr. Reckahn, who said he has tried just about every old wives’ remedy for dealing with the slimy pests. Beer has often been cited as the gardener’s best friend. “You basically set out a bowl with beer and the slugs crawl in and are supposed to drown,” he said. Although slugs do apparently love beer as much or more than mushrooms, there is a catch. “Unfortunately, there just isn’t enough beer,” said Mr. Reckahn. 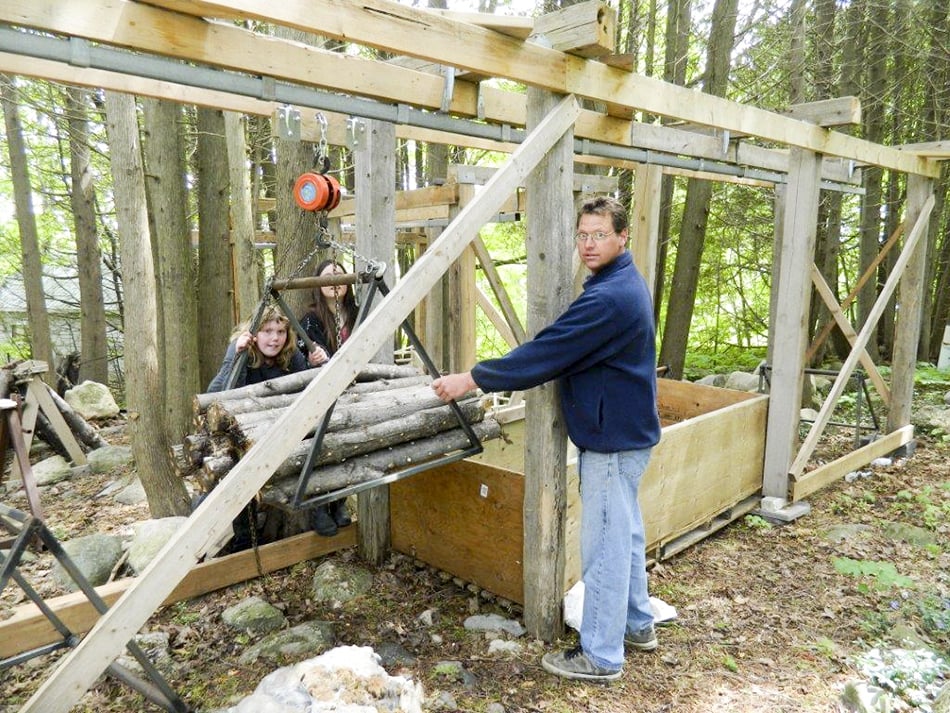 Next up was a barrier of hair around the logs. “The slugs still got through,” said Mr. Reckahn. “I couldn’t find anything short of a pesticide that would work.” But pesticides were out of the question. “I am not organic certified, but I don’t want to use pesticides, I want to stay as organic as possible.”

So the solution that works is going out at night with a flashlight and harvesting the slugs one slippery slimy body at a time.

Mr. Reckahn and his family can only eat so many mushrooms (especially with only two of them actually liking mushrooms), so he sells his surplus to a number of Island outlets. One place to sample his wares is the Island Jar in Little Current, who stock both his fresh and dried product.

“We have a hard time keeping the fresh ones on the shelf, they go so fast,” said The Island Jar’s Natasha Rueter when The Expositor dropped by to have a look. “We do have the dried ones in stock usually though, you can find them in the local produce section. Just look for the little jars.”

Mr. Reckahn is also selling his mushrooms in the Manitoulin General Store and he has just received a large order from Foodland for both his fresh and dried mushrooms.

Is this the path to wealth and fame? “I don’t think I will be quitting the day job,” laughed Mr. Reckahn, who works full-time at the Manitowaning Mill. “But this might get me a vacation trip, or maybe buy ‘dad’ a four-wheeler.”

And what does grandma Pat Hall (The Expositor country correspondent who pens the Tehkummah Talk and Times column) think of all this mushroom production in her cedar bush. “She loves mushrooms,” said Mr. Reckahn. “She has threatened that she wants rent, in mushrooms!”