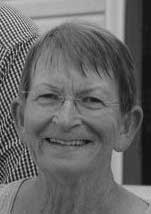 It is with great sadness that the family of Terrill Darby Joan Scott (nee Dennis), better known as Terri Scott, announce her passing on Saturday, August 6, 2016 at the age of 69 years. Terri will be lovingly remembered by her husband of 48 years Tom Scott, daughter Sara (Brian), her Aunt Edna Reid (John), her sisters Jenny (Art), Lorna (Bill), Lauren (Ken), brother Sydney, and her five grandchildren Steven, Cordell, Sherington, Jayla and Cassandra, and many nieces and nephews. Sadly, Terri was predeceased by her parents Tom and Laura Dennis, sister Beverly, brother Bryan, and her loving son Matthew. Born in Sudbury, Ontario, December 8, 1946, Terri moved with her family to Parry Sound where she finished her grade schooling at Parry Sound High. She trained at the General Hospital and proceeded to work as an X-ray technician at St. Joseph’s Hospital. Once marrying Tom Scott on June 15, 1968 she and her husband moved to Little Current on Manitoulin Island, where she continued her career and enjoyed the farm, fishing, and most of all her extended family – the Scott’s. In 1979, Terri, Tom and their two children relocated to Westlock, Alberta where she continued to enjoy hunting, fishing and camping. Terri continued her career as the head of the Imaging Services Department, but due to illness, had to retire earlier than she wished. A Celebration of Life will be held in her memory Saturday, September 3, 2016 at 2 pm at the Dapp Hall located at 2 Railway Ave, Dapp, Alberta. Those who wish to, may make memorial donations to the Edmonton Cross Cancer Institute located at 11560 University Avenue Northwest, Edmonton, AB T6G 1Z2.