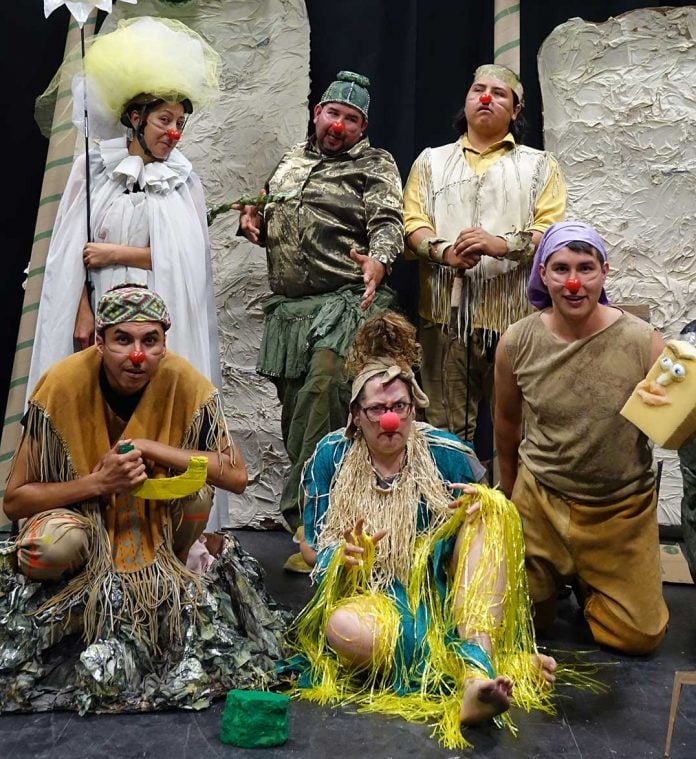 WIIKWEMKOONG – For the past five weeks, six members of the Debajehmujig Storytellers troupe have been immersed in the Manitoulin Conservatory for Creation and Performance (MCCP) (aka the Clown Farm) working up their clown chops for an innovative mainstage production at Wiikwemkoong’s Holy Cross Mission ruins.

‘Ndaa doo waabdaan: The Quest’ centres on six people who find themselves in the midst of a chaotic world, directionless and struggling. “They recognize that they are missing something from their existence and so they set out to find the seven values of the Anishinabe (aka the Seven Grandfather teachings),” explained Debaj artistic director Bruce Naokwegijig.

The clown-based show grew organically out of the six-person team’s work within the Joey and Augute spectrum. Classic comedy duos are made up of a leader and a follower, usually the clever, bossy type who always thinks they know best and the eager, idiotic sidekick, think classic comedy teams such as Abbott and Costello, Laurel and Hardy, Martin and Lewis, George Burns and Gracie Allen, or Ricky and Lucy Ricardo. In this case the classic duo concept of clown interaction comes with a distinctly Native twist. “It definitely has an Indigenous flavour to it,” said Mr. Naokwegijig.

The production is “kid friendly,” he noted. “It started out with a bit of colourful language in the beginning, but that has since toned down as things developed.”

The Seven Grandfather teachings are humility (dbaadendiziwin), bravery (aakwa’ode’ewin), honesty (gwekwaadziwin), wisdom (nbwaakaawin), truth (debwewin), respect (naadendimowin) and love (zaagidwin) and they form the core of the Anishinabe world view, a lexicon of values that line the path to living a good life.

In a world that places far too much emphasis on the acquisition of money it is easy to see how the players’ world is out of balance, becoming an unworkable chaos with each person lacking any sense of direction toward leading a good life. An evening with ‘Ndaa doo waabdaan: The Quest’ might just provide some insight toward finding that path.

‘Ndaa doo waabdaan: The Quest’ will take to the stage at the Holy Cross Mission ruins in Wiikwemkoong on Thursday, August 15 to 18 and 21 to 24. All performances will start at 7 pm and admission is $20 for adults, $15 for youth and elders.