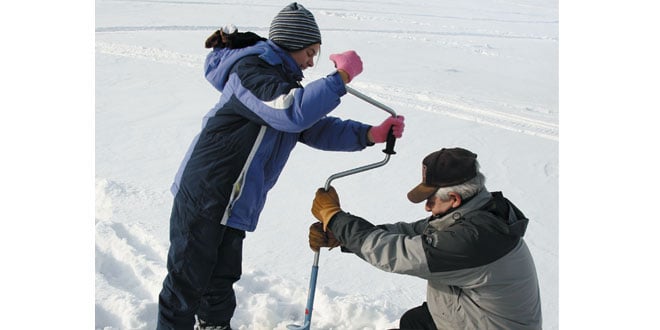 ANN ARBOR, MI—Ice cover on the Great Lakes plays a pivotal role in the amount of water lost each year to evaporation, the key element in water loss on the lakes. Andrew Gronewold, hydrologist and physical scientist with the US National Oceanic and Atmospheric Administration’s Great Lakes Environmental Research Laboratory, is intimately involved in the creation of predictive models (the scientific equivalent of a crystal ball) for Great Lakes water levels and spent some time talking water with The Expositor last week and what he had to say might surprise some people.

“My area of expertise is in the short and long term prediction of water levels and water surface temperatures,” he said. “(And) what the implications are for water levels over the next six to 12 months.”

With a very cool fall period leading up to winter, the amount of ice cover and colder water temperatures we are seeing this winter and the likely cooler temperatures we will be seeing next fall, Dr. Gronewold said that it is probable likely that the Great Lakes will see lower than average declines.

Overall, the seasonal cycle in the Great Lakes remains strong, with peaks and declines

“Water levels on the Great Lakes have really been fairly stable over the last decade or so,” he said. “The real drop in water levels occurred in 1997 and since then the water levels have really not rebounded. They have stayed very, very low for more than 10 years.”

This is not a uniform phenomenon across the Great Lakes, cautioned Dr. Gronewold. “Over the Lake Superior area precipitation and water levels have been low for 10 years, while over Lakes Michigan and Erie they have been above average.”

But precipitation has not seen all that much of a net decline for the time period between now and the year 2000. Variations over the long term tend to even out somewhat, but sometimes a significant drop in water levels, such as that in the late 1990s followed by a long period of drought, can create something of a new normal.

“Water levels do go up and down. In the late 1990s, there was a drastic impact, but water levels in between can climb and drop,” he said. “What is different here is when we look at the long term, over 30 or 50 years. We just reached the record set in 1964.”

The system is immensely complicated, but it is also fairly simple in basic terms as well.

“If it rains quite a bit, that can affect the water levels, if there are high temperatures and there is a lot of evaporation in the fall and early winter, that can impact the levels as well,” he said. “One thing we can be certain about is evaporation.” Under the current situation, with the remarkably low temperatures the region has experienced this winter, water temperatures may “stay a little colder for a little longer.”

Nobody can predict with certainty how much precipitation will fall over the next few years, but with colder temperatures, an early and nearly complete ice cover and evaporation being slowed this year, coupled with the current low temperatures in the lake water impacting temperatures well into the future (it takes a long time to warm that much water up) the short term prognosis for water levels is looking better with each drop in the mercury level.

The amount of data and information on water levels is growing with each and every year allowing better (and more complex) prediction models for scientists to check against real world results. Dr. Gronewold was particularly excited to share a new online chart where the public can surf in and check the historical and predictive models against what has actually taken place.

One thing that is very exciting for Dr. Gronewold and his compatriots in the scientific world about the current weather and water levels is that the general public is starting to take notice of what is going on.