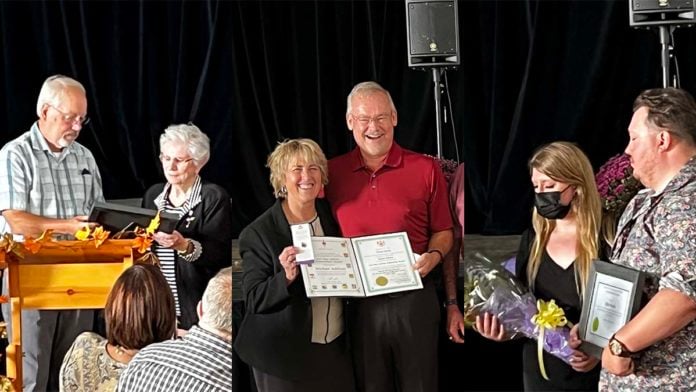 ﻿GORE BAY—Each year, Gore Bay recognizes volunteer awards and senior of the year, but in 2015, they began to award those people who had made a lifelong contribution to the town. From 2015 to 2018, 11 Gore Bay residents were recognized. Unfortunately, there weren’t any over the past two years because of COVID. This year brings a new normal and with that, the return of Gore Bay’s Lifetime Achievement Awards. 2022 recipients include Marie Clarke, Mike Steele and Michael Addison.

“It’s difficult to pick this award,” said emcee and former mayor Ron Lane at the awards ceremony this past Saturday. “There are 132 years of history of our town and there’s a lot of people in the community that are volunteering.”

Listening to the long lists of achievements of this year’s recipients, including the more general ‘they would do anything for anyone that needed help,’ helps one realize that volunteers are indeed the backbone and strength of small communities such as Gore Bay. They do “make Gore Bay a better place year over year, and I hope that will continue,” Mr. Lane said as he introduced the recipients.

Mr. Lane’s family moved from Barrie Island to Gore Bay in 1960, to a property beside the Clarkes. They’ve been friends and neighbours ever since. “It’s a real pleasure for me to be able to present this award to Marie,” he said.

Ms. Clarke has earned the honour for a lifetime of volunteering, of caring for other people not only in the community of Gore Bay but beyond, said Mr. Lane. Marie was born on a farm in Gordon Township. Being the oldest of six children, she got to helping very early, on the farm and with the children. As a young woman she worked in Gore Bay dealing with the public in the restaurant, the drug store, the hardware store, and the grocery store. She met the love of her life, settled down and started a family. Since then, she has worked at the nursing home, caring for people who could no longer care for themselves. She worked with the volunteer ambulance, in administration and as an attendant. “Long before we had the ambulance service we have now, we actually had a volunteer ambulance,” Mr. Lane said.

“Marie was involved for years, and probably still is, with the United Church, the United Church Women, with the curling club, all working for the community,” Mr. Lane said. “She also for years canvassed for the Cancer Society and the March of Dimes, and anytime somebody needed help, she would help them. I know that for a fact, I have personal experience with that. It’s hard to explain what a person does for 70 years of her life. That’s just a snapshot.”

The second award went to Mike Steele and was accepted by his daughter Stephanie and son Connor. Mr. Steele passed away suddenly in 2021. He was born and raised on Manitoulin, but like many Islanders he left to go to school and then drifted over to Toronto. That didn’t last long because his heart belonged to Manitoulin. He returned home and got involved in the family business (the hardware store).

“Mike worked hard to grow the business,” Mr. Lane said. “He would be very flexible with payment because people need things. He was always prepared to give credit if necessary so people could get the things they needed.”

Mr. Steele often donated prizes or cash donations to community events, carnivals and hockey tournaments and other occasions. He was involved with the volunteer fire department for many years, many of those years as fire chief. “He was involved when Gore Bay amalgamated with Gordon/Barrie Island to form one volunteer fire department,” Mr. Lane said. “He was always there when somebody needed help. He was the first one to start our fireworks display on July 1.”

Mr. Steele enjoyed visiting. He enjoyed music. He enjoyed travelling on his motorcycle and meeting people but most of all Michael enjoyed his family, Mr. Lane added. “He was very proud of his family.” “In recognition of all the things Mike did to make the town a better place, the Town of Gore Bay has honoured him with this lifetime achievement award.”

Gore Bay Councillor Ken Blodgett presented the final award to Michael Addison. “Without service we would see a much lesser community,” Mr. Blodgett said. “Mike joined the fire department in 1995 and served as a firefighter until 2014. He then became the chief.”

Mr. Addison initiated the values of professionalism into the Gore Bay Gordon Barrie Island Fire Department and the development of an honour guard can be directly attributed to Mike, Mr. Blodgett said.” His contribution as fire chief makes him most deserving of this award but there is so much more that Mike has done for the community. He headed the Island charter of North Shore Search and Rescue for years. He was a charter member of the Lions Club of Gore Bay for 22 years and a member of the building committee for the Gore Bay Medical Centre. He is an active member of the United Church and he is an active member of minor hockey and was a trainer and assistant coach for years. Mike, I don’t want to say you’re old, but you do exemplify the spirit of the town’s forefathers.”

Mr. Addison then shared his own stories about Ms. Clarke and Mr. Steele and offered a few words of wisdom. “Everything I was involved in, whether it be fire department, search and rescue, Lions Club or just organizing volunteers, it required a team effort,” he said. “I’m fortunate I’ve always been part of a team that was very supportive and worked very well together. The secret to getting things done is having a great team with everyone working together on a common goal. Whenever I’d call up looking for volunteers, people were very supportive and were very quick to say ‘yes.’ People of my generation are getting older. We’re getting tired and it’s time to bring on the next generation of volunteers to take our place. We need to be encouraging, supportive and accepting of those who follow behind us, just as our parents and grandparents’ generation were supportive in encouraging us. The future of our community is in the hands of the next generation of volunteers. Let’s welcome them, encourage them and accept them.”

“We were fortunate to have people like you and your staff and crew to look after us when they did,” Mr. Lane said before thanking Gore Bay council for selecting the three recipients and noting the importance to the community of recognizing the people who have done so much to make it a great place.

Recipients received flowers, a framed certificate and a glass award from the town. MP Carol Hughes attended the ceremony and presented additional certificates of appreciation and congratulations on behalf of herself and MPP Michael Mantha. “We can’t thank our volunteers enough,” she said. “You know we respect the work you have done.”