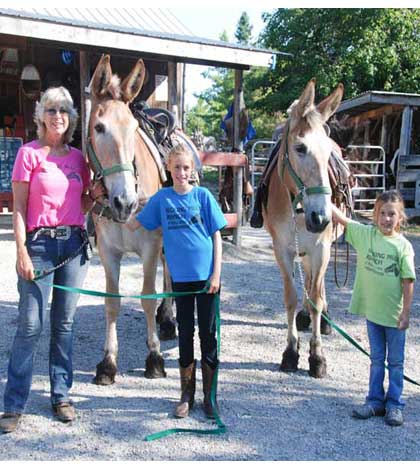 TEHKUMMAH—When Willie Pegelo’s twin boys, John and Ben Graham, turned nine 26 years ago they were each gifted with their own foal mule, Mildred and Merle, paternal sisters. Mildred and Merle were an instant part of the family and the boys lovingly reared the foals, learning the importance of animal husbandry along the way.

As the twins grew older, they became interested in the Manitoulin Light Horse Club and its activities and were forced to make a decision—keep Mildred and Merle or sell the sisters. After much thought, at age 15 John and Ben made the decision to sell the mules which went to a horse dealer in southern Ontario. The family had heard that they were sold to a farm near North Bay, but other than that the mules became a distant, and fond, memory—that is until recently.

Willie Pegelo, proprietor of Kicking Mule Ranch in Tehkummah, explained that some Islanders might remember Mildred and Merle in the late 1980s. After moving to the Big Lake area of Manitoulin, the family made the decision to live off the land and this meant going without a car. Whenever there was laundry to do or groceries to buy, Mildred and Merle were hitched to the wagon and off they went to Mindemoya, attracting a lot of attention wherever they went.

Mildred and Merle are a product of the thoroughbred industry. Belgian mares (like their mother) are bred with a donkey and shortly after the mule foals are born they are taken from their mothers and sold for a relatively cheap price on the horse market. The mothers are then used as a ‘wet nurse’ for thoroughbred foals.

“The boys were home schooled at the time and Mildred and Merle really helped to raise them,” Ms. Pegelo said. “Everything they learned about horsemanship came from them.”

Ms. Reid and her husband Cecil were the proud owners of Mildred and Merle for the past 22 years, having purchased the sisters from the southern Ontario horse dealer.

Ms. Reid said that 22 years ago, she and her husband had read an ad in the local paper that offered two teams of mules for sale.

“We bought them and brought them back here,” Ms. Reid told The Expositor. “We rode them a couple of times, but they’re part Belgian, big, and it’s kind of like riding a gas truck.”

Just like John and Ben’s decision to sell the mules all those years ago, the Reids’ decision was a tough one to make too, as they were very much a part of the family, and a part of the Powassan neighbourhood, where they were affectionately known as ‘the girls.’ “People have been asking me, ‘you mean the girls are gone’?” Ms. Reid said.

In their 70s and with her husband living with a bad back, Ms. Reid made the decision to track down Ms. Pegelo, whom she discovered was the original owner of the mules, to see if she would consider taking them on again.

“I called her back and she tells me she has Mildred and Merle—it just blew me away,” Ms. Pegelo said. “I didn’t even hesitate, I just said ‘yes’.”

One week later, the mules arrived to the Kicking Mule Ranch, complete with their Mennonite crafted bridles and handmade cart and Ms. Reid to see them off. John and Ben and their children were the welcoming party.

“Do you think they recognized them?” this reporter asked of the reunion.

“That’s what everybody wants to know,” Ms. Pegelo laughed. “They were so trusting of them when they were being bridled, I think that must have known.”

The sisters are joined at the hip, having known no other life. Even now, with a stable full of horses and mules to visit with, Merle and Mildred stick to each other.

When convincing the mules out of their stable for a photo, Merle was led out first. Worried about where her sister was she didn’t want to cooperate at first, but reassured that Mildred was close behind, she settled and allowed for a photo to be taken with the next generation of Grahams.

“Mules live to be 50,” Ms. Pegelo explained. “They are always so healthy and very smart. Calling them stubborn is a discredit—their actions are done with intelligence. You have to be one step ahead of them at all times.”

She explained one trick she uses for escaped mules. Should a mule break free and head for the paddock, rather than try to round it up Ms. Pegelo will make a show of feeding all the other animals. Always sporting a healthy appetite, the mule will make its way back on its own accord, rather than be left out of a good scoff at the trough.

Mildred and Merle are adapting to life on the ranch, going out with the odd trail ride but usually bringing up the rear (mules like to set their own pace). This winter, they will spend the season at John’s home in Tehkummah with another mule and some more horses. The family is hoping they will break their shyness and make new friends during those months but regardless, Merle and Mildred are back to stay.

“I think it’s a happy ending animal story, I just wish more of them ended that way,” Ms. Reid commented from her Powassan home. 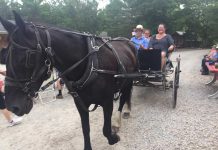