Focus will be on walleye, if successful, Chinook salmon, rainbow trout may follow

MINDEMOYA—Lake Mindemoya was once legendary for its productive pickerel (walleye) sports fishery, but recent inventory studies are painting a dismal portrait for the lake’s bronze flanked fisherman’s treasures unless proactive action is soon undertaken.

The United Fish and Games Clubs of Manitoulin (UFGCM), a non-profit group of dedicated volunteers are proposing the creation of a lakeside fish hatchery in the underutilized gazebo at the Government Docks whose first mission would be to raise pickerel fingerlings to a size that could survive the recent environmental challenges that their research has indicated lie behind the local population’s precipitous decline.

UFGCM members Al Holroyd and Paul Whelan delivered an indepth presentation on the proposed fish hatchery before a public meeting in the Central Manitoulin council chambers in Mindemoya. The UFGCM are hoping to garner broad public support, as well as the support of council, before they approach the Ministry of Natural Resources with the project.

“Without the support of the MNR (Ministry of Natural Resources and Forestry) we are dead in the water,” said UFGCM President Jim Sloss following the meeting. A sentiment repeated liberally throughout the group’s presentation at the public meeting. 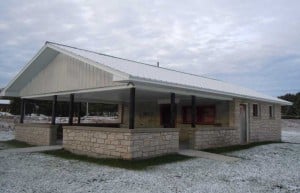 Mr. Sloss explained that the MNRF’s blessing would be required to access the pickerel eggs that would be raised in the proposed hatchery.

Judging from the response at the packed council chamber meeting, from both the general public and council members in attendance, the project has broad bedrock support heading into the February 24 meeting with MNRF.

Although there were concerns expressed about traffic, noise and the use of the popular docks and beach, where summer swimming lessons are held, the answers provided by the proponents appeared to lay those concerns firmly to rest. “There will be very little traffic at the site,” noted Mr. Holroyd. Aside from a few days when the hatchery is primed with eggs and the odd check-in by a volunteer, the building will have little more impact on the nearby residents than is now the case.

The facility will contain four 500-gallon tanks (with a possibility of five) and will be a self-contained operation requiring very little make-up water and producing little if any noise from its generator.

Many of those in attendance at the meeting supplied anecdotal references to their fishing experiences in the past, but as exemplified by Central Manitoulin Councillor Derek Stephens’ comments, “I used to fish on Lake Mindemoya, but we don’t bother anymore. We go to other lakes, when you go out you like to catch fish.” Other attendees reinforced the suggestion that the lake’s pickerel fishery has fallen on hard times. 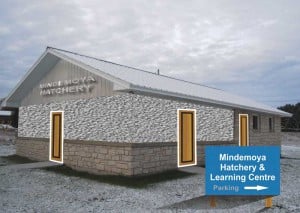 Not all of the fishing on Lake Mindemoya is dismal, noted the presenters; the perch and rainbow trout take is strong, if not stronger, than ever. In fact, the figures from fish surveys show the perch populations as being stronger than ever, with yellow perch and rainbow smelt numbers burgeoning through the years between 2001 and 2013, even as pickerel numbers plummet. The latest figures show the smallest cohort has all but disappeared from the lake and the loss of those smaller fry will reverberate up through the coming years.

The culprits in the decline of the pickerel population fingered by the UFGCM are the invasive species that have been introduced to the lake, and to some extent, the impact of global warming.

“Zebra mussels compete for the same food source as the pickerel fry,” noted Mr. Holroyd. Explaining that the zebra mussels are very efficient filters that take out the tiny plankton that the fry depend upon to grow through their smallest stage after hatching.

Cormorant predation is an issue, but that is one the hatchery proponents have a plan to deal with. “Instead of planting 10,000 fingerlings, we maybe plant 12,000,” said Mr. Whelan, who noted that bird numbers seem to have plateaued in recent years.

One attendee raised the issue of netting on the lake, but the presenters were adamant that the decline in population was not attributable to netting. “Nobody nets on Lake Mindemoya these days,” said Mr. Holroyd. He noted that educational programs by Lakeview School Principal Neil Debassge, an avid conservationist and sportsfisherman himself, are building a solid understanding of the importance of respecting the needs of future generations and the value of conservation in preserving traditional food sources.

In any event, the slide presentation provided clear evidence of where the issue actually lies. The earliest cohorts of pickerel in the lake are all but non-existent now, while the larger-sized generations of the fish are still quite healthy.

The hatchery design will utilize a recycling system, with minimal discharge to the environment, using well water and a series of filtration and ultraviolet treatment to keep its four 500-gallon tanks at an optimal environment for the growing fingerlings. From there, the small fry may be kept in nursery nets or moved to a rearing pond until they are of a large enough size to leapfrog the endangered portion of their food supply. 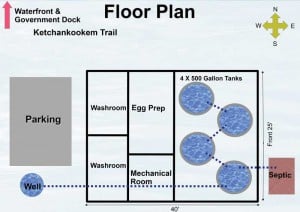 The hoped-for date the hatchery would start producing fingerlings for planting in Lake Mindemoya would be 2016. In 2015, the proponents hope to secure a long-term egg supply from the MNRF, establish the design and costs, initiate a fundraising campaign (with a ballpark estimate of $30,000 as a goal), and a finally retrofit of the building for hatchery components to begin production in 2016.

“Council is sympathetic to your project,” said Mayor Richard Stephens following the presentation.

In a question from Gloria Haner, Mayor Stephens confirmed that the municipality would maintain ownership of the building and surrounding property, to which Ms. Haner responded, “It looks like it would be a good project.”

A question about the issue of a fish virus currently of concern in the North Channel being introduced into the lake was fielded with a note that the eggs would be secured from Lake Mindemoya itself (or another in-land lake free of the virus).

If the hatchery proves successful in the pickerel department, the goal would be to look at perhaps utilizing the other seasons to bolster other fish populations such as salmon and rainbow trout, which would be raised at different times than the pickerel.