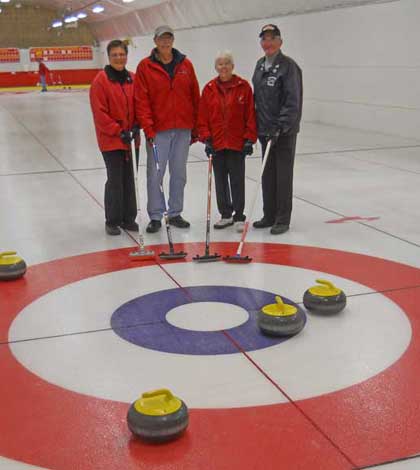 PROVIDENCE BAY—In what can only be described as an auspicious beginning for the Providence Bay Curling Club last Wednesday, the first game of the curling season, a team managed a curling rarity—an eight-ender.

Interestingly, this is not the first eight-ender of the Providence Bay Curling Club, as a team managed this feat in 2008 too.

According to the Canadian Curling Association website, “an eight-ender is an end where all eight stones score for one team—a very rare occurrence.”

The Expositor was contacted by curling club president Ellen Holroyd about this great achievement. Ms. Holroyd explained that she is new to Manitoulin, having moved here with her husband three years ago, but is no stranger to curling. She’s been hitting the sheets for 44 years, beginning as a high school curler.

The October 23 game was only the second time in Ms. Holroyd’s career that she has seen an eight-ender.

“It is like a hole-in-one for golf except curling is a team sport,” she explained.

In this case, the players were Donna and Paul Whelan, Donna Kay and veteran skip Harold Arnold.

“And for Paul and Donna, this is only their second year curling,” Ms. Holroyd said. “It’s a good way to start the season.”

The president explained that the two skips were at the other end of the ice when it became apparent that an eight-ender was near, completely oblivious to what was before them. Ms. Holroyd was on the opposite sheet of ice and saw what was about to happen, she explained, and couldn’t wait to see the outcome.

Harold Dewar, a long-time supporter and curler at the Providence Bay club, explained that he missed the event, but couldn’t be more pleased.

“It’s a wonderful thing,” he said.

“I was involved in a seven-ender once, and you’d think that would mean I would win the game but it doesn’t, I lost 11 to 9,” he laughed.

Mr. Dewar said he really isn’t surprised about the eight-ender, noting that skip Harold Arnold is an accomplished athlete, a former hockey and baseball player of note. He mentioned Prov’s storied curling names, too, noting the Chandler boys, Jordan and Kyle, not to mention his wife Shirley, who took a team to the senior nationals in 1998. “The Prov rink has been well represented,” he added.

“Harold is the most deserving of this that I know of,” Mr. Dewar continued.

The Providence Bay Curling Club is a going concern, Mr. Dewar boasted. And it must be, as not many rural curling rinks can boast ice in mid-October.

The Expositor contacted the modest skip and when asked if he felt the need to bring forth another eight-ender (the second of his long curling career) by season’s end, Mr. Arnold chuckled, “We’ll just see how it goes,” adding that the team was pretty thrilled to have had such luck.

Curlers hoping to have a little of Providence Bay’s luck are encouraged to come to the club each Monday and Wednesday, as well as to the cash bonspiel November 8 and 10. The cost per team is $160 and spots are still available. 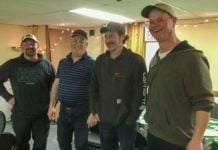 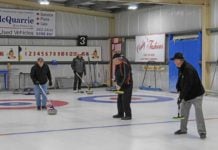 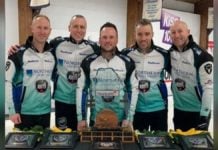