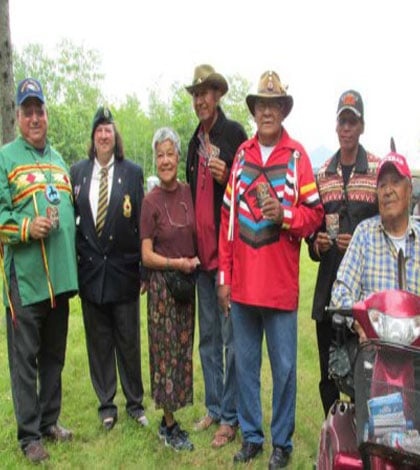 SHESHEGWANING—As part of the annual Sheshegwaning powwow held over two days this past weekend, a special presentation was made to the community and Island aboriginal veterans.

Maggie King, commanding officer of the Manitoulin Sea Cadets, told the large gathering on hand for the grand entry of the powwow on Saturday, “in 2010 I put a motion forward on the floor of the Royal Canadian Legion to honour all First Nation veterans with a special pin, honouring all aboriginal veterans including Metis, Inuit and First Nations persons.”

“Then, in January, I was informed (by the Royal Canadian Legion Dominion Command) that the pin had been struck,” said Ms. King. “It is my distinct honour and pleasure to present these pins to all our veterans here today. I would like to visit all First Nation communities on the Island to honour each and every veteran.”

Ms. King presented the special veterans pins to Sheshegwaning Chief Joe Endanawas, Victor Migwans, Angus Pontiac, Blair Sampson, Bill Antoine, and Marty Hanrohan-Endanawas. “It’s for these and the other veterans who fought that we are here today,” she said.

“This is quite an honour and I would like to thank Maggie for doing this and making this presentation today,” said Chief Endanawas.

At the grand entry ceremony at the opening of the powwow, the posting of the flags took place which included among others Shesheganing Chief Joe Endanawas, UCCM Police Victor Pitawanakwat, Jacob Dayfox, M’Chigeeng, Bill Antoine on behalf of Zhiibaahaasing, the Canadian Flag posted by Blair Sampson, Ernest Wabegijig, Isadore Pangowish of Wikwemikong, Victor Migwans posting the U.S. flag, and the P.O.W. M.I.A. flag posted by Angus Pontiac.

“Good afternoon, I would like to welcome everyone to Sheshegwaning,” said Chief Endanawas. “It’s going to be a nice day according to the Weather Network at 6 am this morning! We’re going to have a good time here in this community this weekend.”