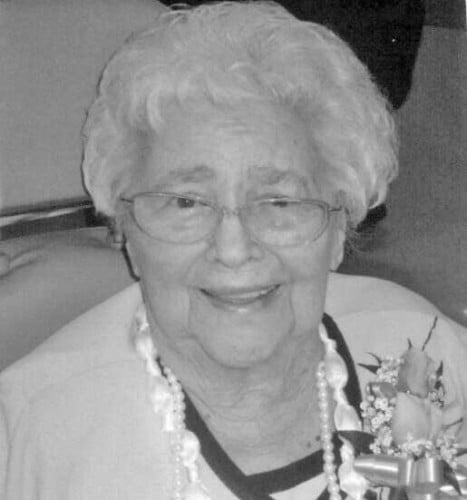 Viola (Dolly) Arnold, 101, of Windsor, Ontario, died peacefully on September 10, 2012, at The Huron Lodge in Windsor. Born January 22, 1911, in Font Hill, Ontario, she is predeceased by her parents, Samuel and Grace Annie Mae (Kettlewell) Saylor and her late husband, Lloyd A. Arnold of Windsor, Ontario. Viola (also known as Dolly by her family and friends) was a homemaker and legal secretary living in Windsor, Ontario. She also was a church organist until she was 80. She enjoyed living on the Manitoulin Island every summer until a few years before her passing. Survivors include her daughter, Lois Ione Long of Gore Bay, and her son, Murray (Janice) Arnold of Columbia, MD and Mindemoya, and grandsons Bryan Arnold of Frederick, MD and Adam Arnold of Ellicott City, MD and granddaughter Stephanie of Columbia, MD, and great-grandchildren, Jack and Madelyn Arnold. Also surviving is her sister, Verlyn Smith, Windsor, Ontario. She is also survived by her dear friend, John Spears. She is also survived by other family members including Gerald (Bobbi) Arnold of Saucier, Mississippi, Harold (Margaret) Arnold of Providence Bay, Ted (Marie) Arnold of Toronto and Kagawong, Lenora (Garfield) Dunlop of Sudbury, and John (Sharon) MacDonald of Tobacco Lake. The funeral service was held at 11 am on Friday, September 14, 2012 with John Abbey Sr. officiating and Henry Plancke assisting. Burial at Greenlawn Memorial Gardens and reception followed at the Community of Christ Church, 5050 Howard Avenue, South of Highway 3, Windsor, Ontario. Dolly was a resident of the Huron Lodge where the staff cared for her in a thoughtful and loving manner. In lieu of flowers, memorials may be made to the Resident’s Life Enhancement Fund of Huron Lodge of Windsor, Ontario and may be arranged through the funeral home (519-252-5711). Online condolences may be left at www.walterdkellyfuneralhome.com.

Expositor Staff - May 7, 2021
M’CHIGEENG - For the first time in its history, UCCM Anishnaabe Police Service (APS) will have a father-son team on board. “It is with pleasure...