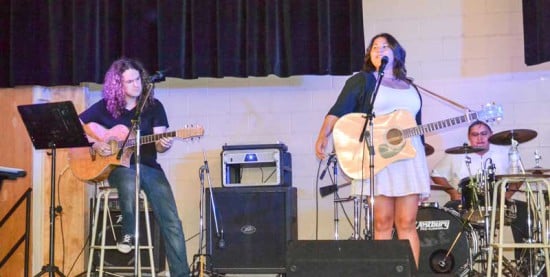 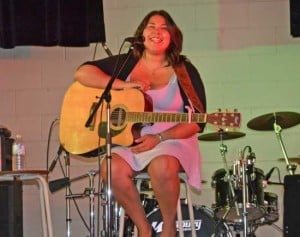 Throughout the last semester, students in the business music program have been learning how to compose and write music, record, advertise and market themselves as artists.

“The students have been working on writing and composing original songs, which some of them will be performing tonight,” explained Jason Thibault, who teaches the class with Pat Peltier. “Next week the students will be travelling to Toronto where they will have the opportunity to record their original songs in a professional recording studio at Coalition Music.”

The first student performer of the evening was Moirah Shawana, with whom The Expositor spoke with before she took to the stage.

“I’m a little nervous,” revealed Moirah, a Grade 12 student in the program. “The song I will be singing is called ‘The Truth.’ I originally wrote it as a poem about a year ago, inspired by a movie about a couple whose love goes awry, but through the course developed it into a song.”

Moirah told The Expositor that she has always loved music, so when the course was offered this year she was excited.

“It’s been really fun,” said Moirah. “It opened me up to a lot of new experiences as an artist. My favourite part of the program so far has been working with Sean Kelly (guitarist with Nelly Furtado and formally of the band Helix), who I will be performing with tonight. I am also really looking forward to the recording studio next week.”

The Expositor spoke with Anthony George too, another Grade 12 business music program student, who was a part of the evening, but working with Coalition Music staff behind the scenes to help with the technological aspects of the show.

“It (the course) has been great,” said Anthony. “I’ve written five songs so far as part of the course, but I’m not sure which one I will be recording next week. My pieces are mostly instrumental and metal in genre, but sometimes I work with vocalists.”

Grade 10 student Storm Shawana was helping run the door for Rezfest, greeting guests and selling t-shirts to help raise money for the class trip to Toronto.

“I play guitar, but I’m really shy,” said Storm, explaining why she wasn’t performing. “I have written a song, but I’m not sure if I will record it, I’m more of a writer.”

Storm said that she got her start as a writer three years ago, inspired by her dad’s love of music, but that the course has really encouraged her to “step out of her comfort zone.”

“This program is fantastic,” Wikwemikong Board of Education Education Director Dominic Beaudry commented. “It is innovative programing, partnering up with Coalition Music and combining practical business knowledge with a creative music element. It’s programming like this that is going to keep students engaged and in school.”

The music business program was developed by Coalition Music, a management company from Toronto, with famous clients such as Simple Plan and Our Lady Peace that over the last three years has launched both in-house and school educational programs for artist development.

Though the music business program has been successfully launched in Toronto schools, Wasse-Abin High School is both the first school to offer the program outside of the Greater Toronto Area and the first aboriginal school.

“The program here has been made possible thanks to Rogers Media,” explained Eric Lawrence, Coalition Music founder. “We have been thrilled to work with Wasse-Abin and the great students here. This is our third time coming up to Wikwemikong and we look forward to their visit with us next week.”

The Expositor also spoke with Sean Kelly, who expressed that he had felt “honoured” to have worked with and been a part of the student’s development and performances.

The Wasse-Abin High School business music program students will be travelling to Toronto later this week, heading into Coalition Music’s recording studio and taking part in a series of development workshops. 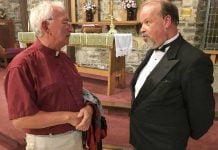 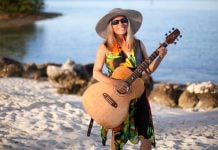