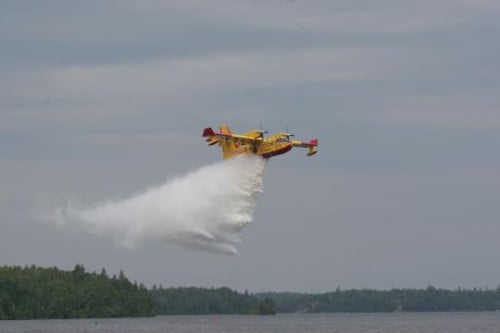 WIKWEMIKONG—In what has already been deemed a dry spring, at press time Monday, two forest fires were currently underway in the Wikwemikong area with Ministry of Natural Resources and Forestry (MNRF) fire bombers responding that afternoon.

Wikwemikong Board of Education Director Dominic Beaudry contacted The Expositor Monday evening with reports of fire bombers flying what he estimated at no more than 20 feet above the Wikwemikong High School.

According to the MNRF fire map, two fires are registered in Wikwemikong—one located along the Rabbit Island Road (that would have been the blaze Mr. Beaudry observed fire bombers attacking) and the other along Wikwemikong Way, between Buzwah and the village of Wikwemikong.

The MNRF’s fire map that day also showed a blaze close to the town of Killarney and another one on an island in McGregor Bay.

Manitoulin Island is currently listed as having a moderate forest fire danger rating.

The forest fire hazard rating is mostly moderate with the exception of the Greater Sudbury to French River, Elliot Lake and Espanola area, which are showing high hazards.

“Think wildfires are just a problem in the summer? Think again,” the update warns. “Spring is grass fire season and grass fires can be a deadly and destructive menace. Seek alternatives to spring burning by considering composting or using your local landfill. Don’t be the reason behind a spring wildfire this year.”