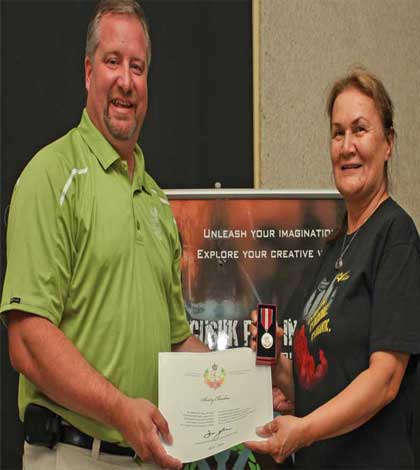 The Queen Elizabeth II Diamond Jubilee Medal, created to mark the 60th anniversary of Queen Elizabeth accession to the throne, is presented to individuals who dedicate themselves to their peers, their community and to Canada.

“You need to know how much you have given to so many in this area,” said Mr. Mantha in presenting the award to Dr. Cheechoo. “Your teaching doesn’t stop when the classes end. You will never know how many lives you have affected—you have touched many lives. You have touched mine.”

Dr. Cheechoo founded Weengushk Film Institute after filming her feature film ‘Bearwalker’ on Manitoulin Island. During production, Dr. Cheechoo was amazed at how many local youth were interested to get involved in filmmaking. This observation was the spark behind the concept of Weengushk Film Institute, and the inspiration for Weengushk’s mission of igniting emerging filmmakers to tell their stories and participate in community initiatives through arts-education.

Dr. Shirley Cheechoo was born in Eastmain, Quebec in 1952. She is a member of the Cree Tribe and her early childhood was spent in Moose Factory along the James Bay coast. She also experienced part of her young life in various Indian Residential schools until her family later moved to Hearst. She is married to artist Blake Debassige and they have one child, Nanoshkasheeese.

Memories of growing up within a warm family group have become the focal point for her expression through the medium of acrylic. She recalls her childhood days where she and her brother would create and perform plays to entertain the local community. Her paintings represent the personal documentation of the many experiences she shared with her large family in the north as well as those of other Cree families lived by trapping and fishing. She provided the illustrations for Basil H. Johnston’s book ‘Tales the Elders Told.’

Dr. Cheechoo gathered like-minded artists and founded De-ba-jeh-mu-jig Theatre Company in 1984. This touring company has become one of the foremost and respected independent Native theatre companies in the world, and is located on Manitoulin Island. She first gained national attention in the theatre in 1992 with her play, ‘Path With No Moccasins.’

She began directing films in 1998 after working as a playwright and director of notable plays.

Realizing she can ease a pain or raise an issue with her film work, she threw herself headlong in to the medium. She enrolled in writing classes, directors lab, acting workshops and film schools As one of a select group of promising film makers, Dr. Cheechoo was invited to attend the prestigious Sundance Institute lead by Robert Redford, where she worked and filmed scenes of her script, ‘Backroads.’ She became the first First Nation person to write, produce, direct and act in a dramatic, feature length film from Canada. She has also appeared in several Canadian film and television series and programs including ‘The Rez.’

Her film directorial debut is the acclaimed short film ‘Silent Tears,’ which won several film festival awards for Best Sort Film. It was screened at the 1998 Sundance Film Festival and was also awarded the Telefilm Canada and Northern Canada Award for Best Canadian Aboriginal Language Program.

Her many achievements have earned her numerous prizes over her career, including the National Aboriginal Achievement Awards, CTV Fellowship Award and the Eagle Spirit Award. Her films have been selected for screening at the prestigious Sundance Film Festival, Reel World, Imaginative, Montreal International Film, Vancouver Film Festival etc. She has won first prize awards for various works at film festivals including Montreal’s First Peoples Festival, Santa Fe Film Festival, American Indian Film Festival of San Francisco and others. In 2002 Dr. Cheechoo was named Independent Film maker of the Year at the Arizona International Film Festival. Her most recent award is the Best Public Service for her project, ‘Sweet Blood.’

Weengushk is the Ojibwe word for Sweetgrass—an Indigenous purification medicine that is burned in ceremonies for healing. Sweetgrass enhances creativity, opens doors, and welcomes helpful energies to sustain a meaningful journey. Weengushk Film Institute embraces this purification ritual as a symbol for clearing the path to professional sustainability and cultural advancement for communities with limited resources in Canada and abroad. The mission of Weengushk Film Institute is to create independent and award winning alumni who are trailblazers in the media industry.