AUNDECK OMNI KANING—This year’s Weengushk International Film Festival (WIFF) focussed on showcasing the stories and voices of Indigenous women, including those who identify as LGBTQ2s+, screening 40 films from across Turtle Island and brought together storied industry veterans with new and emerging independent filmmakers and “everyone in between.”

“WIFF prioritizes people whose stories are under-told, if ever told,” said WIFF founder Dr. Shirley Cheechoo. “It sets out to eradicate injustices in Canadian society while simultaneously transforming the film industry to one of inclusion.”

WIFF endeavours to accomplish these ends by “remaining committed tour philosophy to present the highest quality films that emphasize Indigenous voices with human rights, social and political issue, and the environment,” said Dr. Cheechoo, “while providing entertainment and an escape through film for everyone.”

Film and television veteran Phyllis Ellis was the opening night host and Women in Film panel facilitator. The critically acclaimed actor, director, producer and writer fulfilled her duties with skill and humour.

Following a screening of ‘This Changes Everything,’ a film that shed a bright light on the Hollywood men’s club that locked women (who dominated in the pre-talkie era) essentially out of the film industry for a century and the strides that have been made in the past couple of years.

The Women in Film Panel included the redoubtable Alanis Obomsawin, a nearly 90-year-old internationally acclaimed director, singer, artist and activist. Ms. Obomsawin truly demonstrated the immense power she retains in her voice a couple of days later at the awards ceremony—literally shaking the rafters of the Four Directions Complex in Aundeck Omni Kaning, where WIFF was largely hosted over the next three days (other venues included the AOK band office hall and Weengushk Film Institute in M’Chigeeng).

Director and producer Denise Bolduc, actress and ReelWorld Film Festival founder Tonya Williams (yes, that Young and the Restless star), and filmmaker (and jury member) Sara Jade Alfaro-Dehghani also joined the panel. The women spoke of the challenges they faced (and still face) in forwarding their careers as they shattered the film industry’s glass ceiling.

With some 50 films under her belt (soon to be 60), Ms. Obomsawin was held in well-deserved awe by those attending the festival. Ms. Obomsawin last visited Manitoulin in the early 1960s, when she attended the very first Wiikwemkoong powwow. In a career that has spanned a greater breadth than the lives of most of those attending the festival, despite her fame, Ms. Obomsawin regaled those around her with a host of stories from her long career (along with a slightly risqué joke). The veteran filmmaker was presented with the 2022 Cultural Enrichment Award.

Entertainers for the opening night included singer-songwriter Lacey Hill, Juno Award nominee Vern Cheechoo and Rastak, the cultural exchange group from Iran whose work fuses the folk music traditions of over 30 regions of Iran into a contemporary powerhouse.

Rastak also performed for the awards gala on Sunday and took part in several of the workshops offered throughout the festival.

Rastak brought with them a huge collection of traditional Iranian folk music instruments and both their opening night and closing night performances brought the audiences to their feet.

Glen Gould was the awards night host, noting in his introduction that his start in acting came at Debajehmujig Storytellers (also founded by Dr. Cheechoo), but he is probably most familiar to audiences as Detective Jerry Commanda from CTV’s award-winning series ‘Cardinal’ (not to mention as Gordon Thundercloud on APTN’s ‘Tribal’ and a host of feature film roles).

Assembly of First Nation Grand Council Chief RoseAnne Archibald received one of the two Humanitarian Awards, fresh from her victory over the executive committee of the AFN (which had attempted to sideline her after her challenge of corruption in the organization). The other Humanitarian Award was presented to Tonya Williams, probably best known to the general public for her 21 year-long role as Olivia Barber Hasting Winters on the daytime drama Young and the Restless and who left a lucrative and secure career to found ReelWorld Film Festival, encouraging and creating opportunities for racially diverse and Indigenous Canadian filmmakers.

Film, television and theatre producer, actor, advocate and Member of Parliament Tina Keeper was presented with an Award of Excellence, but unable to attend.

Order of Canada recipient, writer and academic Lee Maracle received the Joshua Mark Yesno Tribute Award, presented by Mr. Yesno’s mother, who delivered an impassioned address recalling her son, Joshua Mark Yesno baa, an accomplished student of Weengushk Film Institute who fell to a lifelong medical condition while on the cusp of a promising career in film.

Freelance Indigenous performing arts activist and performer, largely responsible for the inclusion of Indigenous music awards at the JUNOs.

Dr. Jeanette Corbiere Lavell might soon need to add another room to her home in Manitowaning to accommodate all of the honours she has accumulated along her 50-year career as an activist and educator, including an Order of Canada. She received the Special Builder Recognition Award and Ms. Obomsawin left her table to bring her own tribute to Dr. Corbiere Lavell in the form of song—causing something one can only describe as a minor earthquake with the power of her voice. (She will be 90 in August, she confided to The Expositor during dinner.)

Ms. Ellis received the 2022 Spirit Award and Denis Bolduc received the 2022 Merit Ward. Both extraordinary women who have contributed immensely to film and television storytelling, especially in amplifying the voices of those coming along in their wake.

Singer/songwriter Robbie Robertson, lead guitarist of the fabled The Band is a legend, and so it should come as little surprise that he was the recipient of a Legendary Influence Award. Mr. Robertson is currently engaged in a screenwriting project can could not attend, but sent his heartfelt thanks and acceptance.

The WIFF Film Awards were then presented, with the Best Film award going to Shash Nakhai and Rich Williamson for ‘Scarborough.’

Best Documentary was presented to Yasmine Mathurin for her documentary film ‘One of Ours.’

The Woman of Distinction Award went to Trudy Louttit for Christine Whiskychan. 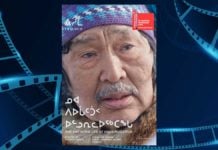 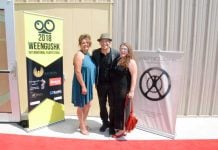