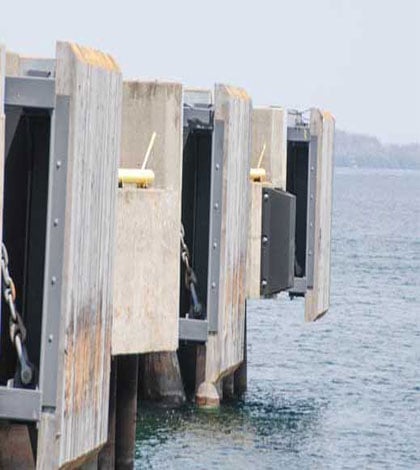 MINDEMOYA—Manitoulin Island municipal representatives were encouraged by federal NDP leader Tom Mulcair to make their concerns known through letters and resolutions that action must be taken by the federal government to ensure the Chi-Cheemaun ferry is running on time next year and the ferry service be promoted properly. With work having been done to fix the fenders at the docks in South Baymouth and Tobermory, the focus is now on the dredging that needs to be carried out.

“Once the real numbers are provided for traffic on the ferry this year it will show a big drop and all municipal councils should have resolutions ready to be sent to the government. We will offer our full support on what is needed,” said Mr. Mulcair at a meeting he and Algoma-Manitoulin-Kapuskasing MP Carol Hughes attended with the Manitoulin Municipal Association (MMA) on Tuesday. “We all want to make sure what has happened in 2013 doesn’t happen again in 2014. Bringing pressure to bear on the government to do dredging and to look at action on water levels will help,” he stated.

The issue of the ferry service having been delayed two weeks this season was part of an overall discussion raised concerning dropping water levels. “On the issue of water levels, I wonder why nothing has come forward concerning the St. Clair River and options being looked at to alleviate the outflow and decreasing water levels?” asked Sandi Hurcomb.

“This is because the Conservatives don’t believe in this, they deny there has been climate changes or other things that has brought this about,” said Mr. Mulcair. “One lousy decision by the (former) transport minister Labelle in not getting the needed work done on the fenders at the docks has affected many.”

Ms. Hurcomb said it seems the government seems to believe it is looking after natural resources, “but we are losing our resources.”

“The proposal for dredging in South Baymouth and Tobermory to accommodate the Chi-Cheemaun has been thrown around,” said Gary Brown. “But after the ship was safe in running this season, nothing has been said since, things have been quiet, everything is taboo.” He explained in 2007, after the ship stopped running for the season, the water level was down but nothing was done with the fenders. “By 2012, they were checking things out and how the ship would dock and they knew in October (2012) there was a real problem with the docking facilities, but didn’t fix anything. In October I brought this issue forward to council (Tehkummah) indicating we should do something because in the spring if the levels were down the ferry wouldn’t run.”

“Now nothing is being said about the dredging that needs to be done,” said Mr. Brown. “Traffic on the ship is down, and people in southern Ontario, some don’t even think the ferry is running. I can’t understand why there were flashing signs all over saying the ferry wasn’t running, but when it started why didn’t these same signs indicate it was up and running again.”

“Everyone knows what’s going on, why doesn’t the North Shore, Manitoulin and Bruce not working together and start yelling about all of this?”

“We appreciate what you are saying,” said Ms. Hughes, pointing out she had been lobbying Mr. Labelle for the work that needed to be done and had brought forward petitions and resolutions from municipal councils on their concerns.

“As for the dredging work, even the assessment work that needs to be carried out has been delayed,” said Ms. Hughes. “This assessment work was to be started this month and I will have my office staff follow up in the next week or so on this with the government.” Mr. Brown pointed out the dredging can’t take place until the ship is not running, “but the preparation work could be done.”

“I would like to thank Carol for all the work she did on this issue,” said Central Manitoulin Reeve Gerry Strong. “All municipalities appreciate the work you have done. Municipalities on the Island don’t always agree on things, but we do agree our whole economic stability will be lost if the ferry isn’t running. We have to do whatever it takes to make sure the OSTC and the government has no excuses for closing down the ferry.”

“One of the biggest problems with the ferry not running on time this year is that people made alternative plans to travel and did not change (back again) because the ferry was then running,” said Ms. Hughes. “It was very confusing for a lot of people. I would suggest everyone write letters and resolutions to keep the ferry going and that it is promoted properly.”

Mr. Mulcair stated, “100 percent of the responsibility for dredging is the federal government’s. I agree all municipal councils should have resolutions ready to raise concerns if the dredging is not done and there is any chance the ferry won’t run in the spring.”

Ms. Hurcomb said in Kagawong that she and her husband own a house they are trying to sell, “and we have a business, and we have seen at a minimum a loss of 30 percent of our business this year. We have basically nine weeks in the summer to make a living. If our house isn’t selling, and business is not good, how do we pay our taxes?”

Ms. Hurcomb continued, “the harbour in our town (Kagawong) needs dredging to be done. Less boats are coming in and people that do have boats aren’t using them. This is not about boats running, it is about a community surviving and thriving.”

Mr. Mulcair said he had heard earlier in the day from other business owners on the Island using a similar figure as Ms. Hurcomb, that the business has decreased 30 percent this year.

“And so much has been downloaded onto municipalities the past few years, by the government,” said Ms. Hurcomb. “When our water system was downloaded onto our municipality we had a capacity of 5,000 users. We have 140 homes. The new water system was jammed down our throat and we had little time to have it constructed and we ended up with a contractor that did not exactly have the best product. Now we have to overhaul our current system because US Filtration has gone out of business.”

Billings Mayor Austin Hunt noted the present water treatment plant system in Billings had been established six years ago. “Every municipality had to put in a new type of water plant system.” He explained in Billings the system cost about $6-7 million and at the time the government said it would provide 80 percent of the funding. However, the first year no funding was made available and municipalities had to come up with the entire cost. “This also meant we had to raise our water rates considerably, which didn’t make our taxpayers happy. Now we find out US Filtration has gone bankrupt and we have to revamp the equipment in the plant.”

Water users in Kagawong had to fork out $4,800 per household on top of the quarterly bill they had received. “How can a municipality handle these type of costs?” asked Ms. Hurcomb.

Assiginack Reeve Brad Ham said his municipality is in the same position as Billings.

Mr. Mulcair was told this is a similar concern with many municipalities in North America who had dealt with US Filtration.

“There may be an opportunity for getting funds out of the federal government as well (for the new water systems),” said Ms. Hughes. “Especially if a number of municipalities are in the same boat.”

The federal government has to step up to the plate, partner more with the provinces and provide the funding support municipalities need, said Mr. Mulcair. However, “I know in the case of the Federation of Canadian Municipalities, Prime Minister Harper won’t meet with them. When we have communities that don’t have clean water in a country like Canada, it is unbelievable to me. What is needed is a change in mentality, it needs to be done.”

“Municipalities have the right to be so concerned,” said Ms. Hughes. “Recently we had a big US city declare bankruptcy and another Northern community has raised concerns with their finances and may do the same.”

Wayne Bailey pointed out the people of Ontario value wildlife habitat and vegetation, as does Manitoulin.

“The provincial government put in place several initiatives for a greener Ontario, such as the managed forest program. But now legislation is in place that makes some lands purchased for conservation 100 percent tax exempt. This has been downloaded onto the municipalities and we do receive payments in lieu. But now when a conservancy group purchases property it is automatic through MPAC that this gets tax exempt status,” said Mr. Bailey. “While Burpee-Mills has appealed this in two cases and won, another large section of land is being looked for similar use, and would be tax exempt.”

“Turning some of these lands into conservation areas is probably the best thing for these lands, by why does the municipality have to pay for the taxes lost. Why doesn’t the province or the feds?” asked Mr. Bailey.

Mr. Mulcair said if the NDP forms the next government, “we will be responsible, we won’t download onto the province or municipalities.”

Ms. Hughes said that every community and area in Canada is different and maybe some of the larger cities can take the financial hit of conservation lands being tax exempt, but smaller municipalities can’t.

“They don’t understand. When policies are put in place it is best done with working with the provinces and municipalities,” said Mr. Mulcair. “But the federal government is not interested in sitting down with the province.”

“I agree with you (Ms. Hughes) and Mr. Mulcair in the need for bringing back discussion between the province and feds. There has been a joint infrastructure funding program put in place, but this has been frozen because the two governments won’t talk,” said Northeast Town Mayor Al MacNevin. “Mr. Harper almost seems to have a vendetta with Ontario.”

“I couldn’t agree with you more,” said Mr. Mulcair. “The attitude of Mr. Harper and his government defies understanding. Their attitude with the government in Ontario is reprehensible.”

MMA chair Ken Noland then brought up the issue of the 1990 land claims. “There isn’t a municipality on the Island that doesn’t agree the land claims with First Nations need to be resolved. But not if costs are going to be downloaded onto the backs of the municipal taxpayers. The government is making agreements with First Nations to allow them to purchase land (in municipalities), but it may mean taxes would be lost by municipalities on the lands purchased.”

While there needs to be allowances made for First Nations to purchase lands, compensation needs to be provided to the municipalities as well, said Ms. Hughes.

Mayor MacNevin said the municipalities have been holding negotiation meetings with government representatives and First Nation representatives on the issue. He stressed, we are still meeting and nothing has been passed into law or the land claims that indicate that these lands will be tax exempt and the municipalities will lose on their tax rolls. “We are still meeting.”