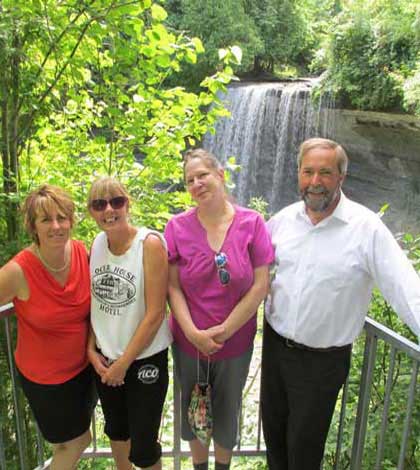 “Part of the work we are doing is meeting with First Nation and municipal leaders across the country,” Mr. Mulcair said in an interview on Tuesday, as part of his visit to Manitoulin Island. “It is important that in order to put our platform together for the 2015 election campaign, that we build on the consultation we have already undertook and listen to the concerns and issues that are affecting people the most.”

“For instance, it is crucial to have a nation to nation working relationship with First Nation-aboriginal peoples and communities. This is a daunting task, but in order to do all of this it is far more important to be listening to what people-communities want and we need to have a lot of information.”

“It is essential everything flow nation to nation, for far too long the government has made promises to First Nations they haven’t kept, such as the Kelowna Accord,” said Mr. Mulcair. “Another good case example of this is that 18 months ago the Harper government said it would take steps to improve First Nation education funding, with First Nations getting 50 percent less than non-Native communities for education. They said they would solve this issue, but once again there has been absolutely no indication from this government they are going to solve this issue.”

“The core of Canada dealing nation to nation with First Nation-aboriginal peoples is respect and recognition,” continued Mr. Mulcair. “If I was the parent of an aboriginal child I would never accept the fact that they have been slotted into a category where they are receiving 50 percent less in education funding that non-Native children. It is unacceptable,” said Mr. Mulcair.

“Governing is about making priorities and committing to them,” stated Mr. Mulcair.

As for the news lately about residential schools and the way First Nations students were treated he said, “this is a great example of a government that needs to recognize what has taken place in the past and needs to be dealt with and acknowledged, as something that can’t happen again. One of the best moments I have ever been around for was when Prime Minister Harper, and Jack Layton who had coaxed him into it, apologized to all aboriginal people in the country in the Parliament for what happened in the past. However, since then the supposed to be compensation to aboriginal people has not come; now the government has instead decided to withhold information on what actually happened.”

“This government has no national transit vision for Canada,” said Mr. Mulcair, who is in favour of a national transit strategy that would guide the country’s infrastructure spending. “Right now we have for instance a TransCanada highway that is two ribbon and railways that were started in the 1800s that need a lot of support. Our transportation system in this country is an embarrassment, especially when we are one of the top countries in the world.”

Carol Hughes, MP for Algoma-Manitoulin-Kapuskasing, who was on the tour along with Mr. Mulcair, told the Recorder, “we know how much economic importance the Chi-Cheemaun has for the Island and Tobermory. And there are people who are still reeling because the ferry didn’t start its schedule on time this year, with it delayed two weeks. We need to make sure a delay never happens again. On the issue of water levels we need to keep in mind there are solutions. The IJC (International Joint Commission) made recommendations and the government needs to continue to follow up on these recommendations. We need the government to act and take the issue of climate change seriously as well.”

When talking about government waste, Mr. Mulcair stated, “one of the most galling things in my time as a politician is the unacceptable lack of accountability in the House of Commons with the total uselessness of an unelected senate.”

“Of all the things government is supposed to do and provide, nothing is more important than safety,” said Mr. Mulcair. “This government loves being in power, but not government. They do things like cut millions in railroad and food inspections, the latter which resulted in the biggest meat recall in Canada.”

As for the potential for Northern Ontario, Mr. Mulcair said, “there is a tremendous opportunity for economic growth in Northern Ontario. This can be realized by working together and for the government to step up and provide the things that are needed here and the rest of the country to allow progress and growth and development to take place.”