“Currently our program operates from October to March, a regular hockey season,” he said. “The H4D program focuses on skill development and fundamentals for each player from the divisions: playground (ages 2 and up), tyke (U-7), novice (U-9), atom (U-11) and peewee (U-13).”

Each player in novice to peewee participated in four weeks of hockey school with Jim Emmett from Protech Hockey Academy in October and November, while each player in the novice to peewee divisions will participate in 12 weekly (November to March) enhanced skill development sessions delivered by PnP Hockey. “In addition to this, all players in all groups have their regular team practice once a week and one game a week,” explained Mr. Enosse. “New this year to the H4D program is the addition of two girls’ teams in the atom and peewee divisions.”

Mr. Enosse explained that, “currently our rosters include a total of 125 players and 24 coaches. Each division has three to four teams with the exception of the two youngest divisions. Our game format is 3-on-3, with on-ice officials, time keeper and is under the direction of the Waasa Naabin Youth Centre staff for COVID screening and protocols as outlined by the local public health guidelines and Wiikwemkoong Pandemic Team.”

With the COVID-19 pandemic, Wiikwemkoong will not be playing against teams from other communities in the peewee and underage groups, notes Mr. Enosse. “This will be the second year we will operate as a community bubble for the hockey season,” he said. “Last season we were able to successfully operate H4D for a full season from October to March 2021 with the current format. Team names and logos were chosen last year from a player contest based on submissions and we ended with a year-end tournament and a player giveaway.” 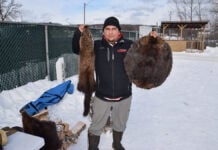