WIIKWEMKOONG – Sombre, gray skies and a chilling north wind Friday morning set the tone for a day of ceremony to remember both Missing and Murdered Indigenous Women and Girls (MMIWG) and male victims of violence with ties to Wiikwemkoong and across Turtle Island.

“Our people deal with a lot of domestic violence and abuse. It’s been in this area for a while and it continues. I’m glad we can have gatherings like this to gain more awareness of this issue,” said Nookomisnaang Shelter community wellness worker Dorothy Wassegijig-Kennedy, the organizer of Nookomisnaang’s contribution to the MMIWG Honouring and Awareness Day, October 4.

This event was called the Drum Beats Conference and is the first event of its kind to be hosted in conjunction with the new Nookomisnaang Shelter. Wiikwemkoong has been holding similar tribute events for most of the past decade.

The day began with a sacred fire in a tipi outside Nookomisnaang Shelter where gatherers reflected on their own experiences with the crisis, shared stories of loved ones past and expressed their remorse at the situation to the sound of hand drumming and singing.

Then, the Wikwemikong Tribal Police Service escorted a march from the shelter to the arena where the rest of the day’s events took place. The sounds of the drums and singing echoed through the community as they passed along their route.

“We’re hoping people will become more aware of the issue. Often people think we’re isolated on the Island and think this is a safe community, sheltered from the abuses that go on in other parts of the country. We want young people especially to be aware of the dangers,” said Ms. Wassegijig-Kennedy. “We want to instill that awareness for people to take care of themselves and their families.”

At the arena, Nookomisnaang Shelter manager Mary Pheasant spoke first and called upon the memory of Vernon Jacko, a young man from Wiikwemkoong who went missing in Ottawa and was later found dead. She gave some information on the shelter and the services it provides.

“It’s very rewarding to see change happening in people’s lives, seeing them get back onto their feet and getting their power back,” said Ms. Pheasant. “We pray everyone will get the help they need in some way, somehow.”

Wiikwemkoong band manager Kevin Wassegijig spoke next. He said a day of this nature allows all to reflect on their pasts and think about the many who have died as a result of violence. He said the name of Nookomisnaang (which translates to Grandmother’s Place) reminded him of his own childhood and finding a safe refuge with his grandmother.

“I hope we get to a place where these kinds of services are not needed as much,” said Mr. Wassegijig. “With Nookomisnaang and the healing lodge, I’m hopeful they will get us back to that.”

Pamela Maguire-Smith then introduced herself and talked about the reiki healing services she was offering. She talked about the ways abuse had impacted her life and the lives of many for whom she has cared.

Afternoon speaker Brenda Roberts also introduced herself and the work she has been doing for Noojmowin Teg’s relatively new MMIWG program. She brought up a grandfather medicine of a pine-based soothing cream and said all were welcome to try it.

Alison Recollet introduced the photo display she had brought that featured victims of the MMIWG crisis and shared stories of her own experiences with childhood traumas, substance abuse and violence.

Ms. Recollet acknowledged some of her childhood traumas which have come from community institutions such as a traditional healer, bullying in schools, her time at the Kaboni Indian Day School and her relationship with her mother. Ms. Wassegijig-Kennedy also acknowledged the issue of on-reserve institutions having contributed to trauma.

“At home people have had a lot of abuse and violence, poverty, and with having the residential school history and the church abuse history, that has a cycle of its own. Many of our people are affected because the impacts go around in a cycle,” she said.

While the participants enjoyed lunch, representatives from Firsttel TV5 played a documentary that highlighted historical footage of powwows in Wiikwemkoong from as far back as 1970.

The afternoon featured sessions about cattail doll making and associated teachings, self-empowerment, cell phone safety, ‘I Wear my Heart’ and community testimonials. A traditional feast followed in the late afternoon, followed by a powwow.

“We’re encouraging people to dress in their regalia because we’re hoping the spirits will see them. We hope to have a healing dance from jingle dress dancers; we’ll have people in a circle and they’ll dance around them,” said Ms. Wassegijig-Kennedy.

Victims of domestic violence are not alone. If you have been assaulted by an intimate partner or know someone who has, there are local resources here to help. The Manitoulin Family Resources website at MFResources.net can provide assistance. A toll-free call can also be placed to the Assaulted Women’s Helpline at 1-866-863-0511 where your information will remain anonymous and confidential. If you are in an immediate crisis, dial 9-1-1. 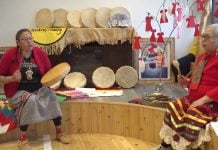 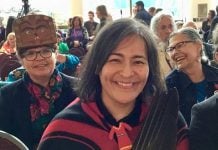 The fulfillment of the Calls for Justice requires a decolonizing approach