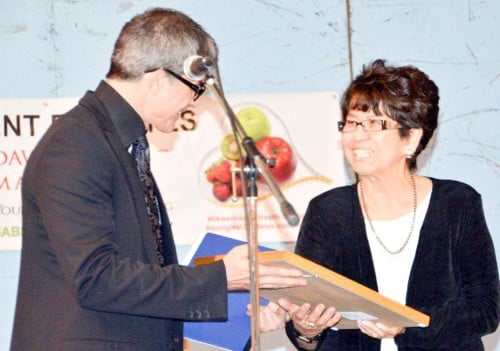 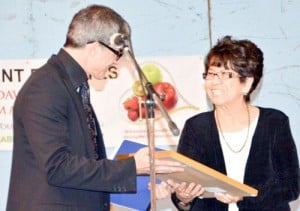 WIKWEMIKONG—One year after his passing, the community of Wikwemikong and the Wakegijig family celebrated the life of the late John Ronald “Ronnie” Wakegijig, a musician, politician, traditional healer and a man who has left a lasting impression on the Manitoulin community at large.

Wikwemikong was alive with his spirit on Friday, with the day beginning with a sunrise ceremony at the medicine lodge at the Nahndahweh Tchigehgamig Wikwemikong Health Centre, a diabetes walk to raise awareness of the disease, something Mr. Wakegijig himself strove to do while providing residents of Wikwemikong traditional medicines to help cope with the affliction, a community feast and an afternoon of memories, giveaways and acknowledgements.

Bea Shawanda and her son Byron Edgar were the masters of ceremonies for the event, and Ms. Shawanda urged the group gathered in the morning at the Health Centre to spend the day celebrating “Ron the man, not Ron the politician.”

“He was there for everybody,” Mr. Edgar added. “His greatest gifts were his words—simple, kind and full of love. He was one of my favourite people. He stood for something I don’t see a lot of—acceptance. He was there to take care of his people in the best way he could.”

After the diabetes walk, which began at Wasse Abin High School, the community gathered at the Wikwemikong arena for the opening ceremonies for the one-year memorial. Children from the Junior School performed two songs in Anishnabemowin and drummed to the delight of the audience.

Ms. Shawanda and Mr. Edgar welcomed Chief Hazel Fox-Recollet to the stage. She told the crowd that both Mr. Wakegijig and the late Henry Peltier helped to guide her in her leadership role. The chief spoke of the path of the two ways of life that both Mr. Wakegijig and Dr. Jack Bailey “put together for us” and the healing and wellness of the Anishinaabe people. The duo of Mr. Wakegijig and Dr. Bailey was an integral part of the day as both men worked hard to bring both traditional and Western medicine together. Together Chief Wakjegijig and Dr. Bailey helped to design and bring about the medicine lodge in the Wikwemikong Health Centre, and through their example, the Mshkikii-Gamig Medicine Lodge at the Health Sciences North also came to fruition. Earlier in the day, a painting commissioned by Dr. Bailey’s son Michael Bailey in honour of the special bond between the two men was unveiled at the Health Centre.

Chief Fox-Recollet shared her personal story of healing with the audience. Twelve years ago she experienced convulsions in the night and ended up at the Manitoulin Health Centre in Little Current before being sent by air ambulance to Sudbury for further treatment.

“I was in a coma for four days,” she shared, noting that doctors had told her family to ready themselves for her passing.

On the fourth day a powwow was being held in Sudbury where friends conducted a healing ceremony and dance for her. “I truly believe in the power of prayer and healing,” the chief said. “I woke up and was transferred back to Little Current. When I woke up in Little Current, Ron was there by my side. When he was there I felt so much love and so much care from the community. He was always a leader and an inspirer to live life to the fullest and help people when they can.”

Chief Fox-Recollet said that when she returned home she sought the healer out for traditional medicines so the convulsions would never happen again. He gave her medicines, which she took faithfully while giving thanks to the Creator.

“I drank the medication for three months every day,” she said. “I had three blood clots on my brain and six months later I asked Dr. (Roy) Jeffery for a MRI (magnetic resonance imaging). They found no scar tissue. I grew even more thankful for the medicine that healed my bloodstream and my body.”

“I ask that we continue this path,” she continued. “The healing of wellness and forgiveness and love. This is the way to a healthy community. We must continue to bring forward this Anishinaabe way of life, the medicine wheel and seven grandfather teachings.”

Mr. Wakegijig’s wife Rosemary and their children and grandchildren then addressed the crowd. Ms. Wakegijig shared fond memories of her husband, including his love of books, in particular First Nations history, his laughter and occasional grumbling.

She shared how his quiet and gentle ways would calm even the most irate community member and noted that their youngest daughter Kristen cared for her father during the end of his life, forever making dirty pots and pans for her to clean, a testament to his love of the kitchen.

“He was a good cook, hockey coach, musician and orator,” his daughter Dr. Annelind Wakegijig added, noting her father and Dr. Bailey as her mentors. “I say miigwetch to the many teachings and to those who supported him on his days on earth. In medical school they talk about the ‘art of medicine’ and it strikes me now how it is an art. I now carry on the role of facilitator of health on behalf of my dad.”

Dr. Wakegijig shared how delivering her father’s eulogy was the most difficult task she had ever encountered. “It means a lot to the family that he won’t be forgotten,” she said.

Mr. Wakegijig’s daughter-in-law Jennifer spoke on behalf of her husband John, their small daughter and son by her side, who was unable to attend the memorial. He wrote in a letter the importance of his two children spending time with the family and those who knew his dad so they might carry those memories of their grandfather. The son acknowledged that his father touched the lives of many across Canada, even in the far north where this branch of the Wakegijig family resides.

Regional Chief of the Assembly of First Nations Angus Toulouse also took a turn at the podium, urging that the traditional ways should never be forgotten. “Ron was a leader that shared that vision,” he said.

“Jack Bailey brought me into this world and Ron showed me the world of politics,” Chief Madahbee began, noting his first encounter with Mr. Wakegijig was as a musician when he was a young man attending dances in Wikwemikong.

Mr. Madahbee, a former T-bird, also recalled the chief coming into the dressing room before games to share a few encouraging words with the players.

“Ron was a tremendous mentor to me,” Chief Madahbee added, calling him among the best leaders in North America. “I ran for Grand Council Chief at age 27 against very seasoned politicians. Ron coached me on what to say, what to do. He told me to get nominated near the end, but never last, so I could hear their speeches and what they had to say. He handed me the eagle feather and told me to march to the front and start talking like a leader should. I got the job at age 27.”

Deputy Grand Council Chief Glen Hare said that before he had ever met Mr. Wakegijig, he had certainly heard of him and looked forward to the day they finally met.

Chief Hare also shared a personal story of healing at the hands of Mr. Wakegijig when he had suffered an affliction for two years. Finally seeking the help of the traditional healer, the medicine he received healed him 100 percent within two months.

Other speakers throughout the day shared their memories and those in the audience were also encouraged to share their own personal stories of their dealings with Mr. Wakegijig. The Wakegijig family also held a giveaway with many gifts for the community in honour of their father, grandfather and husband. The gift of a blanket was also bestowed to Dr. Bailey from Chief Fox-Recollet.

Luc Vincent, manager of the Ontario Honours and Awards Secretariat of the Ministry of Citizenship was also in attendance, presenting Ms. Wakegijig with her husband’s Order of Ontario, which would have been awarded after his passing last May. He and Ms. Wakegijig shared a hug onstage followed by the proud wife walking through the audience to show the award to many onlookers.

The memorial to the traditional healer and chief and councillor of nearly 30 years concluded with a round dance and social at the arena.