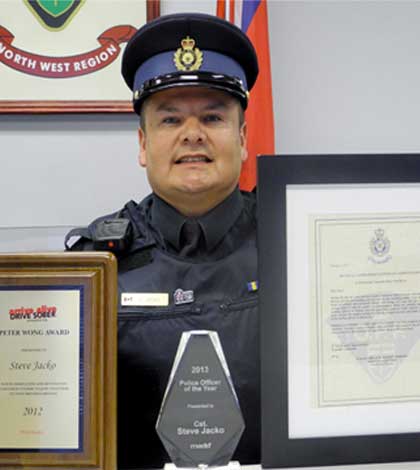 “There are so many candidates throughout Canada that are nominated for this award that it makes it a real honour and privilege to have been chosen for this award,” stated Mr. Jacko, who lives in Kenora and works with the Kenora OPP.

The award recognizes the significant contributions of police services in helping to reduce impaired driving, and is presented annually. The award is presented in memory of Constable Terry Ryan whose life was tragically taken in May 2002 when he was killed in a two car alcohol-related crash while he was on his way home from a police function in the Durham region.

For Mr. Jacko, who is a 23 year veteran of the OPP, (mostly in Kenora) preventing drunk drivers from being on the road is a personal story for him. “My fiance’s father was killed by a drunk driver about 15-16 years ago. He was just walking, crossing an intersection, when the impaired man in a vehicle ran him over and kept driving. The driver was never caught.”

“I’ve investigated quite a few motor vehicle crashes in my 23 years, with drinking and driving, involving both kids and older adults. It is a terrible tragedy when someone is killed by a drunk driver,” said Mr. Jacko. “It effects families and entire communities.”

Mr. Jacko told the Recorder he first got interested in becoming a police officer, “as my dad, Art Jacko, was the chief of police in Wikwemikong.” He said his father’s influence encouraged him to follow the same path and that he noticed his father used to care for, and was always helping out with, the community.

He studied Law and Security at Cambrian College before joining the OPP in 1990. He was posted at the Kenora OPP detachment and has done most of his policing in the general area of Kenora, Grassy Narrows, Minaki and Sioux Narrows.

Mr. Jacko currently works regular patrol but spends a great majority of his time dedicated to combating impaired driving in the Kenora area. He laid a total of 59 impaired related driving charges in 2012 and as of September 1 this year, he has laid a total of 42 impaired driving charges. He was recently recognized for being in the top 10 of the entire OPP for traffic statistics and also received the OPP Commander’s Letter of Recommendation for exemplary effort and skills with respect to his job.

“We work very hard in preventing drinking and driving and in my free time I will set up RIDE (Reduce Impaired Driving Everywhere) programs,” said Mr. Jacko. Drinking and driving, “is the number one criminal offence in Canada, over 10,200 Canada drunk driving charges were laid last year, more than any other criminal offence in the country in a year.”

“I don’t want people having to remember their loved ones been killed by a person who was drinking and driving,” said Mr. Jacko.

Last year Mr. Jacko received the Peter Wong Sudbury Arrive Alive award, as well as the OPP Letter of Commendation, being the only officer in Ontario and Canada to have ever received three awards from three different organizations within a year.

On the MADD website it is stated, “In the area of impaired driving enforcement, Constable Steve Jacko’s work ethic and performance is second to none. Constable Jacko performs regular calls for service and assists his fellow officers with general law enforcement duties.”

However, the rest of his time during shift is dedicated to combatting impaired driving. He completes several RIDE (Reduce Impaired Driving Everywhere) initiatives each shift. When he is not conducting RIDE check stops, he is mobile on directed patrols searching out impaired drivers. In 2012, Constable Jacko laid a total of 59 impaired related driving charges, 56 three day suspensions for drivers registering warning and two seven day suspensions for drivers registering their second warning. Constable Jacko was recently recognized to be in the top 10 of the entire OPP for traffic statistics, and also received the Ontario Provincial Police Regional Commander’s Letter of Recommendation for his exemplary effort and skills with respect to his job. Constable Jacko has invested countless hours to serve the citizens of the City of Kenora. He makes it his priority to keep the city safe, with a strong focus on road safety. So far this year he’s laid 42 impaired driving charges, in addition to the 59 laid in 2012.”