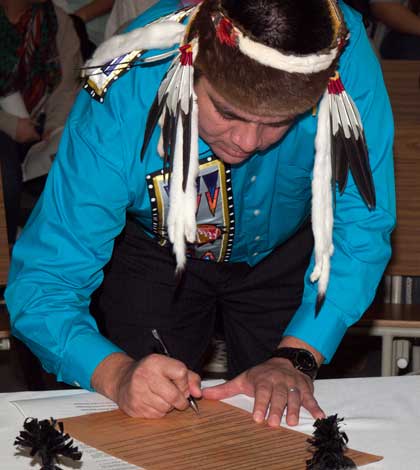 WIKWEMIKONG—In an historical event for the Wikwemikong Unceded Indian Reserve, chief and council came together before the youth of the community to publicly declare a change in the direction of its mandate and sign the newly developed Children’s Bill of Rights.

The event, held at Wikwemikong High School last Wednesday morning, began with a procession, grand entry style, which led with the students followed by the adults then dignitaries, including Deputy Minister David de Launay of the Ministry of Aboriginal Affairs; Irwin Elman from the Office of Provincial Advocate for Children and Youth; Diana Cooke, director of advocacy service, Office of Provincial Advocate for Children and Youth; Stephanie Prosen, manager, aboriginal unit, Ministry of Children and Youth Services; and Denise Morrow, executive director, Kina Gbezhgomi Child and Family Services, as well as chief and council.

“This was an opportunity for the council to show its sincerity in providing for the children of the community the best possible start in life,” Chief Duke Peltier told The Expositor in a follow up interview. “The Bill of Rights is a mechanism for the kids to rely on and to hold the leadership accountable.”

“Whereas we believe that all children are created with the inherent right to be safe, to be loved and nurtured, to be heard and believed, and to have adequate health care, nutrition and shelter,” the Bill of Rights begins, followed by nine other principles pertaining to the safety, care, education and welfare of the community’ s children.

“Now therefore be it resolved that Wikwemikong chief and council proclaim the Wikwemikong Children’s Bill of Rights in order to assure that all children in our community who are under the age of 18 are provided with adequate food, clothing, shelter and health care; that they receive nurturing, appropriate cultural teachings and adequate education—all of which are their inherent and basic rights as our Anishinaabe children,” the Bill of Rights states.

Council had made the decision to focus its mandate on the children last spring, with the draft Bill of Rights presented to chief and council in September.

“We are focussing the agenda by prioritizing the children’s needs and taking into account that their voices be heard at every level of administration and leadership,” the chief said.

During the signing ceremony, a group of Grade 4 students also had the opportunity to be heard, sharing with their leaders their thoughts and hopes for their community’s future, as well as asking questions of their leaders.

Chloe also asked for a pool to allow everyone the opportunity to learn how to swim and asked for chief and council to lower the “house bills so people can live in better homes.”

Autumn said she wished for a new rink, track and soccer field, as well as a bigger school (with all the same teachers) with bigger classrooms and gymnasium.

Damian’s wish for his community is a new school with computers for all the children and a brand new playground. “I want it to be big and fun for us,” he said.

“What I would like to see in Wikwemikong are new parks,” Lattrell addressed the leadership. “There are only two parks. I would like to see the new parks on Henry Street, in Rabbit Island, and in Buzwah. I wish for other kids not to get bullied and I want everyone to be proud that they are from and living in Wikwemikong. And, in the future, if you give us a chance to talk, please listen to what we have to say.”

“I would like it if you can help and teach people to recycle and compost more often so that there is less garbage at the dump,” Maria told the crowd. “Chief and council please help our police to get the drugs off the street and make it safe for us to walk safely in the community without being scared.”

The chief explained that council and administration are now in the implementation phase, taking into account the young voices heard on Wednesday. “There has to be an adjustment in the work plans of each department so they become the primary objective. Some will take more resources and time than others. We are also cognizant of the fact that there are funding agencies out there that would be happy to meet with Wikwemikong to meet the needs of its citizens.”

The chief said he was told that this is the first time that the children have had the opportunity to address the governance in this way. It is his hope that the children of Wikwemikong can rely on this document going into the future and through each consecutive council.

Chief Peltier explained that the leadership of the community understands that some of the issues the community is facing “are like large mountains” and that sometimes it’s tough to decipher where to start.

“We need to start somewhere and the most logical place is to start with the children,” the chief added. “Through nurturing them, shaping their young lives, we will shape the way we envision the community to be in the years to come.”

Chief Peltier said the community response to the Bill of Rights has been overwhelming in support and emotion, as has been the response from other First Nation communities right across Canada.

“It’s a positive step forward for us, leading the way,” the chief concluded.