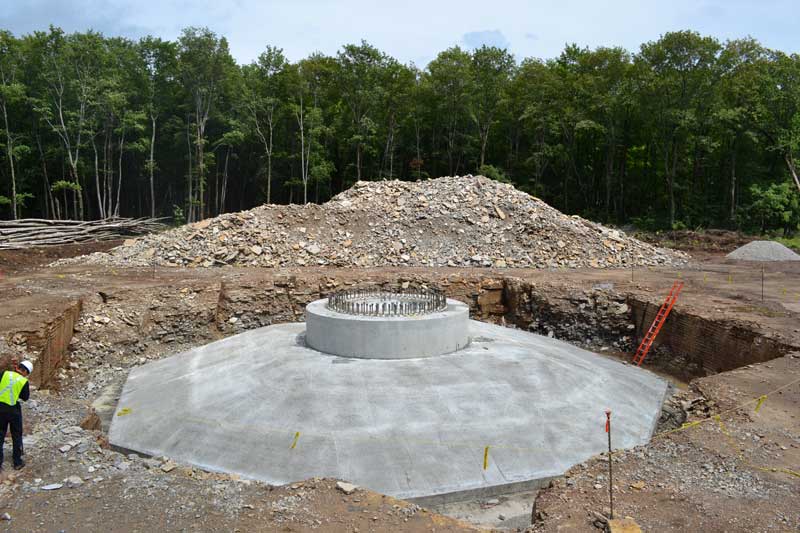 MANITOULIN ISLAND—As evidenced by the large barge in the North Channel or numerous cement trucks headed to and from the Green Bush, construction is well underway on the McLean’s Mountain Wind Limited Partnership’s (a joint project between Mnidoo Mnising Power General Patership Inc. and Northland Power Inc.) wind farm.

The Expositor met with site manager Stan Stret last week for an interview and a first hand look at the construction of the 24-turbine wind farm.

“Right now there are a lot of elements of the construction going on,” began Mr. Stret. “We have completed six of the cement wind turbine foundations, while other sites are in the process of being excavated and some are placing the rebar.”

“The foundation is made of up 40 tons of rebar and the concrete pouring overtop takes around six or seven hours,” added Mr. Stret, as he pointed to one of the large structures.

“The in-water trenching is also taking place right now in the North Channel,” continued Mr. Stret. “They are trenching to the depth of 10 feet to bury the marine cables that will connect the substation to the switching yard at Goat Island.”

Mr. Stret took The Expositor to Goat Island, showing the grounds that will eventually house the switchyard, isolating the turbines from the grid.

“There will be a substation on Manitoulin that takes the 34.5 KV that the turbines produce and sets it up to 115 KV that will then be able to tie into the existing 115 KV transmission at Goat Island,” explained Mr. Stret.

Leading down to the North Channel on the shore of Goat Island is the trenched HDPE pipes, covered in cement that will eventually house the marine cables from the North Channel underground to the switching yard.

“We’ve placed a silk curtain to protect the channel and the barge has a backhoe which is digging the 10-foot trench along the shore of the channel,” said Mr. Stret. “Where there is 10 feet of water above in the channel, the cables will come up and lie on the floor of the channel, covered by a concert blanket.”

A temporary rock berm was also created at Goat Island, using 50 truckloads of rock from the Corbiere quarry to hold the weight of the backhoe during the trenching, though last week the barge was being utilized to trench further out. As of Monday, the barge had moved to the south side of the channel and had begun the in-water trenching along the opposite shore.

Mr. Stret explained that the crane that sits on the barge will be used in August when placing the submarine cable along the bottom of the North Channel.

Transmission line poles can be seen along Harbour View Road, and these will eventually connect the substation on top of McLean’s Mountain to the marine cables that will travel along the bottom of the North Channel to the switching station at Goat Island.

The delivery of the towers, which is delivered in three types of loads, towers, blades and machine heads, is scheduled to start near the end of August, but is subject to Ministry of Transportation changes.

See future editions of The Expositor for more updates throughout the construction phase. For more information on the project visit www.northlandpower.ca.