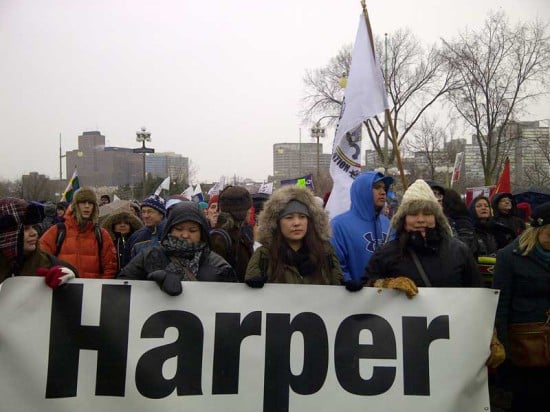 NIPISSING—Anishinabek Nation member communities joined First Nations across Canada, including the Idle No More movement, in what will be the first in a series of National Days of Action this past Wednesday.

“The best way First Nations and other Canadians can express their disappointment with federal indifference is to translate their concerns into action,” says Patrick Madahbee, Grand Council Chief of the Anishinabek Nation.

Mr. Madahbee confirmed the 39 Anishinabek Nation member communities would be joining with First Nations across Canada Wednesday in what will be the first in a series of National Days of Action.

“Canadians from all walks of life have implored the Harper government to reconsider the undemocratic manner in which they have stifled debate and rammed massive pieces of legislation through Parliament,” said the Grand Council Chief. “These so-called omnibus bills threaten the safety of our lakes and rivers, the fish that inhabit them and ignore constitutional and legal requirements to work with First Nations on issues that affect our peoples.”

“Now other citizens understand our frustration,” said Chief Madahbee. “We have pursued all the proper political channels, but this government refuses to respect First Nations rights as referenced by Canada’s constitution, supreme court rulings, and the United Nations Declaration on the Rights of Indigenous Peoples, to which they are a signatory.”

“Mr. Harper may have pulled the wool over some people’s eyes last week in Ottawa, but Chief Theresa Spence (of Attawapiskat) is still fasting for justice. We call on other Canadians to be understanding and supportive of our efforts in the days ahead to demonstrate to members of the Harper caucus that they were not elected to ignore the will of the people.”

The Manitoulin Ontario Provincial Police (OPP) advised on Tuesday that there would be a slow down on Highway 6 at the Birch Island entrance on the Whitefish River First Nation (WRFN) between Little Current and Espanola on Wednesday. The slow down is WRFN participating in an education campaign by handing out information pamphlets in support of the Idle No More protest activities. The event took place between 9 am and noon.

The protest activities concluded with a protest demonstration and round dance. The planned event caused a traffic delay for a short period of time.

“The OPP is working with those involved to minimize the impact on the travelling public and to ensure order and public safety,” a release noted. “Our objective in policing any road closures/blockades is to work to restore the orderly flow of traffic in the safest manner possible.”

“The OPP recognizes the Charter rights of everyone to freedom of expression and peaceful assembly,” the OPP release notes. “The overall OPP objective is to work with all parties to ensure public and officer safety and to maintain orderly conduct and peace. The OPP has no role to play in resolution of the underlying issues. The OPP thanks everyone for their patience in dealing with traffic disruptions.”