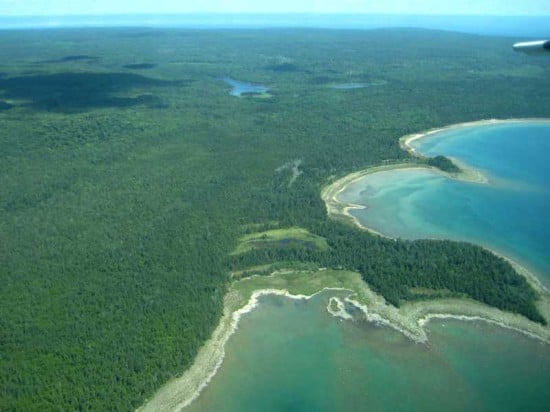 COCKBURN ISLAND—Cockburn Island Township council has approved Mayor David Haight signing an open letter to local residents and stakeholders, indicating its support of the Nature Conservancy of Canada (NCC) purchase and its project plans concerning over 22,00 acres of land on the island.

“Council adopted the open letter, approving the signature of the reeve,” Brent St. Denis, clerk of Cockburn Island told the Recorder on Monday.

“Council sees the purchase of the property and the NCC plans as being a positive for Cockburn Island, in terms of development and preserving the island the way they (NCC) has proposed,” explained Mr. St. Denis. “It is a way to protect the island and the NCC has stated its continued willingness to work with the community and allowing traditional activities such as hunting on the lands to continue.”

As reported previously, the NCC had announced it has purchased and now owns title to just over 22,300 acres of property on Cockburn Island. The island is the 10th highest conservation priority in the Great Lakes.

The total budget for the Cockburn Island project is $15.2 million, of which $10.2 million had been pledged by early September. The pledges include $5 million from an anonymous, but passionate American conservationist who sees this project as an opportunity to give back both to nature and to the Great Lakes communities, an NCC release states.

“As Mr. St. Denis indicated Mayor (David) Haight had signed the open letter to NCC and it was endorsed by council,” John Grant of the NCC told the Recorder on Monday. “We are very happy this has been done and hope that those people who had thought of making a contribution toward the purchase, but had some concerns, they may come forward now. As we’ve indicated previously, we took out some bridge funding in order to purchase the property.”

“Some people in the Manitoulin and Sudbury areas have been interested in providing support but have been cautious up to now because they weren’t sure of what the community support has been for the project,” explained Mr. Grant. “This letter goes a long way toward addressing these concerns.”

“We’re still seeking help financially of roughly $1 million, and are still approaching people for support,” said Mr. Grant. “With the support of council and the community we may receive more support.”

In the letter written by Mr. Haight, and endorsed by council, to the people of Cockburn Island and others to whom it may concern, dated January 10, 2013 he states, “this is a letter of support for the Nature Conservancy of Canada’s (NCC) project to conserve over 22,000 acres of forest land on Cockburn Island. NCC’s goal is to have most or all of its property revert to an old growth forest and be a site for ecological research. This aligns with almost every islander’s vision for our community. Council members realize that NCC holding the land for conservation appears to be very compatible with our goal to have our island home remain almost completely undeveloped. With its beautiful shoreline and rich forest we have long been concerned that a developer at some point in time would buy up a large block and then harm the landscape through some combination of intensive commercial development of the shoreline or interior that might compromise the natural beauty of our island. The township council has been vigilant in protecting the landscape by its refusal to sell or stop up the township’s island and interior perimetre roads and the marine allowances.”

“There is a long and important tradition of deer hunting on Cockburn and the NCC will accommodate community interests by committing, as it did at a recent municipal council meeting, to allow hunting to continue,” wrote Mr. Haight. “It is understood that historical access roads and trails will remain open. As mayor and a life-long resident I am pleased that the NCC has accepted that the long standing history of this island and its citizens concerns will be an important consideration in the development of the NCC lands management plan. Residents and ratepayers share with the NCC an interest in protecting the plants, forest and wildlife that live and thrive in our great island community.”

Mr. Haight continued, “we appreciate that the NCC has also committed up front to ensuring there will be no net loss in revenue to the township as a result of an application under any tax reduction program. NCC has pledged to make up any difference in municipal tax revenue that might result so as not to add a tax burden to other property owners in the township.”

Cockburn council, “is pleased that NCC staff will be seeking input from the island’s residents and community organizations when writing up a management plan for its property. Speaking for myself I plan to accept their offer that the community plays a strong role in designing and implementing the NCC’s conservation project; and I will continue to share my knowledge and perspective while doing my part to protect the municipality’s interests. We share many similar concerns, such as keeping non-native plants in check-and I believe it is best we consider how to tackle such issues together.”

“I was born on Cockburn Island over 70 years ago,” wrote Mr. Haight. “It is a special place for me and many others, including families, and though it is remote we return to it year after year. I welcome the NCC playing a role with the municipality in making sure that the island is there in all its beauty for future generations to enjoy, and I encourage you to support the NCC’s project as the new custodians of over half of Cockburn Island.”

“We’ve had good conversations with the mayor an council and have started talking about a management plan, and a draft plan will be in the works in the next few months, with the input of the mayor and council and the community, as there seems to be a lot of community interest,” said Mr. Grant. “I will be on the island and be available in the summer and fall to talk to and get input from members of the community for our plan; we look forward to working with everyone in the community.”