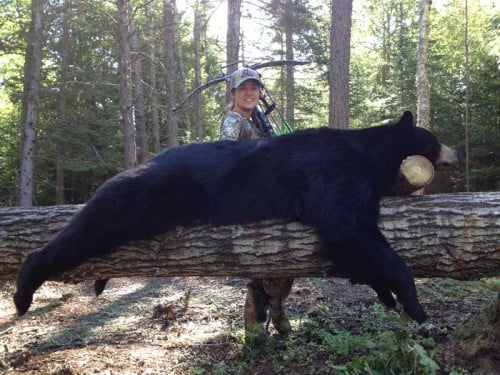 SILVER WATER—A 20-year-old woman has quite the trophy in the form of a 350 pound black bear after killing the animal during her very first bear hunt on Labour Day weekend. The bear had previously been a “nuisance bear” in the Silver Water area.

Laura Norrish, a third-year nursing student at York University and a summer resident of Manitoulin, visits her family cottage on Barrie Island each year and in fact, lived on Manitoulin this summer while working as a student at the Manitoulin Lodge in Gore Bay.

“I just kind of picked up the sport,” she said of bow hunting, noting that she’s been goose hunting near her southern Ontario home of Guelph.

“This was my first time with a crossbow,” Ms. Norrish admitted. “I started using it with a target and realized I was a better shotwith it.”

The young woman’s first hunt came on August 15, opening season for black bear. “It was my first time out ever and I was nervous and excited,” she said. “We sat in the deer stand for 2.5 hours, watching the red squirrels.” Ms. Norrish was hunting with her friend Nathan McPhee, who owns the property near Silver Water where the pair were patiently waiting.

The massive 350-pound bear wasn’t Ms. Norrish’s first kill, however, as she had also shot a bear on opening day, a smaller one that received a clean shot through the heart and lungs. As the bear was shot just before dusk, Ms. Norrish and Mr. McPhee were unable to go after the animal, having to wait until the following morning to track it. The sound of coyotes was not promising that night and Ms. Norrish said she guesses the bear was pushed deep into the woods as the next day it could not be found; just the arrow with the blood trail ending abruptly. (Because of the amount of fat on bears, they are able to coagulate their wounds quickly, so while the bear would have been fatally wounded, the bleeding would only have been internal after a short while, the nurse explained.)

Two weekends later, on September 1, the pair again went out on the hunt, setting up post in the same deer stand. “On Saturday we went in the evening and that’s when the bear came out,” she explained, noting that for two weeks they had been baiting the area. “We sat for three hours and could see the big, deep prints from the bear.” 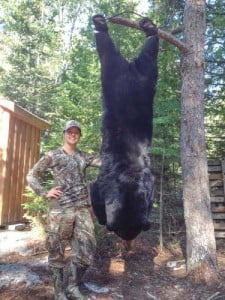 The giant bear had been the bane of Mr. McPhee’s existence for some time, ripping the door from his shed to get at a bag of Cheesies and rocking the young man and his dogs while they slept in the back of his truck. He had even filmed the nuisance bear getting into all sorts of trouble.

Suddenly, at Mr. McPhee’s prompting, Ms. Norrish looked to her left and there was the 350-pound beast, hiding behind a nearby cedar stand. The bear caught their scent and began to make its way away from the stand.

“For one split second he stopped and I got my hand on the trigger and I pulled,” she said. “My heart was pounding and I was pretty speechless.”

When this reporter asked if Ms. Norrish was now hooked on hunting, she replied emphatically, “I am!”

“A lot of my family are hunters,” she said, adding that she hopes to make it to Manitoulin for deer season, but doesn’t have a tag. “My uncle has invited me to go moose hunting, and I would really like to do that.”

When the hunter and her trophy arrived back in Guelph, the whole family was there to greet her with congratulations, she said. Having a butcher uncle and a family with a taste for wild game helps too, she said, adding that nothing will go to waste.

While Ms. Norrish does not yet know where she officially stands in the record books, she does figure she will make it to the top 10 in Ontario for black bear kills by a woman using a crossbow. Black bears are judged by their skull size and Ms. Norrish’s skull is two inches larger than the 14th place bear. The skull is currently in possession of the University of Guelph for examination.

While the young woman admitted to taking some ribbing from her friends in the veterinary technician program for killing a bear, she reiterated that nothing will have gone to waste, saying that fresh meat from nature is probably healthier than most of the food people are eating.

When asked about a bearskin rug, Ms. Norrish said perhaps not a rug, but a good portion of her wall will probably be taken up by her first trophy, claws and all.