STRATFORD/ALERT BAY—For weeks I’d emailed staff surrounding the new moderator of the United Church of Canada, the Right Rev. Dr. Carmen Lansdowne, for an interview. Finally, I was given a brief window. Last week when I was at a Shakespearean Festival play the moderator emailed me herself that the requested 40-minute timeslot would work.

Technical problems delayed our start. Carmen, as she asked to be called, was at her parents’ home in Alert Bay, on Cormorant Island north of Vancouver Island B.C., and had WIFI problems. I, more than 3,500 kilometres away in Stratford, Ont., couldn’t get my laptop camera functioning. Carmen tried to help but we resorted to my propped-up phone on video.

“Okay, let’s begin,” as we both laughed with relief.

“The salmon is very good this year and we people are excellent at preserving, canning and smoking it and I have to help my mom right after we talk,” Carmen explained to me.

Carmen, a lifelong member of the United Church is a member of the Heiltsuk First Nation and is the first Indigenous woman to lead a mainstream church in Canada. She was elected at the 44th General Council of the church and installed at a moving livestreamed worship service that I watched, held in Vancouver Aug. 7, 2022.

I asked Carmen if she thought her installation happened as a result of the resolutions from the 43rd General Council in Kamloops focusing on its “journey towards reconciliation and right relationship with the Indigenous communities.”

“I absolutely think gains have been made. Kamloops was a catalyst. That was when the non-Indigenous people took a step back and started to listen to the variety of experiences Indigenous people suffered across the country,” she stated.

“I have to take it, it’s my dad,” she said apologetically. I smiled.

“Dad was reminding me it was salmon night. I told him I knew,” and explained she’d be doing prep work for the salmon experts to do their magic.

I asked her about the Northeastern Ontario-focussed Canadian Shield Regional Council’s proposal which had been delivered to the 44th General Council and which arose from the 2018 case of a Toronto area minister, Rev. Greta Vosper, who “lost” her faith, declared this publicly, and was allowed to keep her job and the details of this agreement were sealed. Two Atlantic regional councils also submitted proposals on the same issue: Essential Agreement.

To quote the proposal: “We believe this is important in our shared mission to be one in Christ. Without clear guidelines and procedures, we do not have a way to seek reconciliation with those individuals or communities who are no longer in essential agreement…..This model of seeking unity, and parting in peace if not possible, is given to us by Jesus in Matt. 18:15-17.”

Little Current Pastoral Charge on Manitoulin Island helped initiate this national discussion that culminated in debate at the 44th General Council earlier this year. In a January 2019 letter to then-moderator Very Rev. Richard Bott, under the subhead “Why is this issue important?” Church Council chair Scott Mosher stated on behalf of the pastoral charge, “The Little Current Pastoral Charge…raised the question of unintended consequences that may arise from this confidential settlement. Could a local pragmatic settlement have country-wide precedent setting repercussions?”

Little Current Pastoral Charge first asked the moderator of the time whether, in light of the Vosper case, could the United Church grow and flourish? How to move forward with the congregation and promote the Gospel values? What to tell others about what the United Church believes in? And they wanted to ensure a path back for those regaining their faith.

“Doesn’t a minister enter into covenant with the congregation and God to uphold the main tenet through the teachings of Jesus, that He is the Christ, the Redeemer, the Divine?” I asked Carmen.

“I haven’t followed this closely yet. But it is so easy to prooftext,” she stated. (Proof-texting refers to finding any Biblical verse to prove your point.)

In the case of the Little Current Pastoral Charge’s proposal, the members agreed to a resolution being presented to the June 2019 initial meeting of the then-new Canadian Shield Regional Council where Mr. Mosher presented it to the delegates who then agreed to try and move it forward.

It was referred to the next meeting of the United Church’s national policy gathering, the 44th General Council, at that time three years away. This year, the Little Current Pastoral Charge/Canadian Shield Regional Council’s request for a policy clarification by the national church, together with two similar requests from the Atlantic Region, was considered at length by commissioners to the virtual General Council this spring/early summer and, with a failure to reach a policy consensus, the issue remains unresolved.)

“We don’t want to be policing the church but the issue is not asleep yet. There’s a lot of work to do yet,” Carmen continued, “we have limited resources but it doesn’t mean the work isn’t happening.”

She iterated the three foci of the United Church: anti-racism; to be a safe and inclusive church; and reconciliation.

We moved on to the recent visit to Canada by Pope Francis in July.

First, what he did say: his verbal apology made at Maskwacis, Alta., to all the Indigenous peoples who suffered, whose families continue to suffer, from the inhumane treatment at residential schools across Canada, including the nearby boys’ and girls’ schools of Spanish.

Carmen said the official United Church statement would not likely be issued until autumn. However, the United Church was the first church to apologize to Indigenous peoples, in 1986, she noted.

“Personally, it was never going to meet everyone’s needs. The Roman Catholic church has a lot of constraints. Let’s just say it was not perfect,” she remarked.

Pope Francis did not say anything about returning the plethora of clerical files held at the Vatican of the names and real homes of the thousands of Indigenous children taken, almost stolen, and placed in the nationwide residential schools primarily operated by the Roman Catholic Church. Neither did he renounce the Doctrine of Discovery through which so many sacred Indigenous items were seized and taken back to the Vatican museums. The 1493 Doctrine of Discovery also gave free rein to European colonizing nations to acquire lands and resources they “discovered” where the Indigenous inhabitants were not Christian.

“I think this is the part where there was a lot of hope but, theologically, it runs into troubles with the Roman Catholic Church believing it is infallible,” Carmen emphasized.

I segue here to insert a few comments concerning the Pope’s visit from an interview I did with Rev. Whitney Bruno, minister at the Little Current Pastoral Charge. She was one who helped me find a way to contact Carmen. (Rev. Bruno asked to be called Whitney.)

“I wish he (the Pope) had done tangible actions to make the words have meaning. There were (Catholic) churches supposed to contribute to reconciliation funds but did not, or gave less than what was promised. He could have given that money….It gives me hope but it hasn’t matured yet. But I have hope!” Whitney stressed.

Carmen and I then discussed the rate of decline in the brick-and-mortar standing church. There are currently 2,711 United Church churches across Canada. With the rate of one building closing per week, that gives the church, as we’ve known it, about 52 years. Does that worry the moderator?

“I’m from a generation that has not not seen a church in decline. Ministries are changing in Canada. Look at the Weird Church and Feast and Fallow in Vancouver. They’re working at building a ministry without a congregation, through social justice and food provision programs,” she thoughtfully said.

(As an aside, this writer has a background in religious studies. What the moderator describes harks back to the gatherings around Jesus wherever he journeyed. Sometimes he comforted, sometimes he fed and sometimes provided drink. Whatever was needed at the time.)

The moderator then brought up the loss of United Church presbyteries, discontinued at the 43rd General Council. A presbytery was a regular local gathering opportunity for ministers and congregational elders to talk, laugh, share common concerns or celebrations. Locally, Manitoulin’s United Churches were part of Sudbury Presbytery.

“The dominant church did a great disservice dissolving the presbyteries. We’ve eliminated that core,” Carmen explained the unintended consequences, which include the loss of collegial supports for ministers.

The moderator and I finished, by now a 50-minute talk, discussing the autonomy or restructuring of the approximately 58 Indigenous United Church churches in Canada. The 44th General Council had noted, “it’s time for us to move towards a different relationship. It is time to set aside the notion of ‘missions to the Indians’ and truly move towards being ‘partners in God’s call to all the earth.’

“The Haudenosaunee speak of the Two-Row Wampum. This covenant speaks of our two peoples traveling down a river, each in their own canoe. With respect, we need to allow one another to simply be who we are,” as recorded in notes by the National Indigenous Council at the General Council.

“We’ve supported the idea of self-determination. We have to be nimble,” Carmen remarked, adding, “Mom is waiting, so I must sign-off.”

Diane Sims lives in Stratford. She was the editor of The Manitoulin Expositor for three years in the mid-1980s prior to returning to school for a Master of Journalism degree. Because of her ongoing relationship with the paper and that her first university degree was in religious studies followed by course work that would lead to a Master of Theology degree, Ms. Sims was commissioned by The Expositor to interview the new moderator. 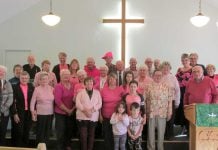 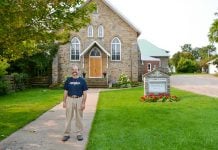