LITTLE CURRENT—When Little Current Legion volunteer Norris Valiquette went to his mailbox recently, the last thing he expected to see was a letter bearing an international stamp from Poland.

Inside the envelope was a letter bearing the signatures of six officers of a NATO force deployment to Poland stationed at a base just a few kilometres from the border of Ukraine.

“It is just a few miles away from where the Russians bombed that base near the border a couple of days ago,” said Mr. Valiquette.

The letter thanked Mr. Valiquette and members of the Legion for the Christmas cards the base received at Christmas, noting the messages from home provided a huge boost for those standing on guard so far from family and home.

“It was really nice to get this reply,” said Mr. Valiquette, who noted that Legion volunteer Linda Bowerman initiated the letter and card writing campaign a number of years ago. “You can see how much these letters mean to our servicepeople overseas,” he said.

While Christmas greetings and parcels are always welcome, those wishing to provide a boost to serving members of the Canadian Armed Forces (CAF) don’t have to wait on Jolly St. Nick. Letters from home can be sent any time of year.

“The thousands of Canadian Armed Forces members who are serving overseas appreciate receiving letters and cards from Canadians across the country,” notes an armed forces website. “This program is also very popular with schools, clubs, and other organizations from across Canada.”

Only letters or cards are acceptable for the program. Packages addressed to any CAF member are considered charitable goods, which are prohibited in the Canadian Forces Postal System.

You may choose a specific mission from the address list provided on the site, or you may address the letters/cards to one of the three locations listed there.

Find out more by going to www.canada.ca/en/department-national-defence/services/contact-us/write-troops.html. 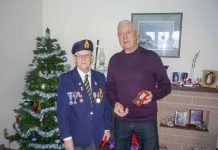 Little Current Legion acknowledges its many comrades and volunteers