MINDEMOYA – Each year, Ontario Nature hosts a count of the birds found in Ontario at Christmas time. The count usually contains a couple of surprises, especially on Manitoulin.

“The species count was average but was four fewer than last year,” noted Mr. Bell. “The birds were counted by 28 feeder watchers and 21 birders, all of whom had taken part in previous years. The species count of 46 was right on the average number for the past 48 years, but four below the 50 spotted last year. The 15-mile ‘count circle’ was divided into nine areas with a team in each. One team walked trails south of Big Lake and another group hiked the Lake Huron shoreline east of Providence Bay, carefully clambering over ice covered rocks.”

Like last year, there was less socializing during bird count than was the norm for the previous 46 years. “This was another COVID year,” Mr. Bell pointed out. “So the counters were not permitted indoors prior to the count or afterwards. The crews, wearing face masks, met in a very windy Mindemoya parking lot trying not to let the papers blow away. The potluck supper with the Manitoulin Nature Club did not happen.”

The most numerous birds sighted this year were 713 American Crows, a record high number according to Mr. Bell, with 570 American goldfinches, 402 Black-capped chickadees, 376 European starlings and 371 blue jays rounding out the bulk of the more common Island varieties.

Uncommon birds seen this year included two ring-billed gulls on Lake Manitou, a merlin, two northern shrikes and three golden-crowned kinglets. A Canada jay was reported by Therese Trainor at Dean Bay, 12 house sparrows were spotted at a new location on Blue Road near the Mindemoya River, reported by Milford George, a red-winged blackbird at the Charlie Cox feeder in M’Chigeeng and a brown creeper were found by Will Kershaw while on his Hare’s Creek hike. Mr. Bell cited these as “good finds.”

The bald eagle count of 31 was higher this year, continued Mr. Bell, but there was just a single snowy owl tallied during the count.

“The larger lakes and bays were wide open and some of the smaller lakes were still ice free on the day before the count,” said Mr. Bell. “But, by the morning of count day, the Canada goose, ring-necked duck and red-necked grebe had gone.”

The birders proved a hardy lot, as count day this year was -5° Celsius and windy, while the ground was mainly bare. “With the exception of purple finches and crossbills, all of the finches were seen this year,” said Mr. Bell. “Small flocks of finches were only seen briefly in flight and were difficult to identify. A single redwing and six common grackles were the only blackbirds. We had 10 tree sparrows and 13 dark-eyed juncos, but no unusual other sparrows this year.”

The Expositor expresses gratitude to compiler Chris Bell and the Island naturalists who brave the late December chill to include Manitoulin in the Ontario Nature annual Christmas Bird Count. 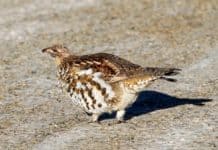 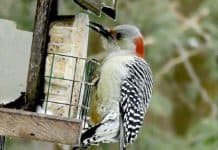 Over 2,400 birds of 50 species spotted at annual Christmas bird count