MANITOWANING—The Assiginack arena was filled with the happy murmur of friends and neighbours catching up on local happenings and the laughter of happy children, a sound too long absent from the hall over the past couple of years.

Assiginack Councillor Rob Maguire stood in for Mayor Dave Ham during the opening ceremonies, delivering remarks on his behalf. “These are Dave’s words,” Councillor Maguire assured the crowd.

“In the spirit of reconciliation, the Township of Assiginack acknowledges that we are gathered today on the customary and traditional lands of the Anishinaabe people of Mnidoo Mnising,” he began, before welcoming everyone to the 144th Manitowaning Fall Fair. “Council is so thrilled that we can finally gather again at such an important event that has brought the community together for decades.”

Councillor Maguire went on to note that the Ontario Association of Agricultural Societies represents more than 200 societies across the province and has a mandate which includes the running of annual fall fairs. “It is estimated that volunteers contributed 1.4 million hours to Ontario agricultural societies each year,” he said.

Councillor Maguire went on to inform the audience that “volunteers are the backbone of agricultural fairs and we are so fortunate to have such incredible volunteers in our community to make this happen. Your tireless hours of work do not go unnoticed. Thank you to everyone involved in the Manitowaning Fall Fair.”

“For all of you that entered the many different and unique categories, thank you,” continued Councillor Maguire on the mayor’s behalf. “Without you showcasing your talents there wouldn’t be much to the fair. It is so much fun to look through all the entries and see those that have the red ribbons on them.”

Councillor Maguire went on to note the annual Knox United Church pancake breakfast, parade, horse show and horse pull, as well as the many activities for youth and adults.

Among the many volunteers that help ensure the fall fair is a success each year is Hugh Moggy. Mr. Moggy has been participating in the fair since he was 12 years old. Now well into his 80s and having suffered some significant health challenges and losses this past year, Mr. Moggy still steps up to do what he can to help.

The Expositor caught up with Mr. Moggy at the 50/50 ticket table. “I asked them who was selling tickets,” he said with a grin. “That’s something I can do.”

Friday evening’s entertainment consisted of the musical stylings of Cole Hughson and George Williamson in the arena, while Saturday featured Elijah Manitowabi outside in the pavilion.

The arena was filled with thousands of exhibits from folks of all ages, including plants, crafts, vegetables and a well-accoutred silent auction table, as well as a number of vendors selling crafts. Manitoulin Streams was on hand with a minnow race that kept the kids hopping with excitement. 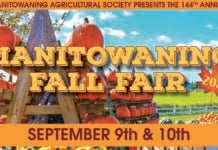 144th Manitowaning Fall Fair on this Friday and Saturday