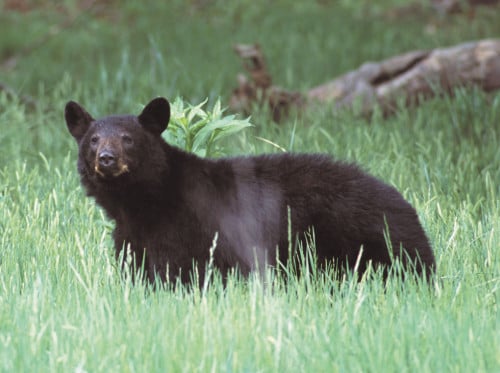 MANITOULIN—News of bears coming within close proximity of Island communities has been coming in over the past week, with sightings being reported most recently in both Little Current and Wikwemikong.

Officers with both the Ontario Provincial Police (OPP), Wikwemikong Tribal Police Service and United Chiefs and Councils of Manitoulin Anishnaabe Police all say that with the dry summer conditions leading to a possible lack of naturally sourced food and with summer drawing to a close and food sources becoming all the more important, it is not unusual to find bears finding their way into human territory.

Last Wednesday in Little Current, Low Island Park was closed to the public after a mother bear and two cubs were sighted.

Dave Williamson, Northeast Town CAO, explained that when town employees arrived at the park to investigate, everyone was asked to leave the premises. A dog had chased one of the cubs up a tree, the other cub was seen near the northernmost point while the mother was spotted near the Red Mill ruins, he noted. The town immediately notified the Ministry of Natural Resources and the OPP.

“We shut the park down for the balance of the day, and we shut the road down at Park and Water streets,” Mr. Williamson said. “Town staff alerted the marinas and emptied the trash bin at Spider Bay Marina right away (for fear of luring the bears in). That evening, the park stayed closed as well.”

At 6 am Thursday morning, town staff did two patrols of the park, searching for sign of the mother and cubs and, finding nothing, the park was re-opened. “We then patrolled the park on an hourly basis,” the CAO added.

Mr. Williamson said that upon the call to the MNR, the municipality was advised as to which steps and precautions to take, but was told that they should not expect to see MNR officers (this after the Ontario government’s spring cancellation of the bear trapping and relocation program).

“It may seem extreme to shut down the roads and park, but the main reason was to have a buffer between the bears and the people,” Mr. Williamson added.

According to the OPP and Mr. Williamson, the bears weren’t through with Low Island yet, with another sighting of bears Thursday evening. On Friday evening, police learned that the bears had returned once again to the park. Constable Allan Boyd, community services officer with the OPP, explained that when officers arrived at Low Island, the bears were seen heading for cover in nearby brush. The park was again closed.

Reports of the bears returning to the park came in again on Saturday, with the town again closing the park and town crews doing yet more patrols of the area. As of Monday, hourly patrols of Low Island were again taking place, with crews directed to clean up apples that had fallen from the park’s trees.

In Wikwemikong, police have received more calls this August then normal for the community, Constable Todd Fox of the Wikwemikong Tribal Police Service explained.

“Oh yeah, it’s higher than normal,” he said. “Garbage bins seem to be a draw, and dry conditions could be an issue.”

Constable Fox noted that most of the sightings come from houses located on perimeter streets in the community, ones that have bush areas nearby, and at night. One sighting came from a bear apparently looking for some of Eddy’s Restaurant’s famous grub, with the creature spotted in the parking lot off Wikwemikong Way.

The constable urged parents to always know where their children are when they are playing outside and, if possible, to limit outdoor play until the issue clears up. “Always err on the side of caution,” he said. “If your child is playing outside, know where they are.” While attacks are very rare, “there’s always a chance,” he added.

“Parents should have chats with their children that these bears are dangerous and that there should be no taunting,” Constable Fox continued. “They are a powerful animal and should be avoided at all costs.”

Wayne Osawamick, director of operations for Wikwemikong, told The Expositor that the band has hired a community member to live-trap and relocate the bears to the southern tip of the reserve. In the week that the trapping program was started, so far one bear has found itself a new home in the south, he said.

“There are two things affecting this increased presence: the scarcity of their natural food resources and the fact that they’re gearing up for the winter—they’re just doing what they normally do,” he said.

Mr. Osawamick said he hoped the people of Wikwemikong would not disturb the traps set out, noting that all residents have received a fact sheet in the mail about bears, what to do and what not to do should they encounter one and about what the community is trying to do.

Rendell McDonald, acting sergeant with the UCCM Anishnaabe Police and also an MNR ‘bear wise’ trained officer, said communities within his force’s jurisdiction have not been reporting bear sightings yet, but said he wouldn’t be surprised if they start soon enough.

If you see a bear, “don’t run, back away, look big and raise your arms above your head and make lots of noise,” the sergeant urged. “Aggressive bears are few and far between, but don’t ever take them for granted.” 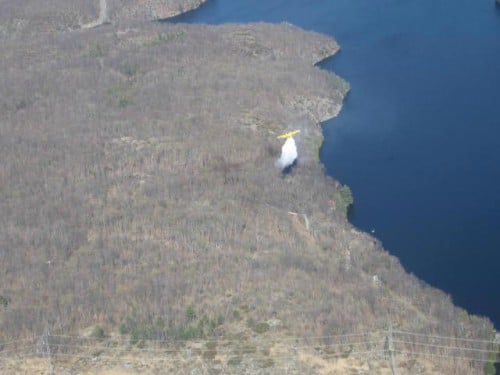