LITTLE CURRENT—A large crowd gathered in front of The Expositor Office on an overheated Canada Day to congratulate Island author Jennifer Farquhar on the publication of her first novel, Watermark.

Ms. Farquhar, who coincidentally was also celebrating her birthday that day (‘Happy Birthday’ was spontaneously sung in her honour) faced her group of friends and well-wishers as she comfortably and with good humour answered questions about her literary life posed by interviewer Bonnie Kogos, Manitoulin Island’s biggest booster and Sudbury Star ‘Window Seat’ columnist. Ms. Kogos is the author of two published novels, with a third in progress.

Ms. Farquhar now lives in Kitchener where she is an elementary school French teacher but, she told Ms. Kogos and the enthusiastic crowd, a great deal of her world view stems from growing up in Little Current and on the Island in the 1970s.

While the fictional island where most of her Watermark is set is modelled on Manitoulin Island, there are some distinct differences between her own experiences and those of her main protagonist. She told Ms. Kogos and the group that, unlike her principal character, she didn’t suffer from a dysfunctional family. In fact, she said, her family was eternally supportive. Ms. Farquhar’s father, Mike Farquhar, quipped that, “I’m not that alcoholic father in the book!”

In fact, in response to a question from Ms. Kogos about influences in her life, the author explained that her mentors had been her family. She noted that her father had led her to understand that if there was something that needed to be done, you just did it. She remembered him writing plays for church youth groups, building and mounting sets for plays at church, annually building new bulletin boards for her mother’s classrooms at Little Current Public School and even writing and performing fun songs for the Lions Club’s TV bingo project. 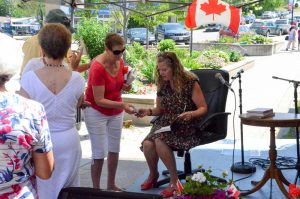 Ms. Kogos asked Ms. Farquhar about her interest in writing and when did it develop. She explained that, for as long as she can remember, she had written poems and short stories.

She recalled winning a Manitoulin Expositor short story contest and commented on the symmetry of being part of the launch of her first published book in front of the newspaper office at an event organized for her by The Expositor. But there were more aspects to this particular arc of writing and publication: on her fortieth birthday, four years ago on another July 1, she set out to write this book. Her thinking then had been, she explained, that she was now 40 and that if she was going to start writing seriously, she had better get going and so, with her husband taking charge of their children that day (two at that time, and, since then, another child has been added to the family) she explained that she sat herself down, wrote ‘Chapter One’ at the top of a blank page and carried on until she had written 1,000 words. That was the beginning of Watermark: a birthday gift to herself.

The author told Ms. Kogos that, after that, it became a matter of self-discipline to write at least five days every week and to produce that thousand words at every one of the writing days.

And the work continues: in response to a question during the Q and A session, Ms. Farquhar explained that she has another completed manuscript and is working on a third novel.

Ms. Kogos posed a question about the journey the novel took, from idea to publication, and also asked whether there were setbacks along the way.

Ms. Farquhar explained that the book had, in fact, taken a circuitous route to this four-year anniversary of her writing ‘Chapter One’ at the top of a blank page.

She explained that she had made jot notes over the years, had idea for plots and then began to make use of them. Some were useful, others not so much, but eventually she had a manuscript.

She explained that her next step was to find a literary agent who might take her on and support the book through to publication, “and I was fortunate to become a client of one of the best literary agents in Canada.”

That led to talk of moving the book from its Northern Ontario setting to one in the US in order to capitalize on the much larger market south of the border. Ms. Farquhar explained that, reluctantly, she moved the setting south, “but not too far, still on Lake Huron, to an island setting only about 100 kilometers south of the Canada-US border. The ‘big city’ in the novel was also relocated from Toronto to Chicago and then there was the accompanying re-writing to accommodate a US setting, even one relatively close to the border.

“I had to go through the book and change all those words that we spell with an ‘ou’ to just have the ‘o’, (harbour/harbor).”

But when she found her publisher, Latitude 46 Publishing in Sudbury, the novel came back full circle (complete with the double-vowel spellings!)

But it wasn’t that simple then, either, Ms. Farquhar recalled. She had, in fact, to re-write many of the ‘Manitoulin’ passages. “It wasn’t as simple as changing the locations of scenes written for the US draft.”

Ms. Farquhar had noted that an important part of her growing up experience on Manitoulin was the understanding that the Island is a place of two cultures and this is also a vital element in the island setting of Watermark.

She explained that many of the readers who were asked to critique the manuscript pre-publication were First Nations people knowledgeable in the Anishinaabek culture and that she used their advice and suggestions in the novel’s final draft.

Ms. Kogos, who has published two novels (‘I was Mistaken for a Rich, Ripe, Red Tomato’ and ‘Manhattan/Manitoulin’) and Ms. Farquhar publicly traded anecdotes about the editing process.

“Doesn’t it drive you crazy when they tell you some of your ‘Darlings’ (special scenes, characters) have to go?” Ms. Kogos asked.

Ms. Farquhar agreed, noting that a fair number of her own ‘Darlings’ had been reluctantly discarded. Ms. Kogos said that, in her experience, the only thing to do was to make the changes and then get busy with cooking, vacuuming or shopping for a while and then get back to work.

Ms. Kogos was clearly impressed that Ms. Farquhar has a published novel, a husband, three young children, a career as a teacher and looks as fresh as she did the day of the Sunday launch.

“You wouldn’t say that if you saw me writing in the morning in my pyjamas,” Ms. Farquhar quipped, but went on to say that her family is supportive of her writing and that her teaching load with her school board is half-time. She’s currently on maternity leave.

“My writing is done in the mornings. In the afternoon, its revisions.”

Heather Campbell, a partner in Latitude 46 Publishing who attended the Canada Day launch, told The Expositor that she has a strong feeling that Jennifer Farquhar is just at the beginning of an important writing career.

Ms. Farquhar received personal congratulations from old friends who had travelled from as far away as Ottawa to attend the event and from people, like her Grade 1 teacher, who lives just down the road.

Signed copies of Watermark are for sale at Print Shop Books at the Expositor Office in Little Current.