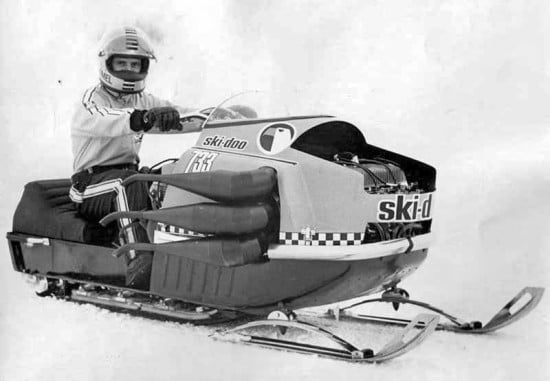 Kudos to The Expositor for the excellent article in the February 20, 2013 edition (page 7) about Sabrina Blanchet, the teenage superstar of snowmobile racing.

Having attended all of the Manitoulin Pro Challenge races these past three winters, I am amazed at the performance of this girl who is talented well beyond her years. While Sabrina comes from Quebec, where snowmobile racing is almost a national sport, I’ve always suspected there might be a good mentor lurking in the background.

Aahaa! It turns out that Ms. Blanchet is the granddaughter of one of the great Quebec snowmobile racing legends, Gaston Ferland. Her grandfather was one of my heroes a long time ago when—true to my Manitoulin roots—I was once accused as a teenager of having more high octane gas in my veins than blood.

For the record, Gaston Ferland was a big name in the golden age of North American snowmobile racing during the late sixties and early seventies. Together with Lucian Lamoreux and the great Yvon Duhamel, Ferland was a member of the now historic Ski-Doo factory racing team, known back then as “L’Equipe Can-Am Bombardier.” For all you guys who flunked out of French class back in high school, you can now translate that on the Internet.

This was an era when the snowmobile manufacturers were convinced that racing was the best form of advertising they could find to showcase their wares. “Win on Sunday, Sell on Monday,” was the battle cry of the industry. In their endless quest to win races and increase market share, the major manufacturers—Polaris, Ski-Doo, Arctic Cat, and Yamaha—went around the country writing out cheques that would put the Pentagon to shame.

Numerous prestige competitions were held all across the North American snowbelt during those halcyon days, both in Canada and the US. In the winter of 1969-70 Sabrina’s grandfather, Gaston Ferland, became the first man to break the 100 mph mark (161 kph in Canadian-speak) on a snowmobile during a land speed run at West Yellowstone, out in Montana. This was no small feat given the limited technology of the day. Unfortunately for Gaston, the rest of his land speed record was destined to be short lived. Some smart aleck from the Polaris factory team put his sled down through the timing lights a fraction of a second faster, later that same afternoon.

Sabrina Blanchet’s grandfather took part in what is widely accepted as being the greatest snowmobile race of all time. Yvon Duhamel on a Ski-Doo faced off against Mike Trapp on a Yamaha in the world championship race at Eagle River, Wisconsin in January 1971. It was a true ‘David and Goliath’ showdown. Duhamel had an 800 cc fire breathing dragon, but it was known for being an ill-handling beast. He was up against Trapp’s lowly 440 cc sled. The Yamaha, however, was a lighter and far better handling machine. The Yamaha technicians had also tuned their sled’s engine to run on a witch’s brew of almost pure alcohol fuel.

In the 15 lap final, the two gladiators went toe to toe, changing the lead position no less than 17 times during the race. Back in the pack was Gaston Ferland with the other ‘big guns’ of that era. On the last lap, Duhamel out dragged Trapp down the back straight to regain the lead. But in a ‘do or die’ banzai move to take the checkered flag, the Ski-Doo driver carried too much speed into the last corner and wiped out. Trapp cruised home to victory for Yamaha’s first ever world championship. There was a new kid on the block.

Bombardier used the off season—not to mention the big company’s almost bottomless bank account—to create a new batch of state of the art racing sleds for the coming 1972 season. With these machines, Gaston Ferland and Yvon Duhamel were almost unbeatable. They plundered the North American heartland that winter, winning race after race—except one.

Bombardier adopted a new strategy in the off season after Yvon Duhamel had to settle for a close second place to Mike Trapp’s first place finish on a Yamaha—yet again—at the Eagle River world championship race in January 1972. Putting a new twist on the old saying, “If you can’t beat ‘em, join ‘em,” Ski-Doo lured Mike Trapp away from Yamaha. They resorted to that time honoured trick in professional sports that leads so many good men into biblical-like temptation. Trapp was offered a whole whack of money, and then signed up to a big fat multi-year contract. Now what man can resist that?

With Mike Trapp now part of the team, the writing was on the wall. Lucian Lamoreux was dropped, and Gaston Ferland became third man on the totem pole. Then came the Yom Kippur war, and the first energy crisis of late 1973. For corporate reasons, Ski-Doo opted to sit out the coming season, while its world class team of drivers were forced to watch from the sidelines. Neither Gaston Ferland, nor L’Equipe Can-Am Bombardier, ever quite regained their former glory.

Most of what I’ve told you here about Sabrina Blanchet’s grandfather, Gaston Ferland, and the era he competed in, comes from the retentiveness of a young man’s memory, now sadly faded by the years. For those who insist on greater historical accuracy on this interesting subject, have a look at Bill Vint’s excellent book, “Warriors of Winter: The Untold History of Snowmobile Racing.”

Sabrina Blanchet’s chosen sport has a rich heritage. In the years to come, I’m confident she will make her own great contribution to that. After all, she’s just getting started.