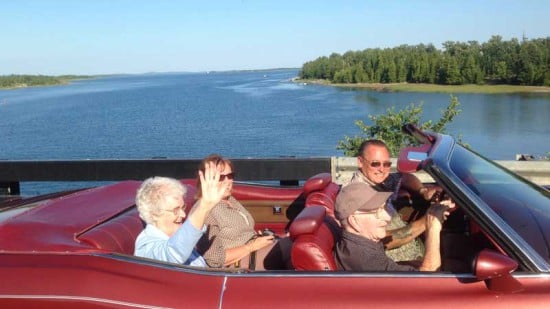 LITTLE CURRENT—The Bridgefest celebrations in Little Current honouring the centenary of Manitoulin Island’s most iconic symbol, the swing bridge connecting Little Current to the mainland across the North Channel, were a jam-packed weekend blessed with bright summer sun that shone down from a brilliant blue sky.

Northeast Town Mayor Al MacNevin began the opening ceremonies for Bridgefest 2013 by acknowledging the sponsors of the community event, thanking the Trillium Foundation for its $25,000 grant and the Canadian Heritage Fund for its contribution of a grant of $24,200. The mayor also noted that his own municipality donated over $15,000 toward Bridgefest.

“We are proud to host this event on our waterfront, with a view of the channel and the bridge,” the mayor said, encouraging all in attendance to walk the linear waterfront trail which runs from the newly named Bridge Park (located beside the Manitoulin Welcome Centre) to Low Island Park.

Algoma-Manitoulin-Kapuskasing MP Carol Hughes commented that she had enjoyed reading the Swing Bridge Stories published throughout the year leading up to Bridgefest in the pages of this newspaper, adding that the stories helped to highlight the differences the bridge and time have made in the Manitoulin community.

“I congratulate all those who ensured the bridge would be celebrated,” Ms. Hughes concluded before passing the microphone on to her provincial counterpart, Algoma-Manitoulin MPP Michael Mantha.

“This is going to be one heck of a fabulous weekend,” he said. “It’s really great to gather here to celebrate.”

“Whether the bridge or the Chi-Cheemaun, both vital arteries, we need to keep making these investments,” the MPP said of the funding both have received for maintenance over the past few years.

The MP and MPP then made a special presentation to Mayor MacNevin (on behalf of the swing bridge), marking the iconic gateway’s 100th anniversary.

Arik Theijsmeijer spoke on behalf of FedNor, bringing greetings on behalf of Minister Tony Clement, who said, “The community should be very proud.”

Angela Becks completed the podium remarks from visiting dignitaries prior to the celebration kick-off and was there as a member of the Trillium Foundation grant review team.

“One hundred years is not easy and yet our iconic bridge continues to connect our communities,” she said. “The Trillium Foundation’s donation of $25,000 ensures we will have a swinging party in its honour,” Ms. Becks added, calling for everyone to take part in the many Bridgefest events planned for the weekend.

Mayor MacNevin concluded the opening ceremonies by thanking his fellow Manitoulin reeves, mayors and chiefs who were also in attendance, noting that the bridge belonged to all of Manitoulin and not just Little Current, also thanking the Bridgefest committee and the members of his council.

Events over Bridgefest Weekend took place by land, sea and air. In the air there was a fly-over of the bridge and channel by a pair of Second World War Harvard trainers and a daylong series of flights by pilots taking part in the Young Eagles program.

Four planes and 65 kids aged 8 to 17 took part in the Young Eagles event on Saturday (which also marked the airport’s 25th anniversary). The Young Eagles program seeks to instill a love of flying in a new and younger generation, with experienced pilots from across the province coming to Manitoulin East Municipal Airport each year. Local grocer GG’s Foodland donated the barbecue goodies that were waiting for the kids to enjoy after they returned to earth.

The two Harvard aircraft were also on display before their 3 pm swing bridge flyover.

Aurora Ominika-Enosse, 13, of Wikwemikong had her first ever Young Eagles flight on Saturday.

“I flew over Little Current,” she explained. “At times it was bumpy, but it was really fun,” she beamed.

“I got to fly at one time and it was terrific—it’s the highlight of the summer so far,” Aurora added enthusiastically. “I was terrified, but I loved it. When you’re flying in the air, everything looks so different.”

Aurora concluded that she would definitely be back for the next Young Eagles event at the Manitoulin East Airport.

A flotilla of tugboats of all shapes, sizes and vintages docked in Little Current for a Tugboat Rendezvous over the weekend before taking part in a stately flotilla waltz in the channel before the bridge. Among the vessels taking part was the enormous MV Prescotont, a 110-foot former CPR tug that began its career in 1930. The Prescontont was the first diesel electric built in Canada, completed in a remarkable 90-day turnaround. Based in Midland, the vessel can be thought of as the queen of the Bridgefest flotilla. But she did have some competition, including a rebuilt Ontario Hydro tug (formerly the Nanabush) that plied the waters around Manitoulin for many years.

On land, the Rainbow Country Cruisers car club paraded across the bridge, led by Andy Watson, the first person to drive a commercial truck across the swing bridge when the bridge was first opened to traffic in 1944. Following a cruise through the community, the cavalcade of classic and vintage automobiles, including a camo-clad 1945 military truck, lined up along the eastern edge of Water Street for the edification of autophiles and casual onlookers alike.

“I was really glad it turned out so well,” said organizer Carmen Ferguson. “We had around 43 cars come out. A lot of people thought we would be lucky to get 20.”

Early rising runners were out in force on Saturday morning for a five-kilometre fun run beginning and ending at the new Manitoulin Hotel and travelling through the streets of Little Current.

The Little Current United Church were selling a great assortment of delicious pies and if pie wasn’t to taste, there were plenty of food vendors out for a main street festival.

Volunteer Bryson Leshkiw, 14, manned the Chalk’n the Channel sidewalk chalk drawing competition on the downtown sidewalks by the post office, doling out ice cream certificates and Bridgefest caps to the talented winners.

Geocaching is all the rage these days and Bridgefest participants got an opportunity to learn more about the pastime during a Saturday event at Low Island. Meanwhile, downtown, a scavenger hunt was being set up, where family teams fanned out across the community seeking the items to be found on the game sheets.

In a moment that will last a lifetime, Tammy Gordon-Bryan wed Luke Walsh in a ceremony held at Bridge Park. The location for the wedding was particular apropos as the couple first met when Mr. Walsh came to work on the swing bridge three years ago to repair the road decking. Mr. Walsh also worked on the crew that sandblasted the bridge last year and gave the venerable structure its shiny new coat of paint.

“We first met at a house party and wound up going out on a Friday night for karoake,” recalled Ms. Walsh. “From there we just kind of hit it off.”

So the couple decided that Bridge Park was just the place to tie the knot since it was literally the swing bridge that first brought the couple together. “We were originally going to have the ceremony down by the water,” she said. “But there are a few folks in my family that would have had trouble getting back up the hill. So we just decided to have the whole thing at the top of the park by the welcome centre.”

The coincidence of the wedding with Bridgefest was just that, however, said the bride. “We picked the date long before the dates for Bridgefest were announced.” Some times the stars are just fated to align.

Providing popular entertainment for the Sunday family picnic was Jonathan Seglins and his circus-themed juggling, stilt-walking and magic performances for young and old alike, while Doug Hore and friends in the Anytime band played a series of old-time favourites. Following the Anytime crew were the Hawberry Hoedowners, with a alamain left and a dosey-doe, square dancing up quite a storm under the guidance of caller Fred Hunter.

Out by the water, By Path or By Paddle was setting up for kayak and heritage canoe demonstrations, including a pair of brightly decorated giant freighter canoes.

Meanwhile, over by the swimming docks, a water sports show by Canada’s premier water ski and water board exhibition team Summer Water Sports Inc. were wowing the crowd with their gravity and water defying water borne antics.

As Sunday afternoon drew to a close and an end to the official Bridgefest Weekend events saw weary volunteers and staff packing up, Mayor Al MacNevin drew the winning ticket in the Bridgefest postcard contest that included a nights stay at the new Manitoulin Hotel along with a huge pile of Manitoulin goods and products. The lucky winner was Heather Beecroft of Little Current.

The other winner of a coveted prize over the weekend was Don Spraggett of Sudbury (an Island ex-pat with a summer home in Bay Estates), who won the opportunity for a prime vantage point view atop the swing bridge control room with his family.

“This has been a wonderful weekend,” said Northeast Town staff organizer Heidi Burnett. “All of the entertainers have really given us a lot more than what we contracted.” Ms. Burnett was particularly effusive in her praise for the Amazing Circus Jonathan (Seglins).

“It really was a great weekend,” agreed a weary Mayor MacNevin as he helped pack up the picnic paraphernalia and children’s games. “Everybody really did a great job. All the volunteers and staff, everybody, they all gave it 110 percent to make this weekend a great time for everybody.”