MINDEMOYA—The smiles, hugs and welcomes of seeing friends that they haven’t seen in a year were infectious as members of the Brothers of the Blade Motorcycle Club gathered for their annual Penny Run.

“It is really good to see you,” said a big burly member of the Brothers of the Blade Motorcycle Club as he helps one of the clients of Community Living Manitoulin (CLM) off a bus at the start of the annual Penny Run celebrations held at Timberlane Rustic Lodge this past Saturday.

“I don’t know who has more fun, our friends (Community Living clients from Manitoulin and Espanola) or our club,” a member of the Brothers of the Blade Motorcycle Club told The Recorder.

“I would like to welcome everyone to the 27th annual Manitoulin Penny Run,” stated organizer Bruce Arrowsmith, of the Brothers of the Blade. “But first off I would like to thank our brothers and sisters from Ohio (and West Virginia) who have been coming here every year for the past 27 years. We wouldn’t be able to hold this day and event without you. Thank you so much for coming.”

“Twenty-eight years ago today, three of us made our way up to the Island and stayed with my parents (Bill and Marian),” said Mr. Arrowsmith. “My sister Arlie was involved in the Manitoulin Island association and my parents, along with others, were involved in the W.I.S.H. (Working in Support of the Handicapped) group to raise as much money as they could to help out. The population on the Island is not the biggest base to draw from and so my parents and others were putting donation jars out in stores and made gifts to sell to raise money as well. We saw what was going on and the struggles of the Hope Farm in providing everything the clients needed.”

“So myself and other friends went to members of our club for help in the form of donating pennies to help out,” said Mr. Arrowsmith. “Altogether we were able to come up with 40 pounds of pennies and one of the guys who had visited the Island brought the pennies back on the Chi-Cheemaun ferry in Tobermory, presented them to the captain of the ferry with the note, “Pennies from Heaven,” to give to my parents. The following week we decided to put on the first Penny Run, which we held 27 years ago.”

Mr. Arrowsmith recalled the first year of the Penny Run there were about “50 of us. There are still people from the first run that come back every year. Thank you guys. It has been a fabulous journey. The guys in the south talk about this event all winter. Every year I get in touch with the (Community Living Manitoulin) group on Manitoulin and Espanola as to what their wish is each year. Mr. Arrowsmith explained this year the CLE sent a fairly lengthy list. “We donated $3,900 on behalf of the Brothers of the Blade. Likewise, Community Living Manitoulin (CLM) sends us a wish list,” said Mr. Arrowsmith. “Their wish this year was a little unusual, it was for stand-up freezers for all their homes,” he said, noting that the group donated $5,100 to CLM.

“I would just like to say on behalf of CLM that we are very appreciative of this donation,” stated Wendy Friesan. “Our clients, staff and management also appreciate the day you put on every year for clients. What we try to achieve in 365 days you do in one day. Applause goes to all of you.”
As Community Living clients arrived at Timberlane Lodge the bikers handed them gold medals with the event name and date on it as a keepsake for the clients. After this the games begin, with probably the highlight of the day, as it is every year, being when the bikers take the clients on a ride on their motorcycles.

After that there are games like the egg race, weenie bite and the potato hunt. It is fun for everyone, judging by the laughter, smiles and comments of everyone.

Timberlane Lodge then provides a fantastic lunch for everyone to enjoy, followed by the awards ceremony, where winners in each game category were presented with plaques. John Dalton, of the Brothers of the Blade said, “thanks so much to everyone for coming out today.”’ He then called for someone to come forward to have their head shaved, with donations made, to raise money. CLM client Paul, with Mr. Dalton doing the hair cutting, led to $350 being raised.

“Just as this is an important day for all of you, it is as important to us as well,” said Mr. Arrowsmith. He noted, “we do a lot of fundraising during the year and it is a real honour to help out. Over the past 27 years we’ve raised over half a million dollars to help out.” 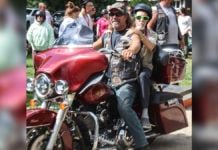