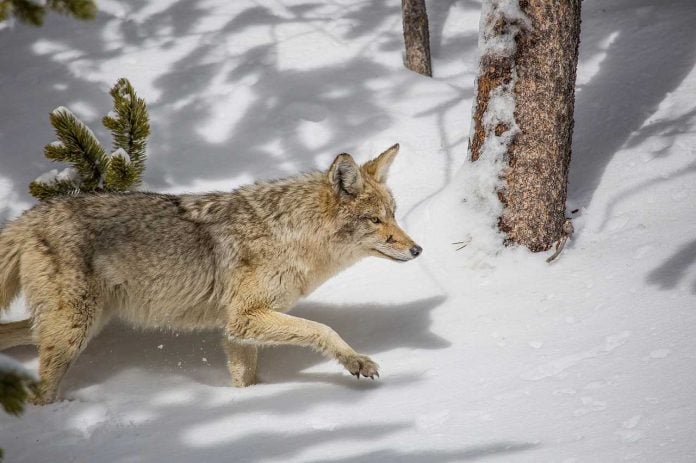 EVANSVILLE—Burpee-Mills Township council plans to discuss and explore options for the reinstatement of a coyote bounty bylaw within municipal boundaries with the recent influx of coyotes harassing and killing local farmers’ livestock.

“We have one farmer who has had to shoot eight wolves within one week who were out harassing and trying to get his cattle on his farm,” stated Burpee-Mills Reeve Ken Noland, who also told the Recorder that just this past Saturday a coyote “killed one of my livestock-a calf.”

Reeve Noland explained that originally there had been a wolf bounty in place through the province that provided $25 per livestock animal killed by a predator. Municipalities had a similar bounty in place for chickens and other animals they owned. However, municipalities then received flak for having the bounties in place and the Ministry of Natural Resources cancelled the bounty program. So, municipalities on Manitoulin Island banded together to have a bounty system in place ($75 per animal) through the Manitoulin Municipal Association. It was at this time that the province came forward and said if the local municipalities cancelled the bounty program they would provide a livestock compensation program.

However, “the compensation forms have changed-the paperwork is excessive and we have seen more farmers’ claims being refused. When a farmer loses livestock to coyotes, the carcass of say a calf needs to be provided when a ministry livestock evaluator comes out to investigate the claim. But as in the case of many livestock kills, there is no carcass left after the kill, so the farmers receive no payout.”

“And when compensation is provided, and it has decreased over the years, it is far less than what the farmer has put out in costs in raising the animal,” stated Reeve Noland.

Reeve Noland said, “I lost a six-week-old calf to a coyote kill last Saturday. There were actually two coyotes at my livestock and I was able to shoot one of them. They (coyotes) brought the calf down and started eating its hind-quarters when it is still alive.”

“Lyle Honess (also a farmer and a township councillor) shot eight coyotes at his farm, as they were in amongst his cattle,” said Reeve Noland.

“Yes, the issue of bringing back the bounty or some type of compensation program will be brought forward by council. We want to reinstate some type of program, through the municipality, to provide some reimbursement-aid to farmers for their livestock losses,” continued Reeve Noland. “This will be a municipal initiative. We’re going to look at what the municipality needs to reinstate the bounty program-compensation program for farmers.”

“Yes, there is certainly a problem here with coyotes and taking of livestock,” said Reeve Noland. He said the province compensates for a calf lost, but only if it weighs a certain weight, around 200 pounds. “Meanwhile, a farmer has probably spent $2,000 to feed the calf all winter, and they end up with nothing for it, when it is killed.”

“Most of the problems that are being caused are due to what appears to be the coyote population having increased again, similar to the deer population,” said Mr. Anderson. He pointed out the population of snowshoe rabbits on the Island has also gone up.

Mr. Anderson said it is very unlikely that the Island will see a decrease in the number of livestock killed by coyotes in the near future. “I suspect we see more of this, which is concerning especially if you are a local farmer.”