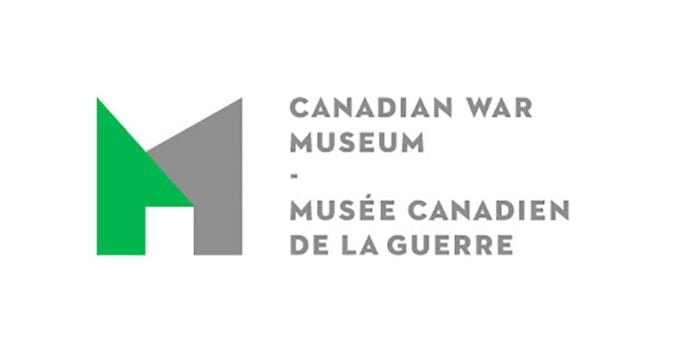 GORE BAY—Grade 4/5 students at Charles C. McLean sure know their stuff when it comes to World War One artifacts!

This became abundantly clear when the class hosted a ‘talking museum’ event in the school library May 10. Each of the students provided information on a World War One artifact they had chosen to learn about. The artifacts had loaned to the class from the Canadian War Museum discovery box program.

“It was a lot of fun learning about puttees; what they are exactly, how to put them on properly and how they were used by soldiers in World War One,” stated Luke Heinen. He explained puttees are strips of wool cloth worn by Canadian soldiers and other members of the British Forces during WWI that were worn around a soldier’s leg from the ankle to the knee to help protect, support and strengthen the lower leg.

“If you put them on too tight and they weren’t taken off, a soldier could end up with trench foot and you would probably lose your foot,” said Mr. Heinen.

Eli Lock provided the information on posters from WWI, “that were written in English and French. They basically encouraged  people to join the army,” and fight in the war.

Colton Chevrette talked about trench art, and the “fearless” artists, displaying a large vase made out of a shell casing and a variety of war related materials that was decorated and kept as a piece of art.

Hailey Ferguson displayed a nursing sister’s apron, a garment that Canadian nurses wore to protect their uniforms from getting dirty during the war. She also noted that 50 Canadian nurses died in WWI.

One of the three original items from WWI was a small arms brass ammunition cartridge case (and ammunition) that Patrick McCann described. He pointed out the cartridge was found on the battlefield in Belgium.

An original WWI shrapnel bullet was displayed by Jamison McQuarrie, who explained, “Canada supplied one-third of all shrapnel bullets in the war,” he told the Recorder. “Dozens of these small shrapnel projectiles made of lead were packed into artillery shells during the war. When fired they would kill or seriously injure any soldier or horse they hit.”

The third original item on display was barbed wire. Taylor Bell explained the barbwire was a fencing material with sharp twisted points and edges. During the war it was used as a battlefield obstacle to keep enemy soldiers from reaching your trench. “There are still some people in France and Belgium who are finding barbed wire on their fields and farms.”

The students also displayed WWI Canadian maps to help plan and execute battles, and Semaphore flags  used to send messages during the war.

Kowan Orford had a display of a trench periscope. “They were used by soldiers so they didn’t have to peak out from the trenches, but sometimes the enemy would try and snipe the mirror out of them,” he told the Recorder.

Making a lot of noise when he showed how his military artifact worked, Malachi Joseph had a gas alarm rattle. “It is a hand operated noise maker used by Canadian and British soldiers to alert soldiers that poisonous gas was coming and they should put on their gas masks.”

And a small box respirator (gas mask) was for Avery Nodecker to display and describe. “It is made of metal, leather, plastic and glass, and there is a black box on it that acts as a filter. There is a nose piece and mouth piece,” he explained.

The small box respirator was used by Canada and British forces during poisonous gas attacks.

Ms. Jefkins explained, “we have been fortunate to have the artifact items for 10 days. And the students have done a great job in sharing and explaining their artifact, what they are made of and were used for. They learned in their reading unit about the war, but it is another thing to actually see something like a puttee to get an even better understanding.” 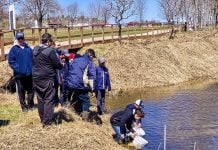 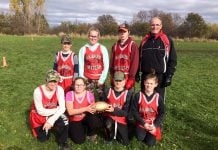 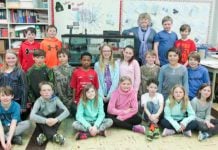 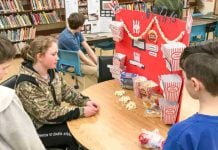 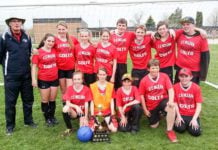 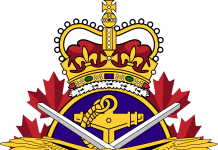