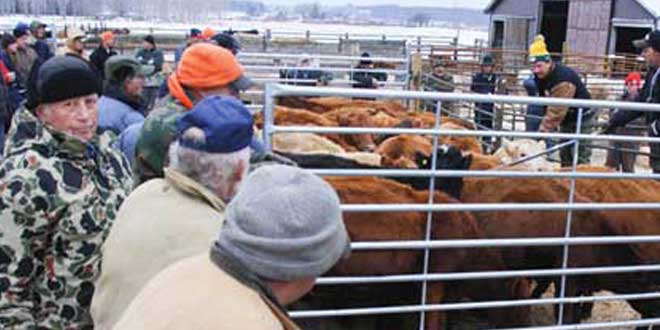 SPRING BAY—For more than a decade, the annual general meeting of the Manitoulin Cattleman’s Association (MCA) has generally taken place against a background of dismal market news, but this year the meeting is taking place in a different environment, cattle prices are ascendant and the outlook across the entire agricultural sector is generally looking good.

“They are talking about the next 25 years being the best for agricultural land,” said MCA President John McNaughton. But the flip side of that coin is that the entry bar for young farmers to enter the industry is rapidly rising out of reach.

To counter this trend the Ontario Federation of Agriculture (OFA) has been working on a number of initiatives to assist young farmers in starting up their own farm operations, noted OFA Field Services Representative Neil Tarlton. Among those initiatives is the courting of equity lenders who are willing to provide funds for an equity position in the startup operation. “The agreements run for 10 years,” he noted. After that, the new farmer should be in a position to replace the original lender with another private financing option from more traditional lenders.

The MCA roster of speakers for their AGM included an impressive lineup who brought with them informative brochures and pamphlets and who provided reports on the state of agriculture across the nation.

Reports were also received from the Manitoulin Island Community Abbatoir (MICA), MCA representatives to provincial and national farm organizations and the president.

The delegates to the DFO AGM include Mr. Noland as an automatic representative, with Mr. Martin as alternate, and Dean Millsap and Brent Best.

Ms. Scott highlighted a number of workshops on programs and webinars that will be available over the course of the next year, including Growing Your Farm Profits (to be held March 31 and April 7 in Mindemoya) and Environmental Farm Plan March 2 and 9, also in Mindemoya. Other workshop dates will be announced for ‘Biosecurity’ and ‘Food Safety.’ The deadline for Maximizing Your Traceability Investment in Mindemoya on January 19 has already passed. Ms. Scott advised those interested in the workshops to contact her prior to the event. “Don’t just show up,” she said, advising that the workshops will not go forward if there are insufficient registrants. Registration is easy by going to ontariosoilcrop.org or by simply phoning her at her office 705-561-6415 or emailing her at Mary.Scott@ontariosoilcrop.org.

There will once again be an information day, held this year on February 25 and sponsored by the BMO Bank of Montreal, noted Mr. McNaughton, again at the Spring Bay Hall.

Mr. Potter, OMAFRA livestock specialist, presented an interesting seminar on a gentle approach to the weaning of calves. He noted that there is a strong impetus for those raising cattle to ease calves into weaning from their mothers, in addition to reducing the bawling that is often associated with the process.

An interesting item presented were the results of an OMAFRA study on nose flaps, one of the weaning methods that has proved successful. There were 213 calves weaned in the trial, 76 calves had nose flaps and 64 percent (137) were on a fence line. Of the 20 calves fitted with the anti-sucking device there was no bawling and no fuss, but one of the calves without a device went through a three strand electric fence to reunite with his mother.

The nose flaps block a calf’s access to its mother’s teats, effectively preventing suckling, but the calf can continue to graze, drink, groom and socialize with its mother. The device remains on the calf for four to seven days. Unfortunately, extremely cold weather is somewhat problematic for the plastic devices, particularly with ice buildup on the calf’s nostrils.

When they can be used, the benefits of anti-weaning devices are substantial. Calves spend 25 percent more time eating, bawling is reduced by 80 percent and walking is reduced by 85 percent. Traditional weaning sees some calves walk over 40 kilometres in anxiety for their mothers, whereas the two-step method results in only 15.5 kilometres of travel. That equates to roughly the same amount as calves spend walking with their mother pre-weaning.

With alternate stress relieving methods, a trainer (cull) cow is placed with the calves (this has shown limited benefit), and while the fence line separation method does reduce walking and bawling is reduced, there is considerable fence stress as calves attempt to reunite with their mothers.

The MICA report noted that there has been considerable success with a program to market local meat products, particularly to Andy’s in Wikwemikong.

Lobbying efforts on behalf of the cattlemen include pressing the Municipal Property Assessment Corporation to lower the tax burden on abattoirs with representations to the Ministry of Finance, noted Mr. Tarlton. The OFA is also highlighting the impact that burgeoning numbers of sandhill cranes are having on grain farmers and seeking a hunting season on the birds.

“Last time I tried to talk to the MNR they were still telling me that sandhill cranes don’t eat agricultural crops,” said Mr. McNaughton. “I am glad to see it is being recognized.”

Farmers were encouraged to attend the annual Manitoulin deer management meetings held by the Ministry of Natural Resources and Forestry (MNRF). Currently, it was noted, the meeting is dominated by hunters by a factor of around 20 to one, and the results of those meetings, particularly in regards to deer tag limits issued by the MNRF reflects that imbalance.

Currently, Ontario barely produces half of the beef consumed in the province, leading to strong efforts to increase the number of cattle in provincial herds.

The prognosis going forward is very positive, including export opportunities. The US beef herd populations are down 60 percent in Texas due to the 2012 drought and the 2013 drought in Oklahoma, another key production state, saw inventories drop a further 20 percent. Due to factors such as continuing low water and drought, the ability of the US market to rebound is very limited, noted Mr. Potter, as a result he said “New Zealand and Latin America are shipping a lot of beef into North America.”

Because of the relatively small size of the Ontario share of the market, efforts to expand the province’s herds will not likely impact the supply equation significantly, he added.