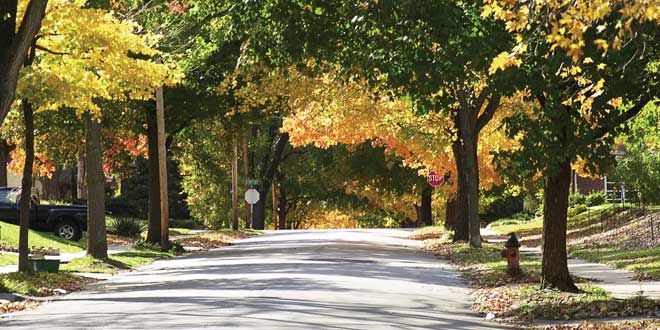 MINDEMOYA—Central Manitoulin Mayor Gerry Strong was all smiles as he acknowledged a $1.44 million grant from the provincial government that will allow the Yonge Street reconstruction project in Mindemoya to begin sometime this spring or early summer.

“We have just received a grant from Infrastructure Ontario for $1.44 million,” said Mayor Strong at the March 13 Central Manitoulin council meeting. “I have to congratulate staff for their hard work and perseverance in sending this application out three times. It is through their efforts that this project has been made possible.”

“I hope the community will be patient,” interjected Councillor Gloria Haner, who noted that despite the inconvenience presented by the construction work, the resulting improvements in safety will be worth the effort.

“This is an important project for our community and its safety, especially for our school children,” agreed the mayor.

“A strong, prosperous Northern Ontario requires modern and efficient infrastructure,” said Minister of Rural Affairs Jeff Leal in announcing the grants through a press release. “Through this fund, our government is helping communities renew and replace roads, bridges and other critical infrastructure that will attract investment, create jobs and help drive economic growth.”

“Investment in building and maintaining essential infrastructure is important to our rural and northern communities,” chimed in David Orazietti, MPP for Sault Ste. Marie. “I am pleased that our government is helping ensure the prosperity of Northern Ontario by providing this financial support for critical infrastructure projects in our communities.”

“Our government continues to invest in new and modern infrastructure that is building stronger communities, growing regional economies and creating jobs across the north,” concluded Minister of Northern Development and Mines Michael Gravelle, also in the release. “By investing in these crucial projects, we are expanding opportunities for Northern residents and businesses and improving the economic well-being of the province.”

The reconstruction will take place between Highway 542 and Anglin Street in Mindemoya, noted Central Manitoulin municipal coordinator Silvio Berti. The work will include parts of Anglin, Thorn and Duke Streets.

“There are issues of sightlines, including a blind spot,” said Mr. Berti. “The work will provide better sightlines, curbs gutters and drainage.”

Currently driving up Yonge Street a rise impedes the view as motorists approach Central Manitoulin Public School. “You come up over the rise and the school is right there,” he said. “It was on the basis of public safety that we made this application.”

The applications have been fast and furious on this project, Mr. Berti admitted. “I have applied for this project myself twice in the 15 months I have been here. I think there have been three or four applications, certainly numerous times.”

The province has been planning roadwork on Highways 542 and 551, but it is unclear as yet whether that work will take place at the same time.

“It would be nice if it was done around the same time,” said Mr. Berti. “It would be a shame for the roads to be torn up twice.”

Mayor Strong agreed. “I look forward to the province working with us on this project,” he said.

According to the release, the Ontario government is investing close to $27 million to support improvements to critical infrastructure while creating local construction jobs in Northeastern Ontario. The province is supporting 28 projects through the Small, Rural and Northern Municipal Infrastructure Fund, which is providing $100 million to help municipalities across the province build and maintain key infrastructure.

Central Manitoulin is not the only Island community celebrating provincial largesse this month. At a Billings council meeting held earlier this month, Mayor Austin Hunt read a letter from SRNMIF, stating in part, “we are pleased to inform you that 90 percent funding of $1,427,400 has been provided.”

“This is a real coup for the township,” agreed Councillor Brian Parker.

Mayor Hunt explained that the Billings funding will go towards a new system upgrade to its water treatment plant which will switch it from a high pressure system to a low pressure system and cover the replacement of equipment at the plant.

Not everyone was celebrating success in this round, however. Alton Hobbs, clerk of Assiginack Township, told the Recorder in an interview earlier this month that his municipality “had applied for $1.3 million for membrane (filter) replacements at both our water plants,” but were turned down in this round of funding.