LITTLE CURRENT—The final game of the Northern Ontario Hockey Association (NOHA) Midget B Tournament of Champions started out looking good for the host Manitoulin Panthers, who were facing the Blind River Outlaws for the championship, but what looked like an early goal did not make the scoreboard. The Outlaws drove back with a vengence just a few seconds later, as Blind River’s number 4 Liam Hamlin scored the first goal to go up on the boards assisted by number 8, Ben Albert, on a power play following a penalty levied against Manitoulin Panthers number 14, Carter Noble.

A second goal followed with 11:16 left in the first period when the Outlaws’ number 4 fired another shot into the Panther net, assisted by 10 Lawrence Payette and number 8 Ben Albert. Less than two minutes later it was 3-0 for the Outlaws as number 8 scored with 9:55 remaining in the first, assisted by number 4 Liam Hamlin.

The period ended 4-2 when Blind River’s number 10, Lawrence Payette, scored an unassisted goal with only 2 minutes left in the period.

Blind River came back with two goals, however, one by number 14 Alex Sidock, assisted by number 8 Ben Albert and number 4 Allan Galloway and another unassisted goal scored by number 12 Charlie Flintoff.

The Manitoulin Panthers came back with a goal by number 20 Brandon Pheasant, assisted by number 24 Patty Pitawanakwat and number 10 Hunter Abotossaway.

Then it was the Blind River Outlaw’s turn in the high scoring game with a goal by number 4, Liam Hamlin, assisted by number 12 Charlie Flintoff and number 14 Alex Sidock.

A jubilant Blind River Outlaws team secured the Tournament of Champions trophy for 2014, a victory made especially poignant as one of their teammates was facing a terrible personal tragedy in the untimely death of his father the day before. 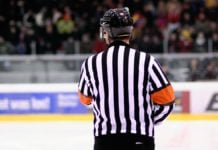